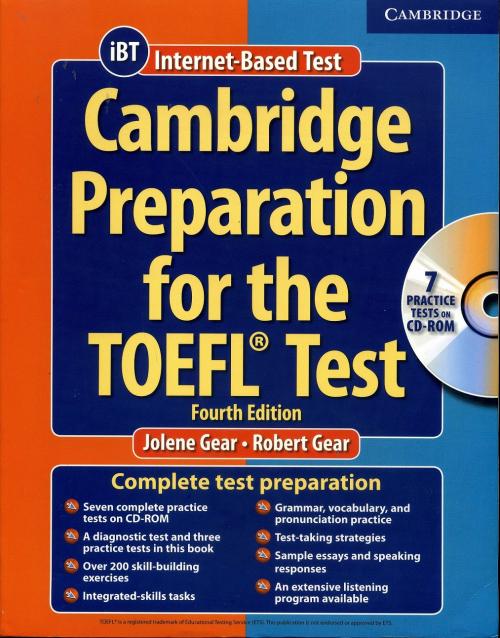 Cambridge Preparation for the TOEFL® Test, Fourth Edition, helps students master the language skills they need to succeed on the TOEFL® iBT and communicate effectively in an academic setting. Using an integrated skills approach that mirrors the structure of the TOEFL® iBT, this fully revised text is ideal for classroom use and self-study. The book contains hundreds of skill-building exercises covering all of the question types in the exam and four practice tests. A supporting skills section is provided to improve grammar, vocabulary, pronunciation and study skills. The CD-ROM includes the tests from the book plus three additional practice tests in an electronic format that simulates the online TOEFL® iBT. The audio program, available on Audio CDs or Audio Cassettes, contains conversations, lectures, and all listening material for all listening exercises and test questions. 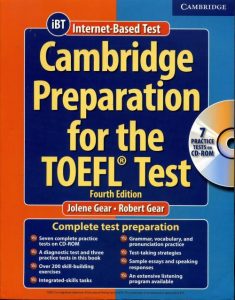 Well, it’s time to really analyze the book that I’ve been recommending to students for years. I’ve always known it’s not perfect, but Cambridge Preparation for the TOEFL has enough good aspects that it’s been my favorite TOEFL book for a long time. But don’t be surprised if I say a lot of negative things about the book in this post. While carefully going through Cambridge Preparation and listing the problems and benefits, I actually surprised myself with more flaws than I expected. There are plenty of pieces that could be better. But, then again, that’s true with every other TOEFL prep book I’ve used, and the strengths of Cambridge’s book are important enough that it’s still a valuable resource.

Let’s break it down and look at the details.

The front cover of Cambridge Preparation makes very clear one of the best features of this book: it includes a CD with 7 full-length practice tests. And what’s more, that software is very similar to the software of the actual TOEFL iBT. The buttons are the same. The clock is the same. It’s actually more similar in format than the practice tests that come with the Official Guide, strangely. For example, in the Official Guide software, the listening section has a clock which counts down even during the recordings. That’s not true on the real test, and Cambridge recognizes that—the practice tests on the CD only count down while you’re answering questions, not while you’re listening.

But I found a major issue with that software: it doesn’t work on new Macs. If you have an Apple computer that uses OSX Lion or higher (10.7+), then you can’t use the CD. That means you don’t have access to the audio for the three full practice tests in the book norany access to the additional four practice tests that are only on the CD (the three in the book are repeated on the CD).

Besides that, even if the software does work on your computer, it’s not very easy to use. You can’t easily navigate through the practice tests if you want to use the material for non-full-length practice. It freezes, sometimes. If you want to save your recordings, you have to make an account. It’s generally not very well-made software. But the fact that it is so similar to the real ETS tests helps to excuse that fact.

In the book, there are additional practice sections of each of the four skills, separated from each other, mixed in with the skill-building practice. If you add that to the full-length test practice, you have a very good amount of practice material altogether (assuming you can use the CD).

How is the quality of that practice, though? This is where one of the major issues with Cambridge Preparation lies. There are far too many poorly made practice questions, especially in the reading. For example, here’s the first question in the book, together with the related text:

Geologists have shown that for about 80 percent of the past 2.5 million years, ice-age conditions have prevailed on the Earth’s surface.

The word “prevailed” in the passage is closest in meaning to

The answer they give as correct is (B), and that’s fine; that’s the best answer. But there are two problems, here. For one, answer choice (A) actually works well in context and wouldn’t change the meaning much. That makes it too tempting. Besides that, answer choice (D) is a good synonym for “prevail” when it’s used in another sense—the more common meaning, actually. The TOEFL doesn’t put synonyms like that in the answer choices. You would never get a question like this on your test.

Questions like these are only 5%–10% of the reading, and they’re even less common in the other sections, but they appear there, too. In that same practice test, there’s a speaking task (question #5) which has you listen to two students discuss four different ways to memorize vocabulary, after which you summarize and pick one of the four as your favorite. On the real TOEFL, you’ll only hear two options in speaking task #5. That may seem like a small detail, but it greatly changes how you manage your time while speaking.

These problems are relatively uncommon, but they’re important to note. When the practice is good, it’s very similar to the real TOEFL. The listening recordings are almost exactly what you’ll hear on the test. The reading passages are all well done. The essay questions are generally accurate. Sometimes, though, it does have big flaws.

Those good parts help to balance the too-short explanations a bit, but not totally. The book could still be improved here because this is one of the most important parts of areally good preparation book: you need to learn from your mistakes if your scores will increase. Without a good explanation, it’s hard to learn.

Now that I’ve written a lot about Cambridge’s problems, let’s talk about why I still recommend it to students.

Cambridge Preparation gives more skill practice than any other book I know of, and it gives good practice. There are lessons and exercises for every single skill that you need on the TOEFL, and they’re organized into step-by-step lessons that start from the very basic skills and build up to more test-like practice. They include topics like transitions, paraphrasing, understanding connections made by referents (such as pronouns), organizing your essay, and others. This makes Cambridge very valuable for long-term TOEFL preparation.

There is one more problem, though. And this is really a big problem for many students: you need the 8 additional audio CDs to really make use of this part of the book (the most important part). It’s possible to buy only the book and CD-ROM without the audio CDs, and that can be confusing.

But those audio CDs aren’t cheap, either; they’re much more expensive than the book alone. But if you have them or can afford them, the listening exercises (and the related speaking and writing) are just fantastic.

Authenticity of practice material: B-

Amount of practice material: A

Test strategy and advice: A-

If you have a month or more to prepare for the TOEFL and you’re going to spend a significant amount of time preparing, then Cambridge has great skill-building exercises that’ll be very helpful (if you don’t mind spending the extra money for the CDs). For test-like practice material, though, there are better books. And if you prefer to learn online from videos, there’s our premium TOEFL prep as well.