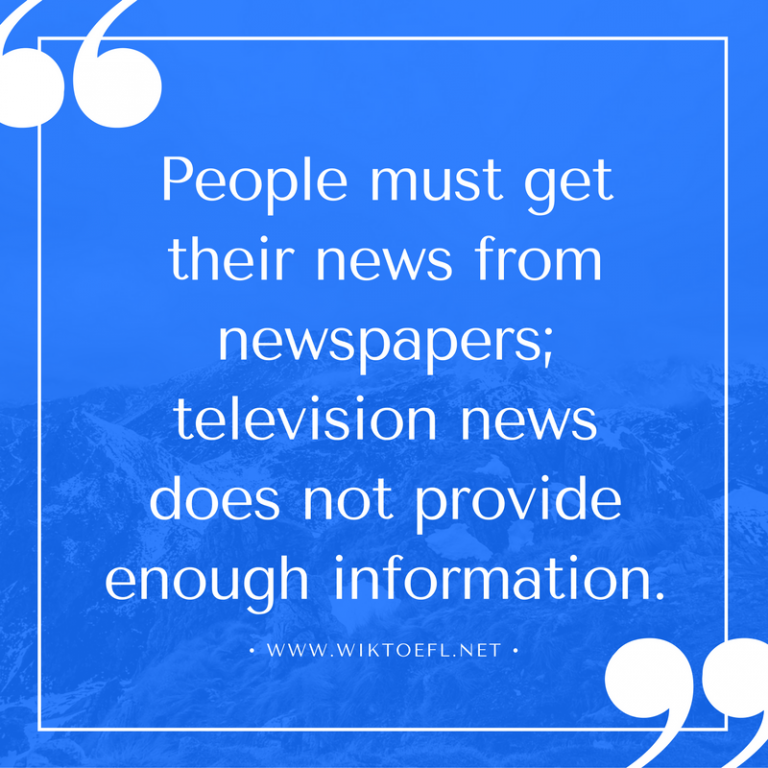 People must get their news from newspapers; television news does not provide enough information.

Some people insist upon reading newspapers front to back every day. They should not bother wasting their time. Instead, I strongly believe people should get their news from television, not from newspapers.

First of all, television is more up-to-date than newspapers. TV networks can provide us with live coverage of events practically anywhere in the world, so we can watch he events as they happen. On the contrary, by the time a newspaper goes to print the next day, the news is usually old. My country, Korea, recently elected a new president. I watched the votes being counted live on TV. The next day, the newspapers told me news I already knew. We live in the Information Age. Newspapers are just behind the times. It is absolutely unnecessary to read newspapers telling us what we have already witnessed on TV.

Another reason television news is better is that the news changes very quickly nowadays. Our world is so fast-paced that the news constantly changes, and newspapers just cannot keep up. However, television news can. Lately, the world’s economy has been going up and down, even in the same day. TV news can capture these changes no matter when they happen. Newspapers can only change their news once every twenty-four hours. That is not fast enough.
Furthermore, what good is reading a long article about a news event that is totally different now than it was when the journalist filed his report? It is useless. But TV, thanks to its fluid nature, provides instant analysis of changing news stories. This is the information I need to know.

Television news provides much better information than newspapers do. TV news can provide instantaneous information, and it can cover the news anytime it suddenly changes. It is no wonder many people prefer watching 24-hour cable news networks like CNN to reading newspapers.