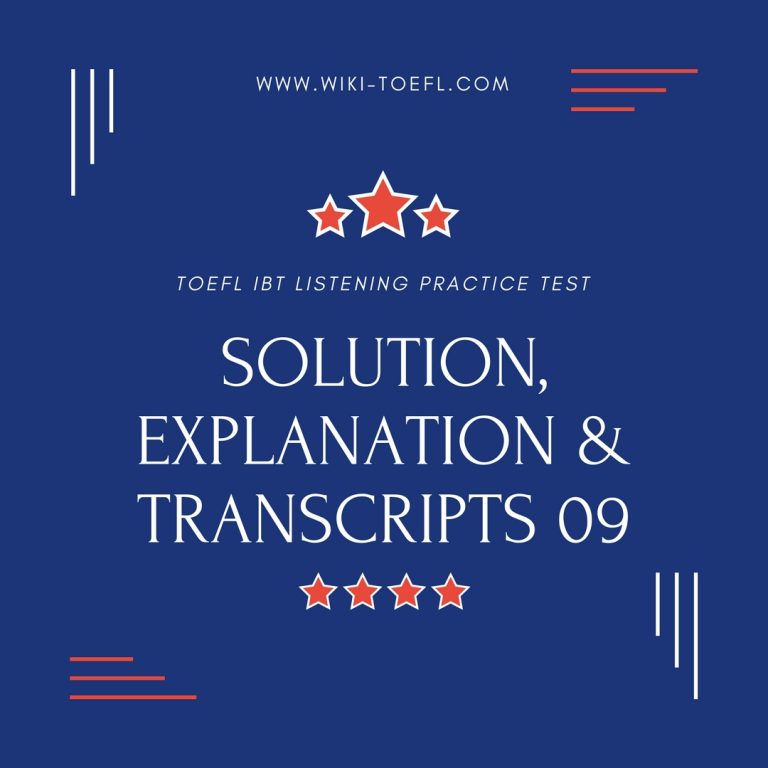 The students mainly discuss the man’s upcoming art show. The woman says Hey, I heard about your senior thesis show in Gallery Two! That’s great! I’m so proud of you, Malcolm. The man then talks about his sculpture, which will be in the show. (2.1)

The man’s sculpture includes boxes of different colors: This time it’s three boxes—one red, one blue, and one black. It also includes different styles of music: There’s a different style of music for each color. The red box plays Dixieland jazz, the blue one plays solo saxophone, and the black one is all sad violins. (2.2)

The man says Actually, I read an article on this topic about a year ago.this study about the moods of music… showed that people sort of think of different kinds of music—the different sounds and tones of music—in terms of colors. (2.2)

The woman’s purpose is to explain a possible use of her photograph. She is talking about a black and white photograph of benches covered in snow, which might appear in next year’s catalog because the dean liked it. (2.3)

The professor discusses how glaciers are created: You might expect that heavy snowfall is the main requirement for the formation of a glacier; For a glacier to form, the snow can’t melt. The professor also discusses the movement of glaciers: …part of the ice moves over the edge of the hollow and starts moving down the valley. Large glaciers usually move faster than small ones. Also, the movement is faster in the summer…; Most valley glaciers move at a rate of… (2.1)

The professor says Snowfall alone isn’t enough. For a glacier form, she snow can’t melt. It has to be conserved…

The professor says Most valley glaciers move at a rate of… oh … between a few inches and a few feet a day. But some glaciers—called surging glaciers— can travel as much as 300feet a day. (2.2)

The professor implies that each design gives the audience a different experience. The professor says Each of these styles has advantages and disadvantages, and each is good for certain types of plays. Then he discusses how each stage design affects the experience of the audience. (2.4)

The professor says However, the proscenium arch also creates a distancing effect—which is…a disadvantage for others; …for some plays—for, example, close-up views of real life—the proscenium is sort of a barrier between the actors and the audience. (2.2)

The professor says … there s been a movement to bring theater closer to real life…a movement toward more informal, more intimate theater. Thus, we have the arena stage…; The actors are in the center, so everyone in the audience can be close to them. The effect is a sense of intimacy, a kind of closeness that comes whenever people form a circle. You can infer that an intimate drama about everyday life would best be produced on an arena stage. (2.4)

The professor’s purpose is to describe the origins of the arena stage. The professor says The arena is the oldest style of theater. Then he mentions early theatrical performances such as ceremonies, rituals, and dances, which all took place in a circle. (2.3)

The student wants to discuss the topic of her research. The professor says …you wanted to talk about your research ?; You1re studying goose populations, right? The student says Well, I was anyway. That’s what I wanted to talk to you about. I think I want to go in a different direction. (2.3)

The professor means that results are tragic when airplanes strike birds. The woman tells about an airplane accident in which several geese were sucked into two of the engines, causing a crash in which the whole crew was killed. The professor responds by saying Birds and planes don’t mix, emphasizing the tragic results of such encounters between birds and planes. (2.4)