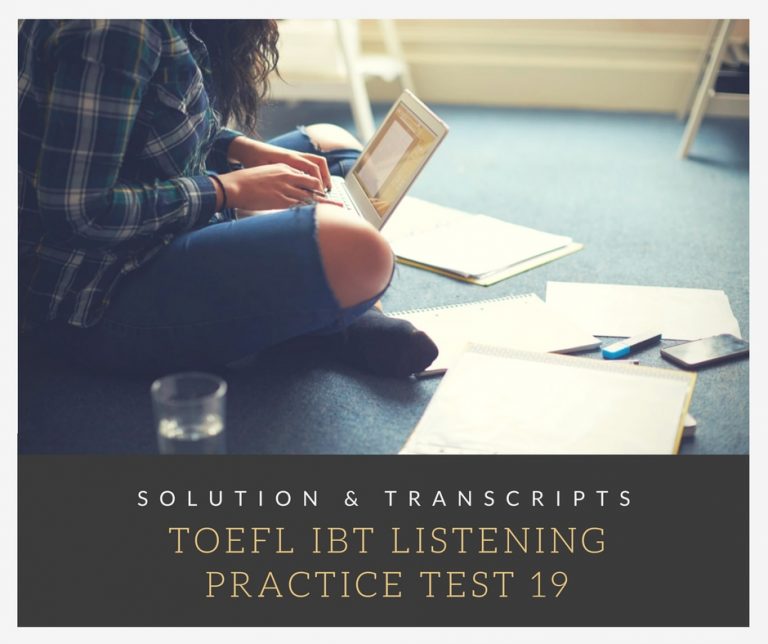 Listen to part of a lecture in a psychology class.

W: So. we have been talking about human cognitive and social development. Now, I’d like to move along to discuss Abraham Maslow’s hierarchy of needs, a very influential theory that has been widely applied both inside and outside the field of psychology in, um, education, social work, and even criminal justice.

Now, Maslow began his career studying the behavior of monkeys, and, um, one of the most interesting things he noticed was that some of the monkeys’ needs took precedence over others—some needs appeared to be more important. For example, if the monkeys were both hungry and thirsty, they would seek water before food. See. you can only live for a few days without water, but food . . . well, food is still important, you still have to eat, but the need for water is stronger. The monkeys also needed to play, to get exercise, but the needs for food and water were more pressing. Out of his observations of monkeys and later observation of people, Maslow developed his ideas into the now- famous hierarchy of human needs.

Let’s take a look at each layer of these needs in greater detail. As the monkey story illustrates, the first layer—the physiological needs—is the foundation, the needs that must be met first. Unless you get enough oxygen, water, protein, salt sugar, vitamins, and minerals, and unless you maintain a healthy pH balance, body temperature, and so on, you won’t live long enough to worry about very many other needs.

Moving on . . . the second layer of needs is, uh, the need for safety and security. So, let’s say you meet all your physiological needs. Soon, you’ll probably start thinking about finding stability and protection, developing structure, creating order —those kinds of things. Defined negatively, when you’re no longer hungry and thirsty, fears and anxieties are your next concern. You want to find a safe neighborhood, job security, a retirement plan, and so on.

Meet these needs, uh, and you’ll focus on the needs for love and belonging, which is the third level in MaskivA hierarchy of needs. You have your food, your comfortable shelter, your job security, and you begin to feel the need for friends, a partner … a sense of community even. If you don’t meet these needs, you’ll grow susceptible to loneliness and social arodebes a major problem in modern urban societies, uh, alienation. There are socially acceptable ways to meet these needs —getting married, joining a club or church-and less socially acceptable ways, like joining a gang or getting involved in a drug culture.

Now, we’re at the fourth level, esteem needs, and here pay attention Maslow notes two Subsets. The lovwr one is the need for respect from others status, fame, glory, recognition . . , get the idea? The higher form involves the need for selfrespect, confidence, uh, achievement… freedom, even. Now, this stratification of esteem needs is often debated .. though, I think, Maslow had it right in the fist place. Self-respect is the ‘higher’ form. Unlike the respect of others-and we all know how fickle that is-once you gain self-respect, ift a lot harder to lose! Fail to meet your esteem needs, and you’re a candidate for some significant psychological problems.

Maslow didn’t believe humans could meet all four levels of their needs and just stop and be content. They would continuously need to grow, emotionally, cognitively, and socially. This is what he refers to as “self-actualization,” the fifth level. Few people meet all four preceding levels of their needs, so Maslow had less of an observable basis to define what self-actualization meant. And, let’s face it. this level is also the most abstract, the hardest to pin down. He did point out that self-actualized individuals, at least the ones he observed, tended to be autonomous, not overly concerned about social norms, yet at the same time had a strong sense of ethics and concern for the human species. They demonstrate a non-hostile sense of humor as well as a sense of humility and respect for others. They tended to be very creative, inventive people. One thing educators, for example, have taken from Maslow’s theory, is the importance of making sure children have their most basic needs met as forming an important foundation on which to teach them not only knowledge, but also the values of self-respect and respect for others. Let’s take a brief look at how this is done.

W: Uh, remember how I asked you if I could have an extension to finish my final paper for the term? Well, uh, I have a little problem.

M: Right, I said that you could hand the paper in on Thursday morning, before I leave for my conference. Oh, that’s tomorrow already! OK, so what’s the problem?

W: Well I, uh, my computer crashed, and I lost the paper, all my notes, my final revisions, everything!

I don’t know what to do now—I really put a lot of work into this paper… remember how I showed you my draft twice? I don’t want you to think that I

M: OK, look… these kinds of things happen. Have you checked with the computer support department to see if they can recover your paper from your computer? A guy named James over there is really great; he helped me with a similar problem once. Why don’t you talk to him and see what he can do?

W: Yeah, I know him; I already went there this morning. He said my computer had this big virus and that’s what crashed it, and, well, it pretty much ate my hard drive.

M: I see. Hmm . . . well, I still need your paper by tomorrow, so that I can get the final grades in before I leave. You still have your last draft that I commented on. right?

M: Now, I realize that I handed the most recent one back to you last week, but why don’t you try to outline some of the major revisions you made? Then, you can type it all up in one of the computer labs, and get it to me by tomorrow morning. It just isn’t  possible for me to give you an extension beyond that. Unfortunately, I don’t get to decide when grades are due.

W: Well, I’ll give it a shot. But I know it’s not going to be as good as what I wrote before the computer crashed.

M: I understand that, Joyce, but we don’t always get to choose our deadlines, so just do the best you can and get it to me by tomorrow, ff you don’t agree with the grade you end up with, we can discuss it before next semester starts up. Your second draft showed that you made considerable improvements over your first, and I always consider a student’«; efforts toward improvement a factor in my grading

W: OK, thanks Professor. I’ll get the paper to you first thing in the morning.

M: Great, I can’t wait to read it. I’ll be in my office between nine and ten. Good luck!