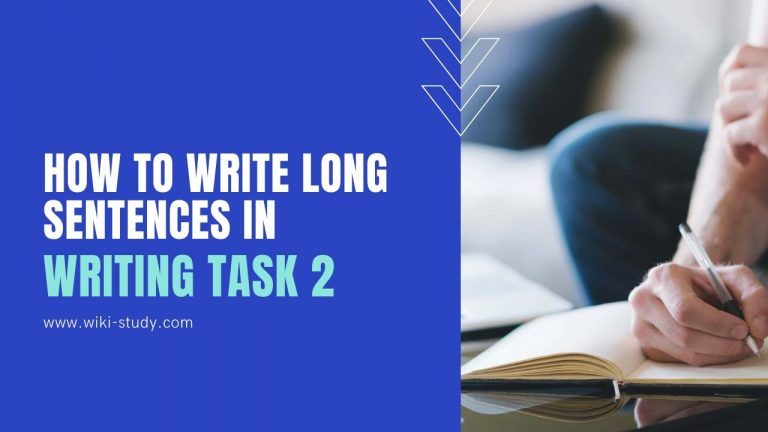 Children are watching too much TV.

Will definitely ruin your band point brutally. These sentences, as you can see, are “too modest” in length. In Speaking we can say short sentences, but in Writing we have to write long sentences.

Why does IELTS require long sentences?

IELTS is a test to mock a candidate’s language ability. If the candidate, despite being good in English, writing only short and speaking briefly, the examiner will not have a basis to assess their language ability. Therefore, IELTS test takers always try to write or speak long to have a “land” that shows all their vocabulary and grammar.

How to write long sentences?

There are some very easy ways to turn a short sentence into a “luridly flowing poetry” in Task 2:

If you notice, the words “bad”, “good” and “too much” above do not tell the reader what specific information. If you are using these words, ask yourself “how bad is it?”, “How good?” and “how is how much?”

If you think about it, you will find that you can get closer to it:

Too much TV => more than you should

So, we can rewrite the sentence:

Smoking is bad for health

Playing sports is good for health

Children are watching TV far more often than they should.

B. Addition of words

Similar to the principle explained above, we can make sentences longer by modifying existing words, for example:

Smoking? How to smoke?

(?) Is there any other way of saying longer?

=> Smoking on a regular basis is bad for health

=> Participating in a number of competitive sports is good for health

(*) Note, with plural nouns, you can take advantage of the words “many” such as: a number of, various, a variety of, …

=> Children before secondary school are watching TV far more often than they should.

Relational clauses (which, who, that, whose, whom, …) are easy tools to extend sentences. You will simply use relative clauses to expand the meaning of a noun, or a whole sentence. For example:

Smoking, an activity which most men in Vietnam do everyday, is bad for health

Children are watching TV far more often than they should, which affects their mind and body in a negative way.

In fact, this principle is similar to the explanation. You can, instead of just naming a noun, attach a certain ownership to the noun. For example:

Smoking is bad for people’s health.

Here are 4 common methods to expand sentences both in terms of meaning and number of words. You can use only 1, or you can combine 2,3, even 4 methods to write sentences. However, it should be noted not to abuse these methods to create clumsy sentences, explain unnecessary things.