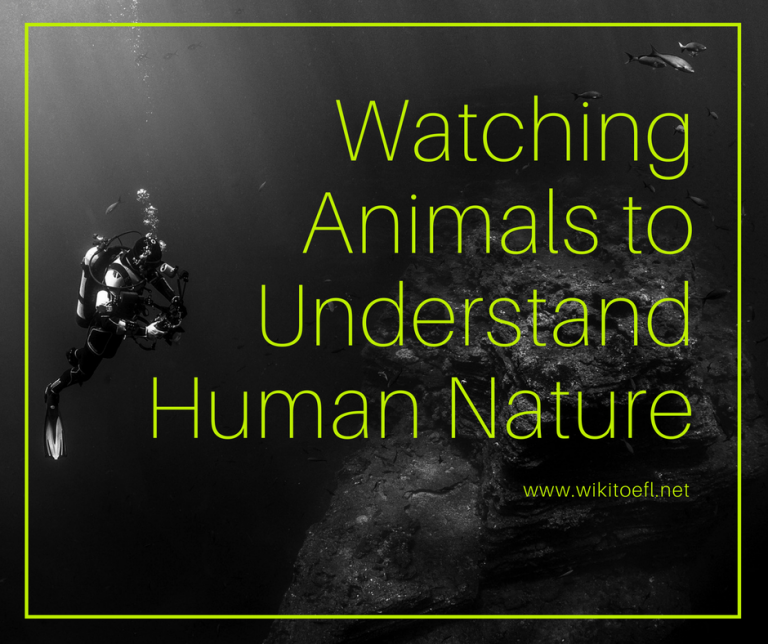 Observing or studying animals teaches us a lot about human nature.

Some people believe there is nothing humans can learn by watching animals. I could not disagree more with them. Actually, we can learn much about human nature by observing or studying different animals.

One thing to remember is that many animals have emotions that are just like those humans have. Lots of animals show a wide range of emotions. These can include happiness, sadness, fear, anger, and shyness. And, surprisingly, animals often behave in ways that humans do, too. For example, I just got a puppy a few months ago. I have been trying to potty train her so that she goes to the bathroom in the proper place. When she does a good job, I praise and reward her, so she becomes very happy and gets very excited. Of course, sometimes she goes to the bathroom in
the wrong place. She sees my disappointment and becomes disappointed herself. These are the same emotional reactions a human would have. Clearly, we can anticipate human actions by watching those of animals.

We can also pay attention to how animals cooperate with one another to understand how humans do the same. Many animals have very close-knit societies. For example, some primates, like chimpanzees and gorillas, live in fairly large groups. They share duties with one another. These jobs include finding food, raising babies, and protecting the group. In some ways, these organizations are just like human ones. Scientists studying animals can often make comparisons between animal and human societies. In some cases, they have learned much about human behavior by observing animals.

We should remember that, in many cases, animal behavior mimics human behavior. Animals feel emotions just like humans do, and they cooperate in some of the same ways that humans do. Believing we can learn nothing from animals is a big mistake.