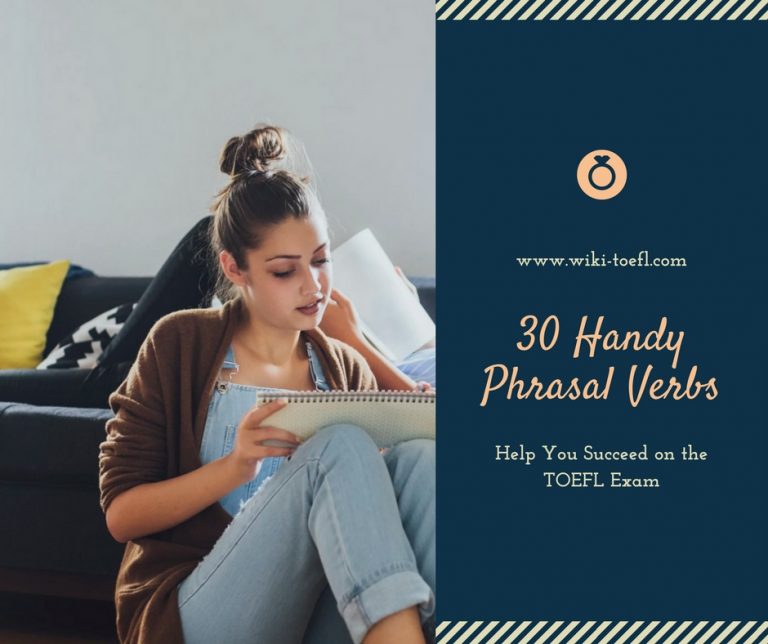 What Are Phrasal Verbs?

Phrasal verbs are formed by linking one verb to another word (typically a preposition or an adverb). The result is a new expression that has a different meaning from the original verb.

They are very frequently used in English in both speaking and writing. According to the “Longman Grammar of Spoken and Written English,” phrasal verbs occur:

You will be doing academic writing for the TOEFL, so you can expect to see and use plenty of these handy verbs.

How Phrasal Verbs Can Help You on the TOEFL Exam

Because phrasal verbs are used quite frequently in conversational English, understanding them will help you a lot on the listening and speaking sections of the TOEFL exam in which you listen to people talking to each other.

Most conversations on the TOEFL exam in both speaking and listening sections are between students discussing campus related topics. These conversations are generally neutral towards informal, so you may hear quite a few phrasal verbs.

You may want to use neutral to formal phrasal verbs in writing in both the independent and the integrated task and probably in speaking as well. You should avoid very informal ones as the general tone of the TOEFL exam is academic. That is why the phrasal verbs in the list we have here are suitable for both neutral and formal English.

When you decide to use phrasal verbs in speaking or in writing, make sure you use them correctly.

Look the word up! (look up is a separable phrasal verb)

You should look into the matter. (look into is an inseparable phrasal verb)

I made that story up. (story is the object of the phrasal verb made up)

My car broke down. (broke down is intransitive, it cannot take an object)

In the case of transitive verbs with really long objects, we can move the object between the verb and the particle if we replace the object with a shorter word. This is called shifting.

She made a very funny story up. (correct, but the object is too long to comfortably place it between the verb and the particle)

She made it up. (we replace the object, a very funny story, with it and we can move it between the verb and the particle)

Now that you know these important rules, you can start learning some phrasal verbs!

The following list contains 30 phrasal verbs that can be used as either neutral or formal words, so you can confidently use them in academic contexts like the TOEFL exam.

Meaning: To explain the reason for

Example: You must adhere to the terms of the contract.

Meaning: Mention in an indirect way

Example: She kept alluding to our agreement, but she didn’t want to reveal it.

Meaning: To cause something bad to happen, especially illness

Example: His heart condition was brought on by his diet.

Meaning: To start discussing a subject

Example: She brought the matter up very late so they didn’t have time to discuss it properly.

Meaning: To happen, especially by chance

Example: Increased unemployment has come about through automated production.

Example: They are cutting back expenses.

Meaning: To succeed in living or working without

Example: We can do without help from you.

Meaning: To start a new project or activity, usually one that will be difficult or take time

Example: After graduating from university, she embarked on a career in banking.

Meaning: To continue doing something until it has been completed

Example: You will need to follow through with some reading if you want to master the subject.

Meaning: To not approve of something

Example: Failure to attend classes is frowned upon.

Meaning: To make people understand something

Example: The teacher managed to get across how important it was to attend lectures.

Meaning: To be heard by a lot of people

Example: News of his promotion got around very fast.

Meaning: To try to suggest something without saying it directly

Example: What are you getting at? Was my presentation too long?

Meaning: To start doing something again after not doing it for a period of time.

Example: Let’s get back to discussing how this happened.

Meaning: To feel happy about something that is going to happen

Meaning: To try to discover facts about something

Example: After several customers complained about late deliveries, they decided to look into the matter.

Meaning: To understand someone or something in a certain way

Example: What do you make of the teacher’s decision to shorten this course?

Meaning: To plan in detail how something will happen

Example: Her career was mapped out for her when she decided to take that job.

Meaning: To come together with someone

Example: Let’s meet up and discuss how we are going to go about this project.

Meaning: To reduce the number of possibilities

Example: The detectives narrowed down the list of suspects to just two.

Meaning: To suggest an idea, opinion so that it can be discussed

Example: The proposals were put forward last week, but the committee didn’t have time to discuss them.

Meaning: To delay doing something especially when you don’t want to do it

Example: Are you putting off writing that essay because you can’t concentrate right now?

Meaning: To do something unpleasant in order to solve a problem

Example: We must resort to legal action of they don’t offer compensation.

Meaning: To stop considering something as a possibility

Example: The CEO said that yearly bonuses can be ruled out in light of the financial crisis.

Meaning: To tell someone your ideas so they can give you their opinion

Example: I have a few ideas for tomorrow’s meeting. Can I run them byyou?

Meaning: To persuade someone not to do something

Example: Her parents talked her out of living in a rented flat.

Meaning: To consider a problem carefully

Example: You should think it over before handing in your resignation.

Meaning: To develop in a particular way

Example: The presentation turned out well, considering how little you prepared for it.

Meaning: To almost be in a particular state

Example: His speech was so good, it was verging on genius.

Once you start using them on the TOEFL exam as well, you’ll start feeling more confident about your language level!