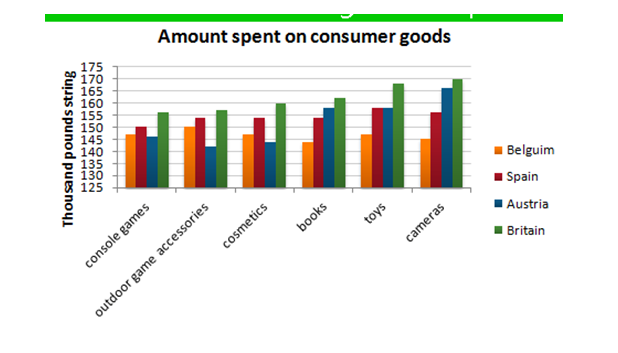 Introduce you to practice IELTS writing 5 writing Task 1 special samples or 8.5 Writing. With 5 sample articles you can use to refer to good ideas, special sentence structures used for writing, and how the writer connects the paragraphs together to create a coherent link.

“The bar chart below give information about five countries spending habits of shopping on consumer goods in 2012. Summarize the information by selecting and reporting the main features, and make comparisons where relevant.”

The chart compares the spending habits of shoppers in five European countries on six consumer products, recorded console games, outdoor game accessories, cosmetics, books, toys and camera. Overall, more money was spent on the latter two than on any other product.

It can be observed that in Britain, the highest amount of money was spent on camera (more than 160 million pounds), while similar amounts were spent on console games and outdoor game accessories. The Austrian spent the second highest amount of money on the first three products while they stood last in the latter three. It is also revealed that Spanish spent more money on toys than on any other product (a bit less than £ 150 million), but they also paid a lot for camera. Finally, Belgian spent the least overall, having similar spending figures for all 6 products compared in the bar chart.

To sum up, the British were the biggest spenders in all six categories among the nations compared in the bar chart while the lowest spending levels were attributed to the residents of Belgium.

“The chart below gives information about” Istanbul Promo plus “sales in 2007. Summarize the information by selecting and reporting the main features, and make comparisons where relevant”

The chart shows how Promo Plus in Istanbul fluctuated over a period of 12 months. It is observed that in the first month of 2007, Promo Plus sales stood at 200 million turkish lira and rose slightly to reach about 225 million in February. This was followed by another increase, although much steeper, in March when sales where almost 125 million turkish lira higher than February.

However, this upward trend was suddenly broken and sales plummeted dramatically over the next 4 months to reach a little over 100 million turkish lira in July. August sales showed a significant rise back to January levels as figures nearly doubled, but this was not to last as they dropped again in September to the same level as they were in July. October came with a small increase of about 100 million turkish lira in sales, after which sales figures levelled off and about relatively static over the last two months of 2007.

Overall, Promo Plus in Istanbul fairly relatively unchanged in 2007 as January and December sales were fairly equal. Also, sales were at their highest in March while the weakest sales figures could be observed in July and September.

“The graphs below show the development of the cutting tools made by stone, one was made 1.4 million years ago, and the other was made 800 thousand years ago, viewing from back view, front view and side view. Summarize the information by selecting and reporting the main features, and make comparisons where relevant. “

The given diagram illustrates the cutting stone tool and how it was advanced, from 1.4 million years ago to 800 thousand years ago. It can be clearly seen that the stone tool was improved into a sharper and better one, over the years.

The stone tool made 1.4 million years ago was more rounded at the top and bottom edges. From the front and the back view of the tool it is clear that the diameter in the middle was almost 5 cm and towards the top and bottom, it was around 3 cm wide. The side view shows that the tool was wider in the middle, with a diameter of around 3 cm and it tapered towards the top and the bottom ends. The back of the stone had fewer cuts than the front and they were also not very fine.

800 thousand years ago, this tool developed into a sharper, more refined tool. In the front and the back view it can be seen that the maximum diameter of the tool was the same as in the older tool, but it was more towards the lower side. The bottom tapered into a 1 cm point, but the top tapered more sharply into a 1 cm point. The side view makes it clear that it was much lesser in width (1.5 cm) than the older tool. The stone was more chiseled than the previous one.

“The graph below shows the pollution levels in London between 1600 and 2000. Summarize the information by selecting and reporting the main features, and make comparisons where relevant”

The graph shows pollution levels in London between 1600 and 2000. It measures smoke and sulfur dioxide in micrograms per cubic meter. According to the information, the levels of both pollutants formed a similar pattern during this period, but there were always higher levels of sulfur dioxide than smoke in the atmosphere.

Clearly air pollution was a bigger problem in London in the early 20th century than it is now.

“The charts below show the results of a survey about what people of different age groups say makes them most happy. Summarize the information by selecting and reporting the main features, and make comparisons where relevant.” 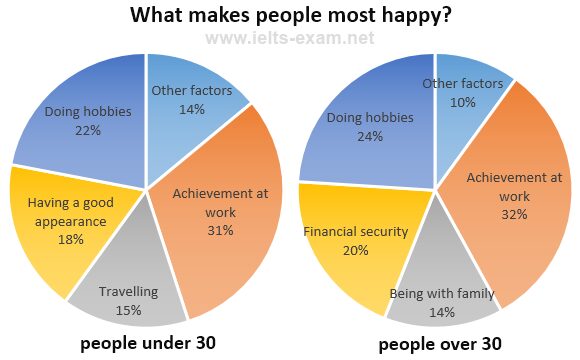 Firstly, let us look at the similarities. It is noticeable that for both younger and older people, the highest percentage says that achievement at work brings them most happiness: 31% for the younger age group and 32% for the older group. Doing hobbies is also very important for both groups: the second largest percentage of both age groups mention doing hobbies as making them most happy.

Turning now to the differences, many younger people regard having a good appearance as extremely important: 18% of them state this brings them most happiness. This is followed by 15% who state that travel brings them happiness. Neither of these two factors is mentioned by older people. Instead, 20% of older people report that having financial security is most important to their happiness and 14% say they feel most happy when they are with their family.

Above are 5 great special samples of IELTS writing task 1, we want to share for you who want to get to a high writing score. In the following articles, we will share more good examples with many different topics. Get ready for it!