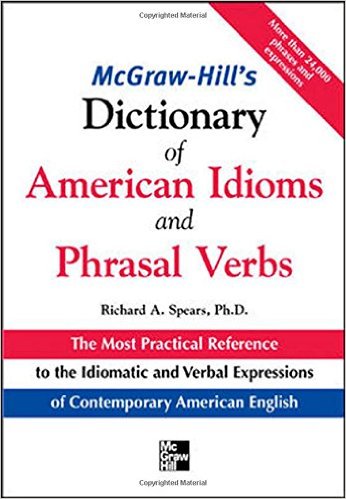 McGraw-Hill’s Dictionary of American Idioms is the most comprehensive reference of its kind, bar none. It puts the competition to shame, by giving both ESL learners and professional writers the complete low-down on more than 24,000 entries and almost 27,000 senses. Entries include idiomatic expressions (e.g. the best of both worlds), proverbs (the best things in life are free), and clich é s (the best-case scenario). Particular attention is paid to verbal expressions, an area where ordinary dictionaries are deficient.

The dictionary also includes a handy Phrase-Finder Index that lets users find a phrase by looking up any major word appearing in it.

With more entries than any other reference of its kind, McGraw-Hill’s Dictionary of American Idioms and Phrasal Verbs shows you how American English is spoken today. You will find commonly used phrasal verbs, idiomatic expressions, proverbial expressions, and clichés. The dictionary contains more than 24,000 entries, each defined and followed by one or two example sentences. It also includes a Phrase-Finder Index with more than 60,000 entries.

From the Back Cover

The most comprehensive, in-depth guide to common American idioms and phraseology available

The hardest part of getting the hang of a language is making sense of its idioms. From proverbial expressions such as “a stitch in time saves nine,” to idioms such as “dead ringer,” to such common verbal phrases as “put out” and “take on,” these colorful constructions, so abundant in American English, seem to serve no other purpose than to frustrate and confuse. But don’t despair! Thanks to the efforts of noted lexicographer Richard A. Spears, mastering American English idioms has never been easier.

McGraw-Hill’s Dictionary of American Idioms and Phrasal Verbs covers the full breadth and scope of idiomatic American English, making it an essential companion to standard desk dictionaries. An invaluable resource for ESL students, as well as writers, scholars, and public speakers, this reference combines in one volume the two most perplexing aspects of American English phraseology–idioms and phrasal verbs–providing ready access to the complete meanings and varying usages of thousands of common terms and verb constructs.

–This text refers to an out of print or unavailable edition of this title.

Richard A. Spears, Ph.D., was a professor of linguistics at Northwestern University before he turned to editorial work. He has authored more than 150 books and articles on various aspects of language. His main interest is in phrasal dictionaries and references designed for language learners.