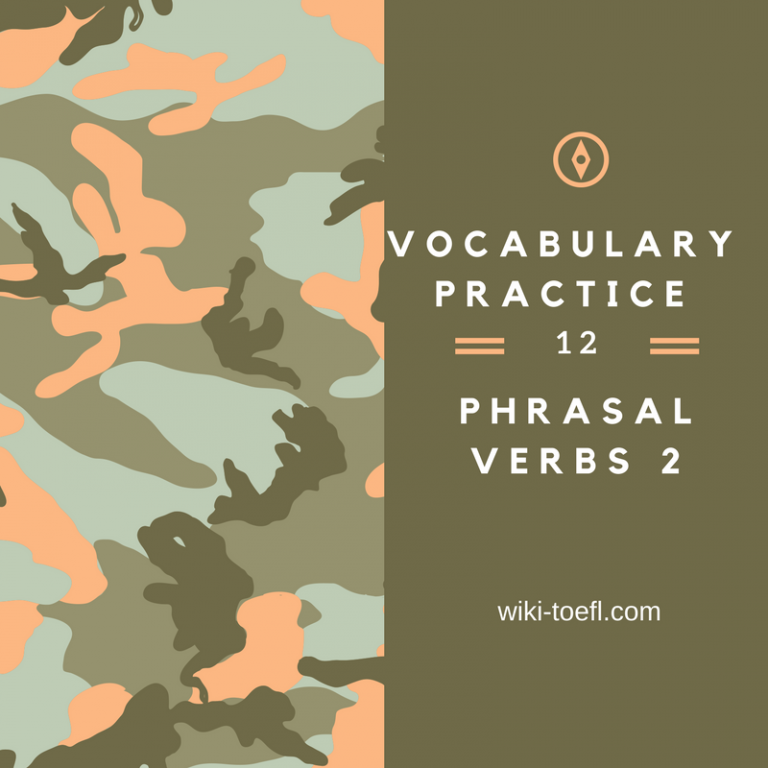 Exercise 1:Each of these sentences can be completed with come, get, give, go, or look to make a phrasal verb in bold. In some cases, more than one answer is possible. Make sure you use the correct form of the verb in each one. The phrasal verb is explained in brackets at the end of each sentence.

1. In rural districts, it can be difficult to _________ by without a car. (to work and operate efficiently)
2. I’d like you to _________ over these figures and tell me if you think the project is possible. (to check something carefully)
3. Large industries can no longer _________ away with dumping industrial waste in rivers. (to avoid being punished for doing something wrong or illegal)
4. Developed countries are usually able to _________ through a period of recession by drawing on financial reserves. (to manage to deal with a difficult situation until it is over)
5. People who have to _________ after elderly relatives or other dependents should receive financial support. (to take care of someone or something and make certain they have everything they need)
6. We decided to _________ through with our plans as soon as we had sufficient capital. (to do something you have planned or agreed to do, especially after not being sure you wanted to do it)
7. It can be very difficult to _________ down to studying for exams when the weather is nice. (to start doing something seriously or with a lot of effort)
8. Lights _________ out across the country as power workers went on strike. (to stop burning or shining)
9. The committee were asked to _________ into the latest crime statistics and try to establish a pattern. (to try to discover the facts about something such as a problem or crime)
10. After years of decline, government investment is revitalizing the area, and things are beginning to _________ up. (to get better, or appear to get better)
11. Scientists _________ across the cure by accident, while studying the health benefits of a rare species of plant. (to find something by chance)
12. Very few students _________ forward to their end-of-semester exams. (to feel happy and excited about something that is going to happen)
13. Generally, people are reluctant to break unpopular rules, but will try to _________ around them somehow. (to find a way of dealing with a problem or avoiding it)
14. The first step to a healthier lifestyle is to _________ up smoking. (to stop doing something you do regularly)
15. The governor _________ up against a lot of opposition from locals when she proposed building a jail near the city limits. (to have to deal with something difficult or unpleasant)
16. Even if you fail the first time, you should _________ on trying. (to continue doing something)
17. The anti-smoking message is finally _________ through to people. (to make someone understand what you are trying to say)
18. As ticket prices _________ up, fewer people go to the theater and prefer to stay at home with a video. (to increase in price)

Exercise 2: Instructions as above.
1. Doctors realized there was going to be a problem when several people in the same village ___________ down with suspected food poisoning. (to become ill with a particular disease)
2. People often ___________ up the idea of starting their own company when they realize the risks that are involved. (to no longer want to do something)
3. Before entering an agreement, it is essential to ___________ over the details very carefully. (to check something carefully)
4. People who live in close proximity to one another must learn to ___________ along with their neighbors. (to try to like someone and be friendly to them)
5. It was only after he ___________ into his inheritance after his father died that he was able to expand the company. (to receive money or property when someone dies)
6. After the revolution, it took almost five years for the country to ___________ around to opening its borders. (to do something after you have intended to do it for some time)
7. New legislation lays down strict penalties for vehicles which ___________ off excess exhaust. (to produce a gas or smell)
8. People who want to know how to ___________ about starting their own company should talk to a trained adviser. (to start dealing with a situation, problem, job, etc., in a particular way)
9. When supply of a particular good exceeds demand, it is common for the price to ___________ down. (to become cheaper)
10. Nothing ___________ of the company’s plans to develop solar-powered vehicles. (to be the result of something)
11. The final bill for the project will ___________ to almost $10 million. (to reach a particular total when everything is added together)
12. For most poor people, ___________ out of the cycle of poverty can be next to impossible. (to avoid or escape from an unpleasant situation)
13. In any dispute with an insurance company, it is usually the consumer who ___________ off the worst. (to achieve a particular result in an activity, especially a competition, fight, or argument)
14. It took a long time for the country to ___________ over the effects of the civil war. (to recover from something)
15. The threat of severe reprisals meant that many refused to ___________ themselves up to the police. (to surrender to someone in a position of authority, especially to the police)
16. Some people tend to ___________ down on others who are less fortunate purely because of their financial situation. (to think that you are better or more important than someone else)
17. The government had decided to stand firm on their decision, but under pressure from protesters, they decided to ___________ in and reduce tax on gasoline. (to stop competing or arguing and accept that you cannot win)
18. By the time the message ___________ through it was too late to evacuate the residents. (to be connected to someone by telephone, email, text message, etc.)
Don’t forget that many phrasal verbs can have more than one meaning. Try to develop your own written “bank” of the phrasal verbs you learn. This should show as many different meanings as possible for each phrasal verb. You should then try to remember these so that they become a part of your “productive” vocabulary.