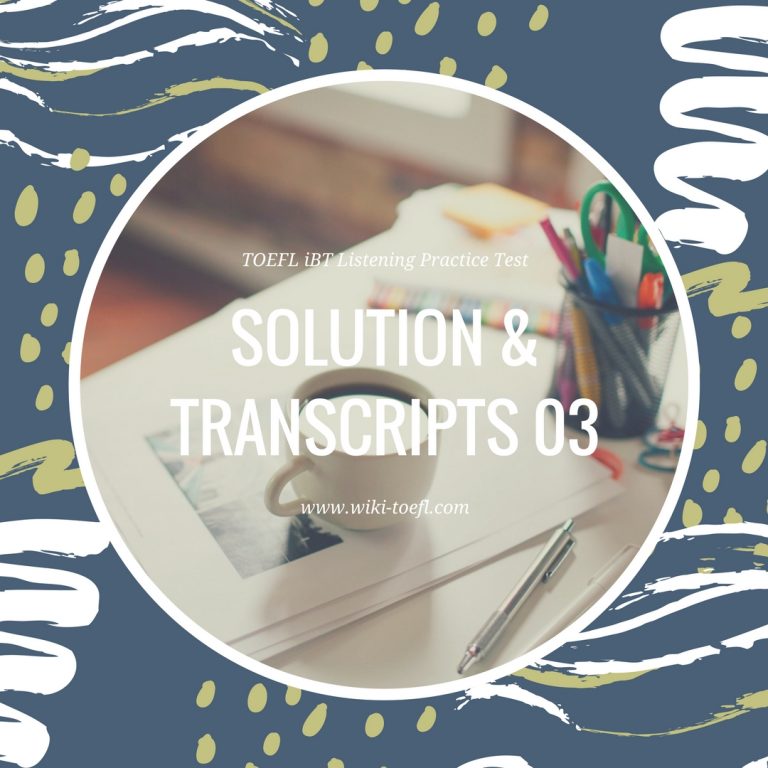 Narrator: Listen to part of a conversation on campus between two students.

Man: I wish I were as sure about my future as you seem to be. I… I realLy don’t know what I want to do after I graduate.

Woman: Well, have you talked with a counselor over at the Office of Career Development?

Man: No…I talked to my academic advisor, though.

Woman: That’s good, but it’s really better to see someone who specializes in helping people make career decisions. You see, an academic advisor is there to help you work out your academic program. You know, figure out what your major is going to be and which courses to take and all that. But a career counselor has a lot of experience and resources to help you decide what you want to do in the work world.

Man:Did you see a career counselor?

Woman:I sure did. Last semester. I was… well, I didn’t even know what I would be good at, for a career, I mean. So I made an appointment at the Office of Career Development, and I talked with a counselor.

Man:Do you remember who it was?

Woman:Sure. It was Ruth Jackson.

Man:Oh, but since I’m interested in careers for math majors, probably I should see someone else.

Woman:Not really. Any of the counselors can help you. Look, first I took some aptitude tests and something called a … uh … I think it was called a career inventory. Anyway, I took several tests, and then the counselor gave me some ideas about different careers. I even went to some group sessions with some other students for a few weeks. Mrs. Jackson was the group leader, so, um, that’s how I met her, and then I just sort of naturally started making my appointments with her when I needed some advice.

Man: It sounds like it took a lot of time. I’m so busy already.

Woman: Well, it did take time. Probably three hours for the tests, and I think I went to maybe four group sessions, and then I saw Ruth a couple of times. I guess about nine or ten hours probably. But it was worth it.

Man: So, is that why you decided to go into library science? Because of the tests and everything?

Woman: In part But, mostly it was because of the internship. You see, I also got my internship through the Office of Career Development. And when I was working as an intern in the public library, it all sort of came together tor me. I really liked what I was doing, and I realized that I didn’t want the internship to end.

Man: And you get paid for working there in the library too, don’t you?

Woman: I get paid, and I get credit toward my degree. But even better, I have a job offer from the library where I’m doing my internship.

Man: Wow! Are you going to take it?

Woman: I think so. I have to let them know next week. If I do take the job, I’ll have to go to graduate school to get a degree in library science, but I can do that part-time while I’m working, and I had thought about graduate school anyway. So, I’m leaning toward taking the job.

Man: That’s great, Anne. I’m glad for you. So, uh, I guess I’d better make an appointment with Ruth Jackson. Maybe she can find me an internship.

Narrator Listen to part of a lecture in a sociology class.

Social influence involves the changes in behavior influenced by the actions of other people. Social influence can come about for a variety of reasons, on a continuum from mere suggestion to, in the more severe form, well, to torture. How does social influence work? Well, first we must become aware of a difference between ourselves and the values or behaviors of other people. There are a great many studies of social influence that demonstrate how the presence of others can cause us to change our attitudes or actions. Studies show that people eat more when dining with others than, and I’m talking about dining out here, so they eat more in the company of others than they do when they’re alone. They also run faster when others are running with them. There’s even some interesting research on social influence among animals with similar results to… to those of human studies.

Probably one of the most interesting aspects of social influence is the pressure for conformity. Con-formity is a process by which an individual’s opinion or behavior moves toward the norms of the group. In a dassic study by Solomon Asch, seven people were shown cards with three lines drawn on them. Here’s an example:

So, they were shown the lines, and then they were asked to select the line among the three that matched the, uh … the … standard line. Here’s the standard. So there’s no question as to the comparison This has to be easy, right? Wrong. You see, Asch enlisted the cooperation of six of the seven participants in the experiment. On the first card, the six respond correctly—they . . . they identify the lines of the same length—so the seventh person, who is the only real subject in the experiment, well, the seventh person answers correctly, in agreement with the others. But on the next card, four of the cooperating participants choose an incorrect answer, but they’re in agreement, so the problem for the subject is whether to conform to the opinion of the peer group, even though the answer, uh, is in conflict with the answer that the subject knows to be correct.

So what do you think happened? Well, subjects who were tested alone made errors in answers fewer than 1 percent of the time. This was the control group. But of those tested in groups of seven, let’s see. uh, 75 percent yielded at least once to conform to a group answer that was ctearty incorrect, and on average, subjects conformed to the group in about 37 percent of the critical trials. This means that they were bring-ing their behavior into agreerrtent with group norms in … in spite of what they were seeing.

Later Asch manipulated the size of the control group … I’m sorry, the experimental group… to see whether group size would affect pressure, and it did, but probably less than you might expect. Um … groups of four demonstrated about the same results as groups of eight. Interestingly enough, a unanimous agreement by the group was more important than the number. In other words, a unanimous opinion by three exerted more pressure to conform than a majority of seven with a dissenting opinion in a group of eight.

Similar experiments have been performed in various countries, among diverse cultural groups, with, um, comparable results. Of course, people in cultures that emphasize group cooperation tended to be more willing to conform, but remember that many of the original studies were done in the United States where there’s a high value placed on individualism. In an interesting variation on the study, Abrams found that conformity is especially strong when the group is selected from among those people that the subject dearly identifies with, either because, um … they have characteristics in common or… or they know each other and interad in a peer group outside of the experimental situation.

So what does ail of this mean in the real world? Well, since group members can influence one another to conform to the opinion of the group, the group… decisions of a group, uh, may be called into question. What about decisions by political committees or parliaments? What about juries who are charged with convicting or acquitting an accused defendant? Clearfy, social influence will play a part in these critical group decisions.

Also interesting is the fad that after a decision is made by a group, there’s a tendency to solidify, and by that I mean that the group becomes even more convinced of the validity of the group opinion. Um … this may happen because individual group members who strongly support the group tend to be more popular with the group members.