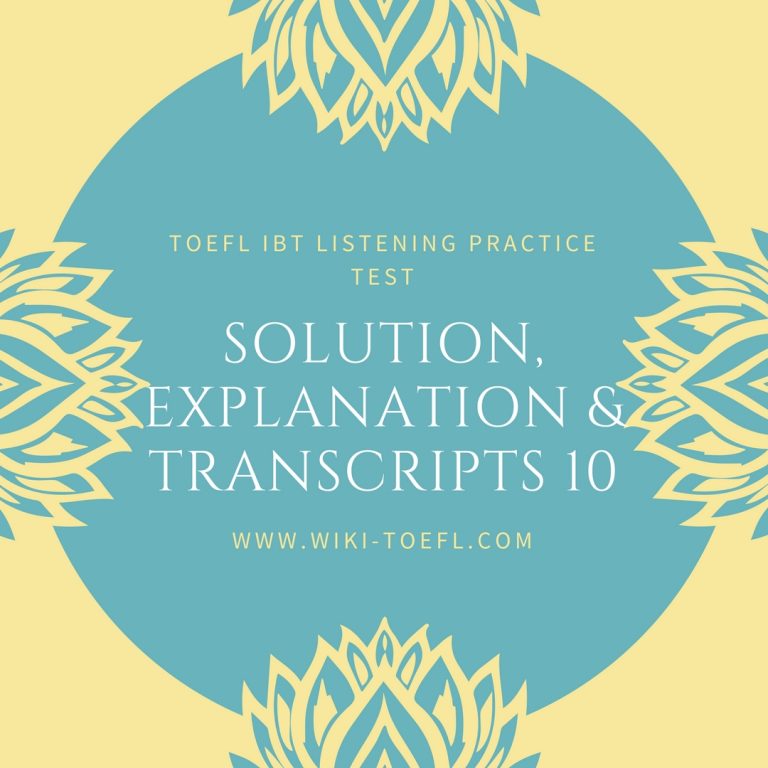 Listen to part of a conversation between a student and her tutor.

W:There’s something I’ve always wondered about. OK. A glass of water is crystal clear. A bathtub full of water looks faintly blue. And the water in a swimming pool is light blue at the shallow end and a darker color blue at the deep end. Does water have a color? I mean, its own true color?

M:Believe it or not, it does.

M:It’s blue, like a piece of blue glass. And like glass or any other relatively transparent substance, the thicker it is, the deeper the color. That’s why a swimming pool is a darker blue at the deep end.

W:OK. Then what I learned as a kid was wrong. In grade school I was taught that water doesn’t have a color, that it’s clear, and clear isn’t a color. But my own eyes tell me otherwise. So, why is this? I mean, why is water blue, like blue glass?

M:It’s because water transmits light of every color, but it’s clearest for colors with shorter wavelengths. That’s why its peak transparency is in the blue–green part of the light spectrum.

W:That explains why most of the time it looks blue or green.

M:Well, there are actually lots of factors that affect the color of water.

W:Such as … what, like how deep the water is?

M:Right. And it’s easy to see why. It’s because light from water comes from three places: the top, the middle, and the bottom of the water.

W:I’m not sure I understand.

M:Think of it like this. Together, all three parts of the water top, middle, and bottom make up the blend of light that we see. Under certain circumstances, one may dominate the others. For example, in shallow water, light from the bottom is most important. In deep water, very little light comes from below, so reflections from the surface are the brightest.

W: So, that means, in a shallow puddle, the bottom is well lit, so it sort of contributes more to the scene. I mean, it affects the overall color more than … say uh … the invisible bottom of the ocean?

M: Uh … that’s right. Because a shallow puddle is relatively transparent, the water adds virtually no blue light of its own.

M: Because the light is scattered, primarily from the suspended sediments near the surface. That’s another factor that affects the color of water sediments. Even the cleanest, purest mountain lake contains a lot of tiny particles that scatter light.

W: That’s because mountain lakes have a lot of silt from the glaciers, right?

M: That’s right. Lakes fed by glaciers get their colors from the fine, suspended silt in the water, and also from the reflected light of the sky. Glacier-fed streams are usually sort of a milky blue, and hot springs are sometimes yellow because of the sulfur suspended in the water. Some water is green and some is brown, depending on the mineral content.

W: This is really interesting. I’m glad I asked you about this.

Listen to part of a lecture in a communications class.

Throughout most of human history, a society’s culture was defined and communicated primarily through the family. Early cultures communicated their values and beliefs to their children by oral tradition word of mouth. Parents and grandparents had the job of passing on the culture’s history and traditions. The older members of the family were storytellers and historians our “cultural narrators.”

Since the 1950s, however, the role of the cultural narrator has been taken over by television. What 1 mean is, the family storytellers have been replaced by television shows that tell us who we are, what we need, how we should speak, and what we should believe in.

In the sixties and seventies, as television became more a part of North American life, several writers and philosophers began to study what was going on. One of the most creative minds to explore this issue was Marshall McLuhan.

McLuhan studied English literature in his native Canada and in England, and then taught at several universities in the United States. As a Canadian scholar teaching in the U. S., McLuhan realized that he didn’t understand his American students. He couldn’t figure out their interests and values, why they spoke and acted and lelt the way they did. So, he set out to learn more about the values of his students by studying their popular culture: the movies, television shows, music, pastimes all the things that young Americans pursued in their leisure time.

McLuhan became convinced that electronic media played a significant role and that the media were responsible for the attitudes and values of his students. In fact, he went beyond his immediate interest in his own students to theorize that the media had prompted most of the social changes in Western culture. McLuhan’s ideas soon made him the leading cultural critic and media theorist of his time.

McLuhan’s ideas gained attention worldwide. He wrote several books about the effect of media on human development, including this one. The Medium in the Message, which is the book you’ll be reading next in this course.

The Medium in the Message is McLuhan’s most influential book. Although it was first published more than thirty years ago, it remains an important classic in the field of communications. It’s a book and an idea that you’ll come back to over and over again, and reading it will probably change your view of how we communicate.

Why is it such an important book? Well, you’ve probably heard the expression, “The medium is the message” because it’s entered our vocabulary. What McLuhan meant by this statement was that how people learn the medium is more important tlian what they learn the message. In other words, the method of communicating information has more influence on the public than the information itself. Communication is culture, and culture is communication.

McLuhan didn’t consider himself a critic of the media in the sense of condemning it. He wasn’t interested in deciding whether television was good or bad. He just wanted people to understand how it affected them so they could make their own informed decisions about it. We’re just beginning to understand the ways that the media have affected our culture. Sociologists, psychologists, media ecologists people in a multitude of fields arc trying to explain the relationships among media, values, and behavior.

Is television good or bad for us? Does television cause human behavior, or merely record it? This question is of particular interest to researchers who study the effects of television especially television violence on children’s behavior. And now that television is starting to merge with other electronic media, like the Internet, there are a growing number of issues and new questions calling for informed thinking about the relationship of the media to human development.