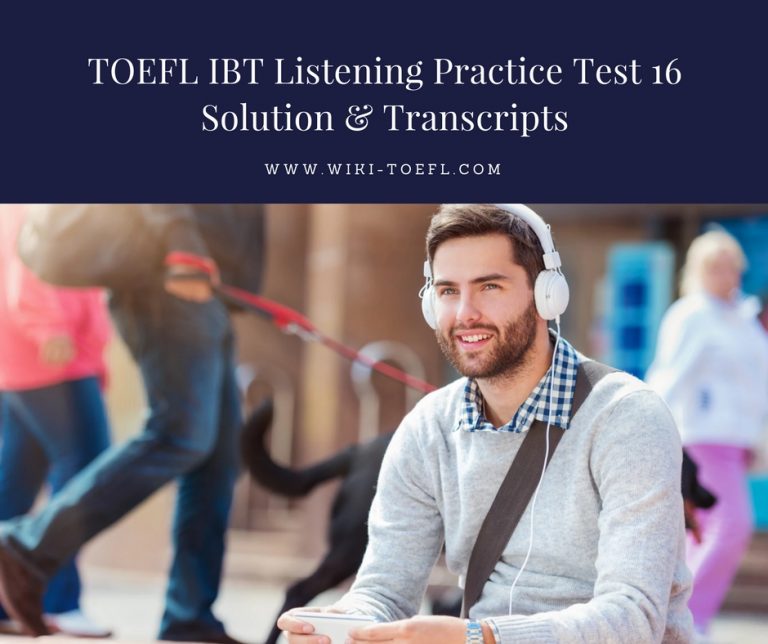 Listen to part of a lecture in a geography class.

Professor: So those are the major types of rivers in the world. Now, as you may be aware, many rivers form deltas at their mouths. Our Mississippi River forms one of the most recognizable deltas in the world. The term “delta” was coined by the Greek historian Herodotus because the shape of the delta of the Nile River in Egypt is shaped like the Greek letter delta. The Amazon River has the largest delta in the world, and the Yellow River in China has the greatest sediment flow, which is very important in delta formation. .

Sediment flow is what creates a delta. Rock is eroded by wind and water, and many of the eroded parts end up in the water system at some point and, eventually, in the great rivers of the world. As a river moves toward the ocean or a large lake, it picks up this eroded dirt and sand. When the river reaches a large body of water, the force of the river slows, and the sediment is deposited. The finer particles are carried farther from the shore, and the coarser ones are heavier and fall to the seabed first. Thus you have a gentle slope underwater, with the heavy buildup near the river mouth and gradually sloping down the further out it goes. As the delta grows outward, the different types of material form layers on top of each other. Often at the bottom of the delta there is mud, with silt on top, then fine sand, and finally coarser sand on top. It can build up for many centuries, and, if there is enough sediment, it can produce islands and cause the river to divert into many different channels.

In fact, the Mississippi has had seven different recognizable delta formations in different locations over its long history, with one even having the mouth of the river where present day New Orleans is. The current form of the Mississippi delta is approximately six hundred years old. When a river overflows, the coarser sand sediment is sometimes deposited on the river banks, which forms natural levees. A levee is like a long pile of dirt. They are often found along rivers that are prone to flooding. As I said, some are natural, and many are man-made. Flooding was one of the great dilemmas of the ancient world, especially in ancient China and Egypt. Flooding allowed rich deposits of sediment to be deposited, which enriched the soil for growing food. But flooding is also very disruptive to life  and causes massive damage and loss of life at times. The Egyptians built the Aswan Dam to control the flooding of the Nile.

The formation of a river delta depends on several factors. Chief among these are the speed of the river’s water flow and the nature of the body of water the mouth meets, particularly its tides and wave energy. Rivers with great flow, such as the Amazon, can carry the sediment farther and thus create larger deltas. Slower rivers deposit their sediment much sooner. In addition, the condition of the body of water will decide what type of delta there is. In the Gulf of Mexico where the Mississippi comes out, there is a very mild body of water with weak tides and wave forces. The speed of the Mississippi’s flow is greater than tide and wave forces, so the delta forms in long, finger-like protrusions, and the delta grows far from the coast.

In contrast, the Nile delta has a much smoother coastline because the Mediterranean waves force the deposited sands back into long smooth lines. Since the Egyptians built the massive dam to control the Nile, the amount of sediment has been considerably reduced. The delta is actually receding because of the force of the waves. The Niger River in West Africa is another such example since the Atlantic Ocean has both strong tides and waves. Other deltas do not appear to be deltas at all but are more like estuaries because the strength of the tides and waves is so strong in those areas.

Deltas are the sites of several of the world’s great oil fields, with the Niger and Mississippi rivers among the largest. These rivers have been depositing sediment for millions of years, and the sediment has settled and crushed massive amounts of plant and animal life, which has created oil and its by-products. River deltas are also homes to diverse ecosystems, with extensive marshlands, both fresh and saltwater, supporting many reptilian, amphibian, and aquatic life forms. Also, there are large numbers of birds in these deltas. Man’s intrusion into the deltas sometimes upsets this balance. The Nile delta was once a great fishing ground, but, since the dam was built, the sediments, rich with nutrients, are fewer, and the fish are also fewer.

Listen to part of a conversation between a student and an office secretary.

Secretary: May I help you? You look like you are a little lost.

Student: Yeah, I am not sure if I’m in the right place or not. I’m looking for the office that handles classroom bookings. Is this it?

Secretary: You’ve found the right place. We handle all of the university’s classroom reservations. What date and time do you need it, and why do you need it?

Student: I need to reserve a classroom for the science club. We usually meet on Friday, so I guess next Friday would be a good day.

Secretary: I’m sorry, but almost every classroom is occupied during the week. Let me check… Sorry, next Friday is booked solid. How about Saturday or maybe Monday evening?

Student: On Monday evening, most of us have a chemistry class. Besides, this Monday is too soon, and the following Monday is too late. Next Saturday should be fine, I guess, if nothing else is available during the week.

Secretary: Let me check to make sure. That’s the eighteenth I believe. Hmmm… Yes, we have two rooms. One in the morning and one in the afternoon are still free.

Student: The afternoon would be better. No one likes getting up early on Saturday.

Secretary: I know what you mean. Okay, so that will be Room 203 in the Beverage Arts Center.

Student Does it have a large screen projector that can be hooked up to a laptop?

Secretary: I don’t believe it does. The Beverage Arts Center is one of the oldest buildings on campus, and they haven’t had the time to modernize it yet. Is the large screen projector really necessary?

Student: We need it to present the different projects that our groups have been working on. It’s kind of like a contest we have every year. How about the other room, the one in the morning?

Secretary: I believe it does have a screen that can be connected to a computer. That’s Room 307 in the Patrick Lawrence Science Building.

Student: That sounds perfect. I know that room because I had one of my classes there last semester. It’s just what we are looking for. What time can we have it?

Secretary: From nine to twelve. Is that enough time?

Student: It should be. We have a lot of projects to present. I’ll just tell everyone they have a time limit.

Secretary: Okay, so I need your name and student ID to book that room.

Student: My name is Toby Ryan. Here’s my ID card.

Secretary: Thank you, Toby. Now I need to explain the rules for booking these classrooms. First, if a professor or administrator needs the room for any reason, you have to vacate it. Second, all the furniture and equipment in the classroom are your responsibility. Any damages, and you and the other members of your group are responsible for making restitution. Third, leave the room as you found it. That means put things back where they belong, and clean up any messes that are made. Do you understand these rules, Toby?

Student: No problem. I’ll make sure everything is fine.