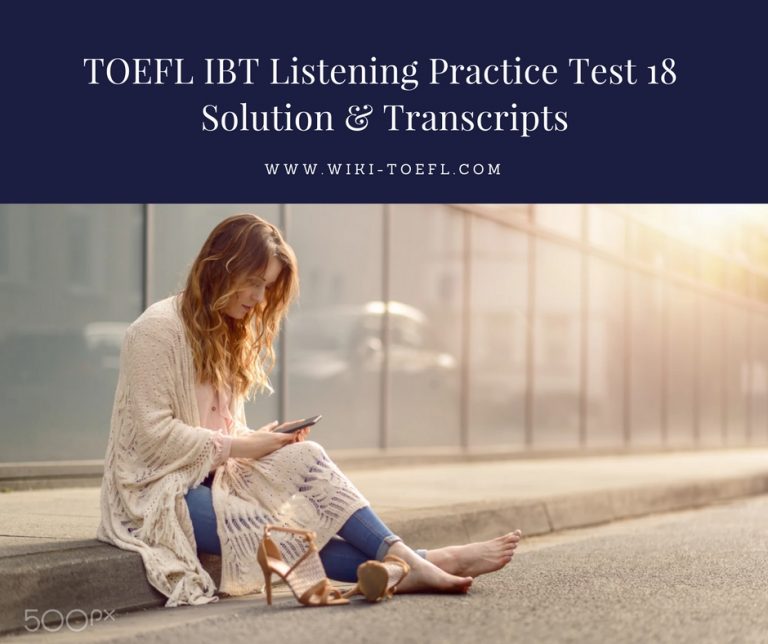 Listen to part of a lecture in an enginering class.

Professor: Yes, satellites are one-way communications that are linked together, whether it is cell phones or the Internet or television. But, are there any other methods? What I mean is… how else do we connect the continents and islands of the world? What is another factor of globalization? Well, today there are literally hundreds of cables lying across nearly every ocean floor, all of which connect us with each other. Connecting Japan with the United States or, let’s see, India with the Maldives, I mean, there are cables all over the place passing information, bank transactions, e-mail, web searches, and just about anything else that you could possibly think of. I mean, many cables even transport gas and oil between continents, not just megabytes.

But, what I’d like to talk to you about today is how exactly these cables are laid and the process behind them. It takes special ships, called cable ships, and high-tech, massive machines to lay and bury the cables under the ocean floor, and they are always out there, working, laying, and burying cable to make our world more well-connected, efficient, and reliable. So, if there aren’t any questions at this point, I’ll begin to discuss the process.

There are two main vehicles involved in laying oceanic cables, the cable ships, which I just mentioned, and the trenchers, which are complex machines that dig the trench for the cable, lay it in the correct position, and then, finally, bury it. But, before the trencher can even begin, engineers on the ship must conduct a survey of the ocean floor to plot the best route for the cable and to look out for hazards. The cable ship, then, first launches a robotic submarine to take pictures of the seafloor and to check for potential problems, such as rocks, reefs, or even sunken ships or planes, basically, anything that would obstruct the cable. The robotic submarine is crucial for the engineers on the cable ship to plot an efficient, obstacle–free path for the oceanic cable. Is everyone still with me…? Excellent.

So, once the crew is satisfied with the pathway, they lower the trencher into the water from the cable ship. The trencher is an unmanned vehicle that is maneuvered by a computer. It has a very long umbilical cord connecting it to the cable ship. The cable ship then begins to lead the cable off of the deck, and the trencher follows it to the floor of the ocean. The trencher either moves with tank-like treads on hard soil or skis when it’s on more unstable sediment. In the back of the trencher, it contains ten fan thrusters that propel it through the water. The next step for the trencher is to dig the actual trench, which it does by using water. It sucks in seawater and blasts it out of the high-pressure nozzles that are attached to its two arms, which swing on the outside of the cable itself. The jet nozzles blow away the seabed, ultimately forming a trench that is typically around six feet deep. The cable then rests comfortably in this. The consistency of the ocean floor determines what type of blast the trencher uses. If the ocean floor is sandy, it uses low, even pressure water flow, but, if it is hard, a high, intense pressure stream will carve right into it. Today’s trenchers are mega machines, class. They weigh about twenty-five tons and are powered by eight hundred horses. They can also dive to depths reaching nearly five thousand feet. Okay, now, next the trencher clears the slush with a vacuum and pumps it out of pipes on the side. This empties the trench and allows the cable to sink into the freshly dug trench.

Student: But, Professor, I’m a little confused. Why doesn’t the cable just float away? Cables are usually hollow, correct?

Professor. That’s a very astute good question. Actually, before they spool the cable off of the deck of the ship, they begin to fill it with heavy liquids so that what you mentioned doesn’t happen. So, now the cable is down in place. At this point, the cable ship crew will pull the trencher back up to the surface and outfit it with a burying apparatus. Obviously, this is to bury the cable inside the trench. Now outfitted with the backfill tool, the trencher again descends to the ocean floor and begins to bury the cable with, again, with water jets. There are two. One blasts the bottom of the trench wall as the other blasts the top of it. Eventually the trench will collapse on itself and bury the cable completely. At this point, the process is, for the most part, complete, and the cable ship will move on to repeat the process and lay another segment of cable.

Listen to part of a conversation between a student and a librarian.

Librarian: Yes, uh, who is next, please?

Student Hi, um, I have a few questions for you. I’d like to renew this stack of books if it’s possible. I believe some of them are late, but I don’t know which ones.

Librarian: Wow. That’s a monster stack. Let me begin to scan them for you to see what the damage is. Our policy is twenty-five cents a day for the first two weeks, and, after that, you have to pay for the book. You used to just have to return it and pay five dollars.

Student: Wow, that’s pretty strict, isn’t it? Some of the books are really expensive, aren’t they?

Librarian: Well, I don’t make the policy. The school does, but, to be honest, students have been keeping books out way too long over the past few months without ever returning them. Other students need those books, too, so the university made the penalties stricter in the hope that students will change their habits when it comes to checking out and returning books.

Student: Oh, I see. Well, I don’t think any of these have been out that long.

Student: Um, you know what? I don’t have any cash with me right now. Can you just charge it to my university account?

Librarian: Sure, no problem. Done. Now, you said that you wanted to renew a few of these?

Student That’s right. The two historical criticisms I’d like to keep for another week if I could.

Librarian: Okay. Let me just make sure they have not been reserved or requested by another student or professor. You see, sometimes, when a book is out, someone will reserve it because he needs it really bad for a paper or class or something. In that case, I’ll have to keep the book for that person, and then you can get it later.

Student: Oh, I understand. I’ve done that before.

Librarian: Whoops. Bad news. Both of the ones you want to renew have been requested by a professor. I’m afraid I’m going to have to hold them.

Student Oh, no. You’re kidding me. I’ve just got to have those two books. I have a huge history paper due on Monday, and those two books are critical. I mean, without them, there’s no way I can write my paper. I’m dead. I can’t believe this.

Librarian: Hang on now. All is not lost. I can check on the system to see if the junior college library has them. If they do, I can reserve them for you, and then you can run by and pick them up really quickly.

Student: Oh, that would be great. Thanks a lot.

Librarian: Yep, they’ve got both of them. I’m not surprised. Most ju-co students wouldn’t need books like those. And I’ve reserved them in your name. So just drop by, and get them around noon today.

Student Great. Thanks so much. See you!