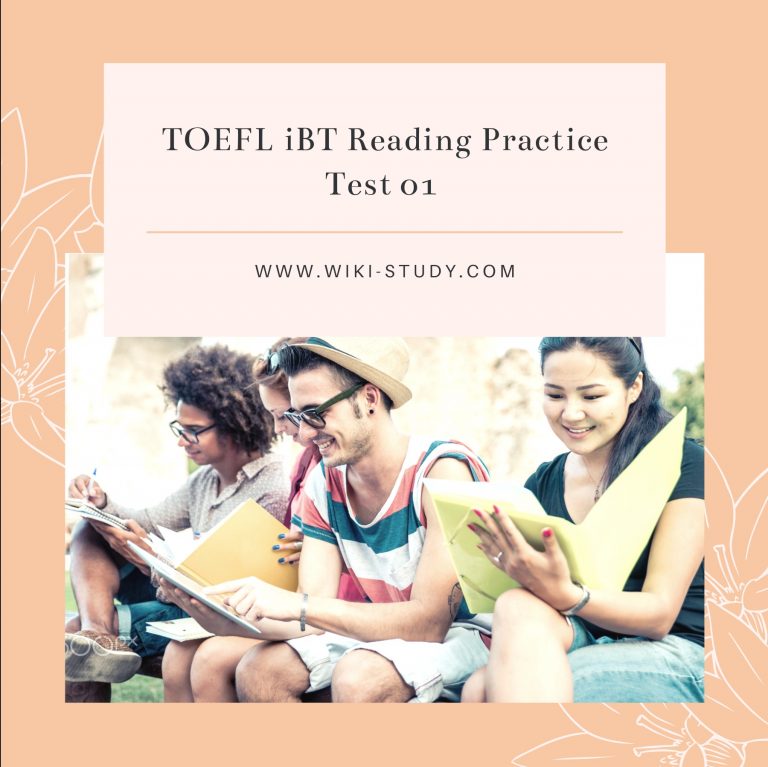 You may now begin the Reading section. In this part, you will read 1 passage. You will have 20 minutes to read the passage and answer the questions.

Energy from the Waves

The quest for sustainable sources of energy has led humans to study the energy potential of the sun and the wind, as well as the immense power created by dammed rivers. The oceans, too, represent an impressive source of potential energy. For example, it has been estimated that the oceans could provide nearly 3,000 times the energy generated by hydroelectric dams such as the Hoover Dam. Yet. this source remains quite difficult to exploit.

But this challenge has not prevented scientists from trying. Within the last few decades, several technologies that can transform the ocean’s immense forces into usable electricity have been invented and introduced. Some focus on capturing the power of the changing tides, while others rely on thermal energy created by oceans in certain tropical regions. However, the most common and easiest-to-develop technologies are those designed to harness the power inherent in the ocean’s waves.

There are several methods by which ocean-wave energy can be collected. All of them work because the movement of the water that the waves induce creates storable energy by directly or indirectly driving a power generator. In one such technology, the changing water levels in the ocean that are produced by waves lift a long floating tube comprised of many sections connected by hinges. As the sections move up and down with the water, they pump a special fluid through the tube that can be used to drive a generator. Another technique works on a similar principle, only the floating object rocks back and forth with the motion of the water instead of up and down. A third method of collecting wave energy relies on the rising water from the waves to compress air in a partially submerged chamber. As the waves rush into the chamber, they push the air out through a narrow tunnel. Located inside this tunnel is a turbine connected to a power generator. The movement of the air turns the turbine, which feeds energy into the generator.

[A] The drawback to each of these concepts is that they make it necessary to have many pieces of machinery linked together. [B] This presents a problem because the larger the device, the more vulnerable it is to damage from hazardous ocean environments, and the more likely it is to interfere with otherwise unspoiled coastal scenery. [C] Also, these methods demand the construction of site-specific machines that take into consideration average local wave heights and sea conditions. [D] In other words, the ability to get power from waves differs from region to region.

Japan, Norway, and the UK have all attempted to generate energy by capturing the power of ocean waves. In northern Scotland, the first power plant to use wave power, OSPREY (Ocean Swell Powered Renewable Energy), began operating in 1995. It followed the principle of the third method described above: waves entering a partially submerged chamber pushed air into turbines; to generate electricity. The electricity was then transmitted to power collectors on the shore via underwater cables. Unfortunately, the OSPREY plant was destroyed in a large storm, highlighting an unavoidable difficulty associated with this kind of power generation.

The potential benefits of wave-based energy are hard to ignore. Once the proper machinery is produced and installed, the energy is free. Maintenance costs are small, and the equipment does not pose any threats of environmental pollution. And best of all, the amounts of energy produced are enormous.

However, these theoretical advantages have yet to be fully realized. In many cases, a lack of government funding has inhibited the technologies from advancing. For example, despite the relative abundance of proposed wave-power devices, many have not been adequately tested, and most have been evaluated only in artificial pools where they are not subjected to the harsh marine conditions that exist in actual oceans. Protecting the equipment from the sea’s destructive forces, as well as the fundamental task of determining feasible locations for collecting energy, also present formidable challenges. All in all, while ocean power offers some intriguing possibilities, the difficulties involved in harnessing this energy source are substantial and will require more time to overcome.

1. The phrase this source in the passage refers to

2. The word exploit in the passage is closest in meaning to

3. Why does the author mention the Hoover Dam in paragraph 1?

4. In paragraph 2, the author states that

5. The word induces in the passage is closest in meaning to

6. According to paragraph 3, which of the following is true about wave-power technologies?

(A) Many of them use submerged objects to obtain the waves’ energy.
(B) Compressed air must be present for them to work properly.
(C) They undertake three steps in order to collect wave power.
(D) They rely on the water’s motion to create electricity.

7. According to paragraph 5, what part did the cables play in OSPREY’s design?

(A) They attached the partially submerged chamber to the sea floor.
(B) They generated the electricity which was then collected in turbines.
(C) They conducted the electricity from the generator to the shore.
(D) They provided stability during powerful ocean storms.

8. The word inhibited in the passage is closest in meaning to

9. The word feasible in the passage is closest in meaning to

(A) Most of the numerous wave-energy concepts that exist have been insufficiently examined, usually in situations that do not simulate real ocean conditions.
(B) Artificial testing pools can be used to evaluate wave-power technologies, but they do not provide as much data as researchers would like.
(C) Even though the ocean-based energy industry has not yet proven to be profitable, a number of devices that can capture wave power have been proposed.
(D) No testing of wave-energy collectors can lead to conclusive results because the conditions present in actual oceans are often unpredictable and hazardous.

11. What can be inferred from paragraph 7 about governments?

(A) They do not believe wave-energy devices can withstand ocean forces.
(B) Their interests often conflict with those of the energy industries.
(C) They demand much scientific research before they provide funding.
(D) Their support is often essential to the success of new endeavors.

12. All of these are problems associated with the collection of wave energy EXCEPT

(A) the difficulty of finding feasible locations

(B) the destructive power of the ocean

(C) the size of the equipment involved

(D) the constant changing of the tides

13. Look at the four squares [] that indicate where the following sentence could be added to the passage.

Such a requirement can be quite cost-prohibitive because engineers must create unique power generation mechanisms for each site.

The quest to establish a reliable source of renewable energy has led researchers to explore a variety of means of harnessing the energy of ocean waves.

(A) Tidal power and thermal energy are also examples of how the ocean can meet the growing energy needs of humankind.

(B) Several different methods of gathering wave energy have been developed, including floating generators and partially submerged air chambers with turbines.

(C) People must weigh the benefits of ocean-

(D) Many countries have already succeeded in powered generators against the negative constructing equipment that can transform effects such machinery will have on coastal waves into a limitless source of electricity, habitats.

(E) Some of the advantages offered by ocean energy include low maintenance costs, little or no environmental harm, and huge production levels.

(F) Wave-energy projects are confronted by many problems, particularly the great diversity of ocean sites and the difficulty of avoiding damage to the equipment.