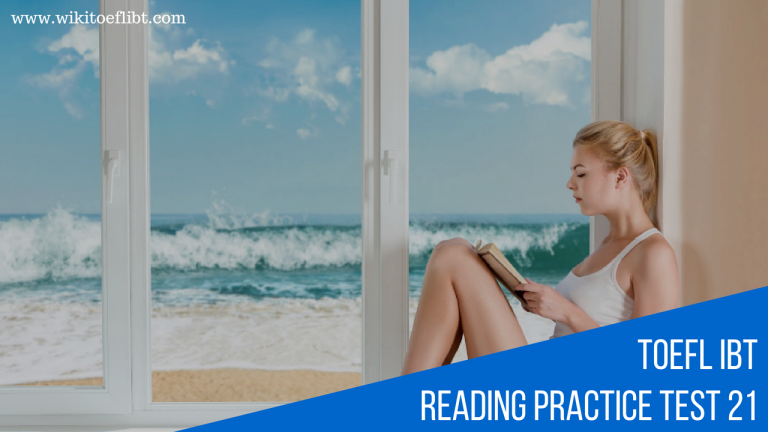 The Reading section measures your ability to read and understand passages in English. You will read three passages and answer questions about them. Answer all questions based on what is stated or implied in the passages.

Most questions are worth one point. The last question in each set is worth more than one point. For this question, the directions will indicate how many points you can receive.

Some passages have one or more words in bold type. For these bolded words, you will see a definition in a glossary at the end of the passage.

Allow 20 minutes to read each passage and answer the questions about it. You may now begin the first passage.

1 In North America, native grasslands occur primarily in the Great Plains in the middle of the continent. The North American prairie biome is one of the most extensive grasslands in the world, extending from the edge of the Rocky Mountains in the west to the deciduous forest in the east, and from northern Mexico in the south to Canada in the north. Average annual rainfall ranges from about 40 cm (16 inches) in the west to 80 cm (31 inches) in the east. Average annual temperatures range between 10 degrees and 20 degrees Celsius (50 to 68 degrees Fahrenheit). In the moist regions of the North American grasslands, especially in the northern Great Plains, rainfall is distinctly seasonal, and temperatures can vary widely from very hot in summer to bitter cold in winter.

2 One hundred years ago, the Great Plains grasslands were one vast, unbroken prairie. Much of the prairie is now farmland, the most productive agricultural region in the world, dominated by monocultures of cereal grains. Wheat, barley, soybeans, corn, and sunflowers occupy the land that was once prairie. In areas given over to grazing lands for cattle and sheep, virtually all the major native grasses have been replaced by alien species.

3 An important feature of the northern Great Plains grasslands is the presence of millions of glacial depressions that are now small ponds known as prairie potholes. They were formed during the most recent Ice Age, when streams flowed in tunnels beneath glacially formed sandy ridges. When the Ice Age ended around 12,000 years ago, the retreating glaciers created about 25 million depressions across a 300,000-square-mile landscape—about 83 potholes per square mile. As the ice blocks melted, much of the water was left behind, forming wetlands ranging in size from a tenth of an acre to several acres. The wetlands were soon surrounded by fluttering waves of grasses: shortgrass, mixed grass, and tallgrass.

4 Today these small wetlands still cover the prairies, although much of the landscape-— including both native grasses and potholes—has been transformed to cropland and grassland for grazing. What does remain of the wetlands, however, still serves as an important breeding area for more than 300 bird species, including large numbers of migrating shorebirds and waterfowl. The potholes fill up with water during spring rains and usually dry out by late summer. Every spring, birds arrive in great numbers—northern pintails, mallards, coots, and pied-billed grebes—4 to 6 million strong, to mate in the seasonal wetlands that dot portions of Minnesota, Iowa, North and South Dakota, Montana, Alberta, Saskatchewan, and Manitoba. Prairie pothole country produces half of North America’s 35 to 40 million ducks and is reowned worldwide as a “duck factory.”

5 Recently biologists have discovered that the prairie pothole region is potentially a vast carbon sink; a natural sponge that absorbs carbon dioxide emissions from cars, factories, and power plants. Carbon dioxide is the most common of all the pollutants acting as greenhouse gases that heat up the atmosphere. Fortunately, however, carbon dioxide is captured naturally and stored in trees, soil, and plants. Scientists have termed this “carbon sequestration.” They have determined that prairie potholes hold an average of 2.5 tons of carbon per acre per year when not being farmed. This means that if the entire pothole region in the United States and Canada were to stop being farmed, the region would store about 400 million tons of carbon over 10 years—the equivalent of taking almost 4 million cars off the road. Thus, preserving the potholes could be a way to offset greenhouse gas emissions that are warming the planet.

Glossary:
biome: one of the world’s major natural communities, classified by predominant vegetation

1. All of the following statements are true of the northern Great Plains EXCEPT

(B) An unbroken prairie now extends from the western mountains to the eastern forest.

(D) A large number of smalt wetlands are found throughout the region.

2. What has taken place in the Great Plains grasslands during the last century?

(A) The average annual rainfall has risen and fallen several times.
(B) Large parts of the prairie have been converted to agricultural use.
(C) Melting glaciers have formed numerous depressions in the soil,
(D) Scientists have transformed the region into one large carbon sink.

3. The word alien in paragraph 2 is closest in meaning to

4. The prairie potholes owe their origins mainly to

(A) the variation in temperature throughout the year

(C) the heavy rains that fall in the spring and summer

(D) the increase in greenhouse gases in the atmosphere

(A) The wetlands completely cover the landscape, making it difficult to grow crops and grass for grazing.
(B) The native grasses that grew in the potholes have been replaced with crops that are more beneficial.
(C) Except for the potholes region, the entire prairie has been converted to cropland and grazing land.
(D) Even though a large portion of the prairies is used for crops and grazing, the small ponds remain.

6. The word dot in paragraph 4 is closest in meaning to

7. Why does the author use the term “duck factory” in paragraph 4?

(C) To illustrate the tremendous growth of the poultry industry

8. What is the function of a carbon sink?

(A) It regulates carbon emissions from human activities.
(B) It measures the amount of carbon dioxide in the ecosystem.
(C) It collects and drains seasonal rainwater from the soil.
(D) It removes carbon dioxide naturally from the atmosphere.

9. The word this in paragraph 5 refers to

(A) the emission of carbon dioxide from cars, factories, and power plants

(B) the action of carbon dioxide as a greenhouse gas

(C) the capture and storage of carbon dioxide in trees, soil, and plants

10. What can be inferred from paragraph 5 about carbon sequestration in the prairie pothole region?

(A) It depends on the land not being disturbed by agriculture.
(B) It creates a beneficial habitat for many species of birds.
(C) It is a leading cause of the warming of the atmosphere.
(D) It exceeds the amount of carbon captured anywhere else.

11. The word offset in paragraph 5 is closest in meaning to

12. Look at the four squares, [A], [B], [C], [D] which indicate where the following sentence could be added to the passage. Where would the sentence best fit?

Today, however, the original grassland associations of plants and animals have been almost completely destroyed by human settlement.

One hundred years ago, the Great Plains grasslands were one vast, unbroken prairie. [A] Much of the prairie is now farmland, the most productive agricultural region in the world, dominated by monocultures of cereal grains. [B] Wheat, barley, soybeans, corn, and sunflowers occupy the land that was once prairie. [C] In areas given over to grazing lands for cattle and sheep, virtually all the major native grasses have been replaced by alien species. [D]

The grasslands of North America consist mainly of the prairies in the Great Plains.

A. Grasslands are found in the intermediate zone between dry desert and moist forest habitats.
B. Most of the native prairie grasses have been replaced with cereal crops and grasses for grazing.
C. Millions of glacial potholes that function as seasonal wetlands are an important feature of the region.
D. Waterfowl such as northern pintails, mallards, coots, and pied—billed grebes live in the northern Great Plains.
E. The prairie potholes have environmental value as a breeding ground for birds and as a potential carbon sink.
F. Storing 400 million tons of carbon is the equivalent of removing 4 million cars from the road.