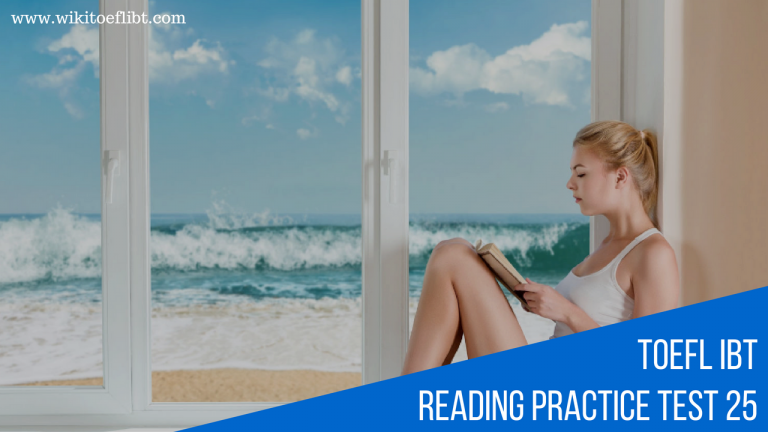 The Reading section measures your ability to read and understand passages in English. You will read three passages and answer questions about them. Answer all questions based on what is stated or implied in the passages.

Most questions are worth one point. The last question in each set is worth more than one point. For this question, the directions will indicate how many points you can receive.

Some passages have one or more words in bold type. For these bolded words, you will see a definition in a glossary at the end of the passage.

Allow 20 minutes to read each passage and answer the questions about it. You may now begin the first passage.

1 Population ecology is the science that measures changes in population size and composition and identifies the causes of these fluctuations. Population ecology is not concerned solely with the human population. In ecological terms, a population consists of the individuals of one species that simultaneously occupy the same general area, rely
on the same resources, and are affected by similar environmental factors. The characteristics of a population are shaped by its size and by the interactions among individuals and between individuals and their environment.

2 Population size is a balance between factors that increase numbers and factors that decrease numbers. Some factors that increase populations are favorable light and temperature, adequate food supply, suitable habitat, ability to compete for resources, and ability to adapt to environmental change. Factors that decrease populations are insufficient or excessive light and temperature, inadequate food supply, unsuitable or destroyed habitat, too many competitors for resources, and inability to adapt to environmental change.

4 Another important population characteristic, dispersion, is the pattern of spacing among individuals within the population’s geographical boundaries. Various species are distributed in their habitats in different ways to take better advantage of food supplies and shelter, and to avoid predators or find prey. Within a population’s rangs, densities may vary greatly because not all areas provide equally suitable habitat, and also because individuals space themselves in relation to other member of population.

5 Three possible patterns of dispersion are clumped, uniform, and random. A clumped dispersion pattern means that individuals are gathered in patches throughout their habitat. Clumping often results from the irregular distribution of resources needed for survival and reproduction. For example, fallen trees keep the forest floor moist, and many forest insects are clumped under logs where the humidity is to their liking. Clumping may also be associated with mating, safety, or other social behavior. Crane flies, for example, swarm in great numbers, a behavior that increases mating chances, and some fish swim in large schools so they are less likely to be eaten by predators.

6 A uniform or evenly spaccd distribution results from direct interactions among individuals in the population. For example, regular spacing of plants may result from shading and competition for water. In animal populations, uniform distribution is usually caused by competition for some resource or by social interactions that set nn individual territories for feeding, breeding, or resting.

7 Random spacing occurs in the absence of strong attraction or repulsion among individuals in a population. Overall, random patterns are rare in nature, with most populations showing a tendency toward either clumped or uniform distribution.

8 Populations change in size, structure, and distribution as they respond to changes in environmental conditions. Four main variables—births, deaths, immigration, and emigration— determine the rate of change in the size of the population over time. A change in the birth rate or death rate is the major way that most populations respond to changes in resource availability. Members of some animal species can avoid or reduce the effects of environmental stress by emigrating from one area and immigrating to another with more favorable environmental conditions, thus altering the population’s dispersion.

2. According to the passage, which factor might cause the population of a species to decrease in size?

(A) A favorable amount of light and water

(B) An ability to hide from or defend against predators

(C) A large number of other species competing for food

(D) A greater number of births than deaths

3. Which of the following is an indirect indicator of a population’s density?

(T)AThe distribution of food in a given area

(B) The number of nests in a given area

(C) The number of births in a given period of time

(D) The number of individuals counted in a given area

4. The distribution pattern of individuals within a population’s geographical boundaries is known as

5. The word range in paragraph 4 is closest in meaning to

6. The word patches in paragraph 5 is closest in meaning to

7. The word their in paragraph 5 refers to

8. All of the following are given as reasons for clumping EXCEPT

9. The phrase set up in paragraph 6 is closest in meaning to

10. Which of the following situations would be most likely to result in a uniform dispersion pattern?

(A) Birds compete for a place to build their nests.

(B) Fish swim in large schools to avoid predators.

(D) Elephants form a circle to protect their young.

11. Why does the author mention immigration and emigration in paragraph 8?

B. To give examples of territorial behavior in animals

C. To show that populations balance themselves over time

D. To explain why animal populations are uniformly dispersed

12. Look at the four squares, [A], [B], [C], and [D], which indicate where the following sentence could be added to the passage. Where would the sentence best fit?

For example, they might estimate the number of black bears in a national park by counting individuals in a few sample plots representative of the whole park.

Population ecology is the science of populations and the factors that influence them.

A. A population is affected by its size, density, and dispersion, as well as the relationships among its members.
B. Dispersion of individuals in a population may be clumped, uniform, or random, as determined by environmental and social factors.
C. Clumping is related to safety; for example, fish swim in large schools to reduce their chances of being eaten by predators.
D. Most populations have either clumped or uniform distribution because random spacing is rare in nature.
E. Populations change in density and dispersion as they respond to changes in environmental conditions and resource availability.
F. If a population has an abundant food supply and a suitable habitat, it will not undergo evolutionary change.