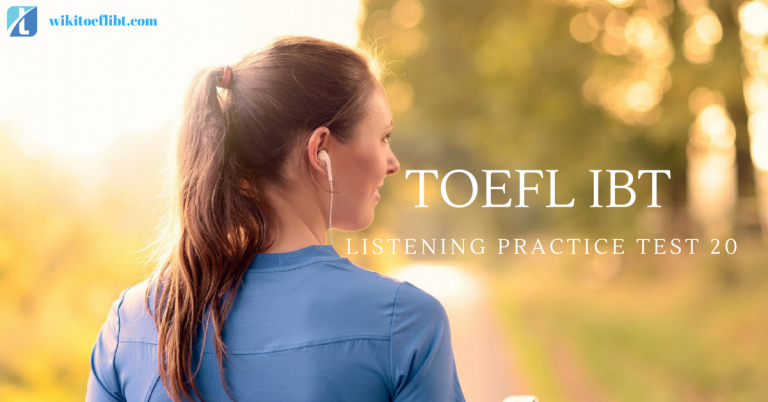 Now get ready to answer the questions. You may use your notes to help you answer.
1. What is the lecture mainly about? Track 2
(A) Status signals among gorillas and humans
(B) Social injustices caused by status signals
(C) Categories of status signals
(D) Controlling one’s own status signals

Listen again to part of the lecture. Then answer the question. Trade 3
2. Why does the professor tell the students that she will tell them more about the accident later?
(A) She recognizes she must give the students a full excuse for her late arrival.
(B) She does not think the students are interested in hearing the details.
(C) She realizes she can use the accident to illustrate a point in her lecture.
(D) She is actually more upset by the accident than she at first thought.

3. According to the professor, what is one problem with constant status signs? Track 4
(A) They are used to identify a person’s status.
(B) Playwrights have often given them to their characters.
(C) They encourage inequality with no regard for an individual’s merits.
(D) They may be respected in one society but scorned in another.

5. In the lecture, the professor describes characteristics of constant and controllable status signals Indicate to which category each of the following belongs. Track 6
Put an X in the correct column for each phrase.

Listening 2
Listen to part of a conversation between a student and her professor. Track 8

Now get ready to answer the questions. You may use your notes to help you answer.
7. Why does the student go to see her professor? Track 9
(A) To let the professor know she finds the online site very informative
(B) To ask if the professor’s website is working properly
(C) To request help with her computer
(D) To see why she’s the only one having trouble understanding the course

8. What problem is the student having? Track 10
(A) She can’t access the material on the website.
(B) She is having trouble with the class.
(C) The website seems to respond slowly to her input.
(D) When she talks, she hears her words shortly after she says them.

9. The student assures the professor that she uses anti-virus software. Why does the professor still think the problem is with the student’s computer? Track 11
(A) He doesn’t think she is using the software correctly
(B) The problem he was having with the website has been fixed.
(C) Her trouble could be caused by something other than a virus.
(D) She’s been having difficulty with the website all along.

11. What does the professor think about the computer help desk? Track 13
(A) Its staff are professional and helpful.
(B) Its staff run an ethical business.
(C) Its staff often cause delays to computer systems.
(D) Its staff create a lot of nuisance programs.

12. What will the student probably do next? Track M
(A) Go to the store to buy an anti-spyware program for her computer
(B) Get a second opinion from another professor
(C) Check with her classmates to see if any of them are having problems
(D) Have her computer checked for adware and spyware problems

Now get ready to answer the questions. You may use your notes to help you answer.
13. What is the talk mainly about? Track 16
(A) Modern capitalist economies
(B) Attitudes of the Democrats and Republicans toward economic policy
(C) Factors in economic policymaking
(D) The impact of the federal government on economic policy

14. What are the three categories of factors that play a role in making economic policy? Track 17
(A) Political groups, interest groups, and economic groups
(B) Political, governmental, and structural
(C) Federal, judicial, and economic
(D) Structural, federal, and capital

Listen again to part of the talk. Then answer the question. Track 20
17. What can be inferred from the professor’s comment?
(A) Several students in his class don’t believe democracy influences the economy.
(B) His students did not mention the influence of democracy on the economy.
(C) In a democracy, students can say anything they want about the economy.
(D) Democracy will influence the economy only if students are willing to participate.

Now get ready to answer the questions. You may use your notes to help you answer.
1. What is the lecture mainly about? Track 23
(A) The differences between prosinnians and simians
(B) How humans and apes differ from other primates
(C) The characteristics of primates
(D) Why humans are classified as Homo sapiens

2. Why does the professor name only three of the six groups of primates? Track 24
(A) Because only three groups are found in the New World
(B) Because prosimian groups are not important for this talk
(C) Because the groups have many overlapping features
(D) Because the three other groups were discussed in a previous lecture

Listen again to part of the lecture. Then answer the question. Track 25
3. The professor’s question implies that she
(A) recognizes that humans often make bad decisions
(B) considers Linnaeus wrong
(C) believes Latin is a difficult language
(D) thinks the name is unfair to women

4. indicate whether the attributes below are characteristic of all primates, according to the lecture Track 26
Put an X in the correct column for each phrase.
Yes                No
(A) opposable thumbs
(B) keen sense of smell
(C) long period of socialization of young
(D) sensitive digits

5. Why does the professor mention the eyes of dogs? Track 27
(A) To help students imagine the size of an ape’s eye
(B) To help explain the concept of depth perception <C) To contrast animal eyes with human eyes
(D) To show why dogs rely strongly on their sense of smell

6. What differentiates apes and humans from other primates? Track 28 {A) Eyes that look forward
(B) Five digits on the end of each limb
(C) Lack of a tail
<D) Equal time spent in trees and on the ground

Listening 5
Listen to part of a conversation between a student and a university administrator. Trade 29

Now get ready to answer the questions. You may use your notes to help you answer.
7. Why does the student go to see the Director of Food Services? Track 30
(A) She wants to schedule an appointment with the Director. .
(B) She wants to know how to get on the Food Services Advisory Board.
(C) She wants to see if the dining halls can offer some different types of food.
(D) She needs to have the kitchen fix her special meals.

8. Why does the Director mention how many students attend the university? Track 31
(A) To emphasize how difficult it would be for the chef to prepare something different for each student
(B) To give the student an idea of how many people must approve changes in the menu
(C) To imply that he can’t spend too much time talking with the student
(D) To warn her that she might not be able to get on the Food Sen/ices Advisory Board

9. According to the conversation, which steps are most likely to lead to the addition of vegan food to the menus? Choose 2 answers. Track 32
(A) The student names more vegan students on campus.
(B) The student convinces the Director of Food Services to allow vegan food.
(C) The student makes a formal request to the Food Services Advisory Board.
(D) The chef receives practical suggestions about vegan recipes.

Listen again to part of the conversation. Then answer the question. Track 35
12. What does the woman imply when she says this: ?
(A) She is afraid of eating food that comes from animals.
(B) She is angry that the school does not serve vegetable-only meals.
(C) She is happy that the school will start serving vegan meals.
(D) She is relieved that the Director respected her request.

Listening 6
Listen to part of a lecture in a psychology class. Track 36

Now get ready to answer the questions. You may use your notes to help you answer.
13. What aspect of déjà vu does the professor mainly discuss? Track 37
{A) Theories of what causes it
(B) How it can be faked
(C) A description of the phenomenon
(D) Recent discoveries about how it works

Listen again to part of the lecture. Then answer the question. Track 39
15. What does the professor imply when she says this: Ç ?
(A) She is pleased the sweater added to her déjà vu illustration.
(B) She is confused by the reaction of the class.
(C) She is disappointed that the students reached the conclusion so quickly.
(D) She is surprised by how accurately she could use déjà vu to predict the future.

17. Why does the professor mention the brain functioning like a filing cabinet? Track 41
(A) To contrast an older model of how memory works with a newer model
(B) To illustrate how scientist now believe memory works .
(C) To explain to students one way that people can avoid experiencing déjà vu
(D) To help students understand the déjà vu experience in concrete terms

Listen again to part of the lecture. Then answer the question. Track 42
18. What does the professor mean when she says this: ?
(A) She expects déjà vu to be explained soon.
(B) She does not think déjà vu will ever be explained.
(C) She thinks a concrete explanation might someday be found.
(D) She does not believe concrete can be explained.