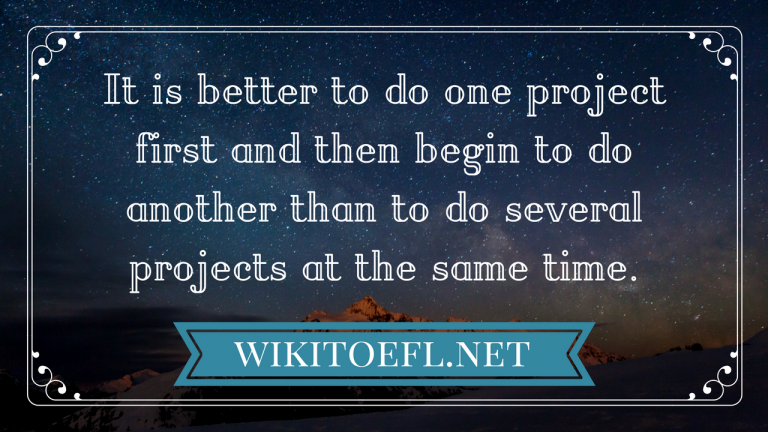 It is better to do one project first and then begin to do another than to do several projects at the same time.

Some people prefer working on several projects at once while others like to do their projects one by one. I strongly believe that it is much better to do only one project at a time rather than several at once.

When you work on any projects, it is very important to concentrate on them. This concentration can hardly be ensured when you do several projects at the same time. But doing just one thing will let you focus ail your brainpower on that single task. This will ultimately make your project much better. For example, I had two assignments due on the same day last week, instead of doing them together, I researched one project for two days and wrote the first paper. Then I did the same for the next paper. While working on each paper, I did not think about the other one. I got A’s on both assignments since I focused on them separately.

Doing one project at a time will keep you from confusing two or more assignments. A person working on multiple projects simultaneously has a greater probability of making mistakes. On the same assignments I mentioned above, my best friend worked on them both at the same time. Unfortunately, he confused them both. One was supposed to be an opinion essay while the other was a science report. He, however, made his essay a factual report and gave his opinion on the science project. He did not do his assignments properly. He got C’s on both projects. He will probably
never work on two projects at once again.

Working on one project at a time is the ideal way to get work done. It lets a person focus on his or her task while also keeping the person from confusing several different assignments. Concentration and precision will make any project successful.