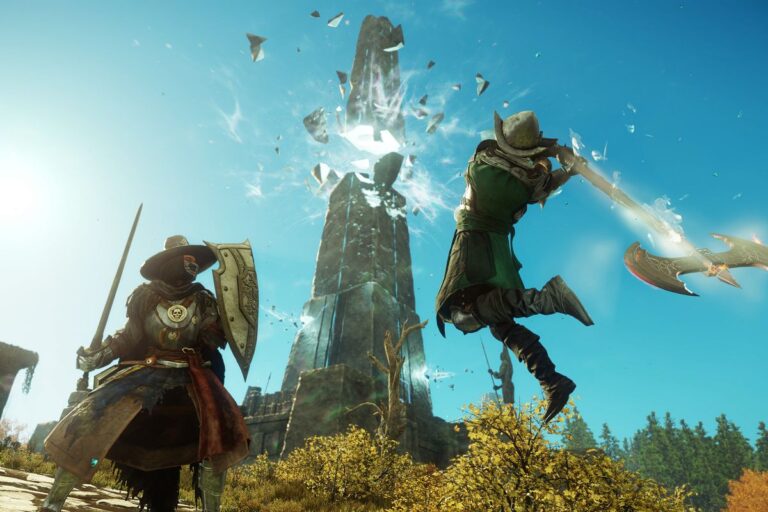 If you just started enjoying the concept of MMORPGs, you should know that “New World” – created by Amazon – is one of the simplest, yet incredibly interesting and fun games that you could try. Besides allowing you to easily dive into this video game genre, it’s also one of the best games to play at the moment, mostly because it’s beginner-friendly.

Although it’s easy to understand what you need to do to level up, you might want to do it faster, which is probably the main reason why you opted for reading our article. To make things easier – and quicker – for you, here is a list of 6 tips that’ll help you boost your New World gaming skills faster:

1. Finish The Main Objectives – But Don’t Neglect Other Ones

Like any other game out there, there is a wide range of XP sources, and although it might be tempting for you to stray and take on some side quests, you should keep up with the main objectives first. Why should you do this? Well, besides allowing you to gain substantial amounts of experience, you’ll be capable of learning more about the areas and locations of the game, all of which will help you improve your skills.

Keep in mind, you could, of course, finish some side quests that are available – such as the faction quests – however, if you truly want to improve your skills quicker, you should stick to the main objectives. After all, they won’t only allow you to improve your skills, but you can also gain a lot of beneficial and essential loot, including the Azoth Staff, which you’ll need for unlocking other things such as expeditions.

2. The Lore Pages Shouldn’t Be Neglected

When you start your journey across Aeternum, you’ll quickly notice various lore pages. In fact, they’ll most likely appear wherever you go and since they’re hard to miss because of the blue light they emit, you should always interact with them. Why? Well, though it’s true that you shouldn’t stray from the map just so you could find them, they’ll provide you with some XP, and over time, it’ll add up, causing you to improve your gaming skills and lvl up quicker.

3. Choose The Territory And Boosts Carefully

As you probably know, the in-game map is broken into several categorize, all of which are ruled by different settlements like the Windward. As you find and complete different quests in these areas, you’ll be capable of improving your relationship with the factions. Thus, whenever you level up, you’ll be able to choose a few perks that you can activate in the territory, and if the XP boost appears, make sure that you choose it, mostly because it’ll give you an XP bonus for all the activities you have in a specific area.

But, besides these boosts, there are other ones that you could opt for using as well. For instance, by choosing to purchase a boost from organizations such as lfc-nwboost.com, you won’t only be able to lvl up quicker, but you’ll also be able to gain gearing up to 525 GS and some new game packs that you might enjoy, thus, you might want to do some digging and see what you could gain from such in-game boosts.

Though you’ll get a lot of faction missions every day, completing the first three will give you an amazing XP bonus, which is exactly why you should complete them before you head up to explore. You can check the bonus allowance (located at the top of the board) when you choose and complete specific quests. Not completing these quests won’t hinder you from proceeding, but you won’t level up as quickly as you would if you complete the faction missions.

5. Deal With Enemies Other People Are Fighting

Once you play the game for some time, you’ll see that some quests will require you to slay a specific number of animals such as wolves, however, finding them might prove to be a little bit more daunting than you thought. After all, so many gamers will be after these animals, which is exactly why it’ll be daunting for you to locate them. So, what can you do to complete these quests and gain more experience points?

Well, just because another individual hit a rival first, this doesn’t mean that you cannot finish them off! By choosing to do this, you won’t only get weapon experience points, but you’ll also be capable of gaining XP for your character. Again, it won’t be as much as you would gain by doing something else in the game, however, over time, doing this simple task will add up, thus resulting in your improving your New World skills.

6. Fast Travel Points Are There For a Reason

Once you explore each territory in the game, you’ll find several fast-travel shrines in each of them, relatively close to the main settlements. Trust me, if there is one thing that you should take away from this article, it’s the fact that you should use these shrines, mostly because it’ll cut down your travel time. Of course, you can skip using them if you have to locate some animals to slay, nonetheless, they’ll be extremely beneficial for you.

Now, you should know, you’ll see some question marks on the map provided in the game, and all of them refer to a point of interest, thus if you’re completing a quest near them, you should check the question mark, especially since it might be a shrine that you can use for traveling back and forth between settlements. Also, if you want to cut down on the expenses you’ll have for fast traveling, you can empty your bags before heading to a shrine.

Whether it’s your first time playing an MMORPG or if you simply want to proceed quicker in the game, the tips we’ve mentioned above will make everything easier for you. Keep in mind, you’ll need some time to lvl up your character, hence, if you don’t see any advancements quickly, don’t worry, you just need a bit more time.

Since you’re now well aware of all the things you can do to improve your New World gaming skills, you shouldn’t lose time. Instead, you might want to load the game and while keeping all of our advice in mind, start improving your gaming skills – that’ll also help you play other MMORPG games available on the market.