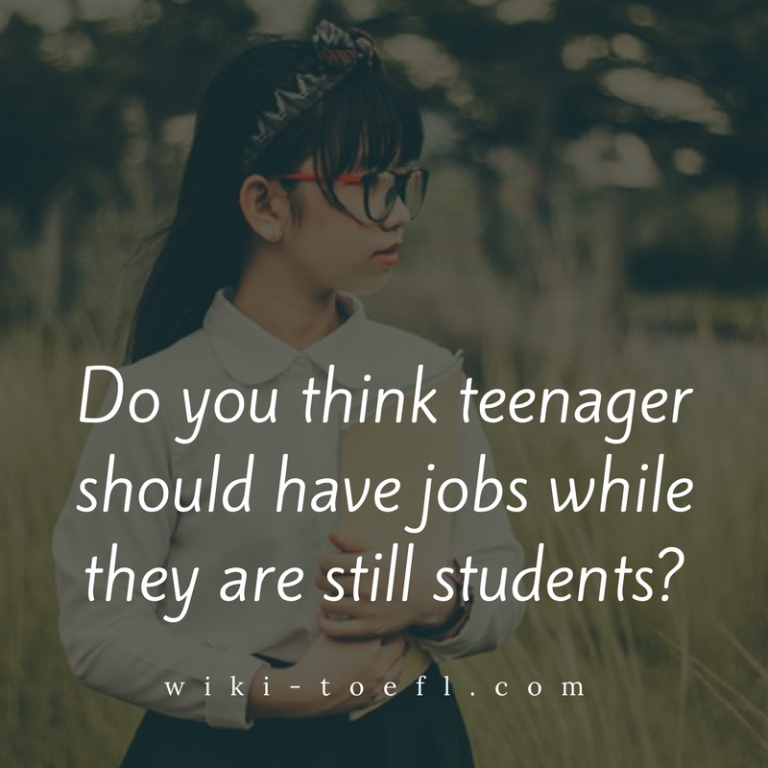 In some countries, teenager have jobs while they are still students. Do you think this is a good idea?

I don’t think it is a good ideas for teenagers to have jobs while they are still students. It can interfere with their studies, It can disrupt their home life, and it takes away part of their childhood that their can never replace.

Education today is very complex and difficult .In order to learn and get good grades, a student must work very hard and concentrate, This means attending classes from early in the morning until late afternoon, then doing research for projects, then going home and doing homework. It’s a busy schedule for everyone. For someone trying to hold down a job, it’s even harder. Students need all their energy for their studies. If they’re working after class at night, they’re going to be tired the next day. They won’t be able to concentrate. This will have a negative impact on their learning, and eventually on their grades.

Having a job can also disrupt a teenager’s home life. Families spend less and less time together. If a teenager has a job to go to after school, he won’t be home for dinner. He won’t be home after dinner either, and may not get home until late at night, This means he doesn’t have a lot of time to spend with his family .If he doesn’t have a car, it can mean changes in his parents’ schedule ,too. They have to drive him to work and pick him up.

The main drawback of a teenager having a job while he’s still a student is that he’s missing out on the fun of being young. He has a whole lifetime in which he’ll have to earn a living. This is the last free time he’ll have, It’s the last chance he’ll have to hang out with friends and just enjoy himself. Soon enough he’ll have to worry about paying the rent and buying food.

Jobs bring money, but money isn’t everything. A teenager with a job gives us too much. No one should spend all his time at working, and especially not a teenager.