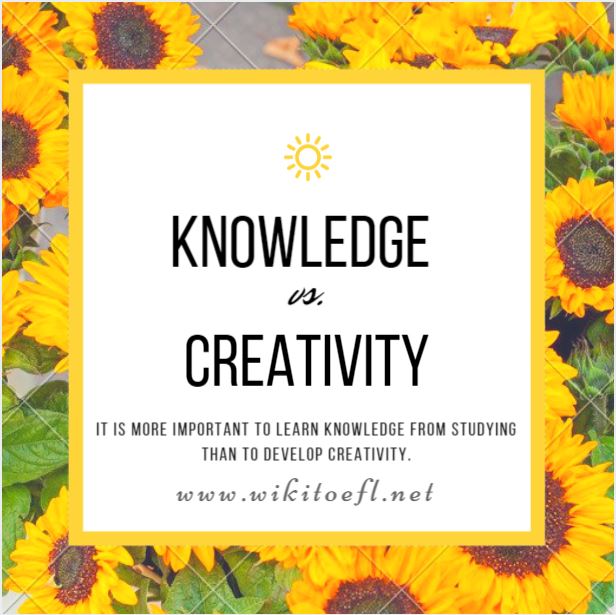 It is more important to learn knowledge from studying than to develop creativity.

My teachers are always encouraging the students to memorize lots of different facts. However, I feel this is the wrong approach to education. Instead, it is more important to develop students’ creativity than to learn knowledge from studying.

For one thing, creative people are often more successful. It does not take intelligence to do well in life. In fact, many of the most successful people were the most creative. One example is Henry Ford. He did not invent the assembly line. Instead, he used his creativity to adapt it to make cars on it. That made his company incredibly profitable. Additionally, there are many artists and other individuals who lack “book learning.” Instead, they have huge amounts of creativity. These people range from Pablo Picasso to Steven Spielberg, but they all have two things in common: They were highly creative and highly successful.

Additionally, creative people can dramatically change the world. This is possible because they think “outside the box.” They are open to new ways of seeing the world and are willing to explore them. Bill Gates is one such example. He never graduated from college. Instead, he quit school to help form Microsoft. His creativity made Microsoft a world leader in computer technology, and now the great majority of people in the world use its software products on their computers. Steve Jobs of Apple is another success story through creativity. He too never graduated from college. Thanks to his creative mind, however, he has led Apple to success after success. Thanks to Jobs, people listen
to music on their iPods and call their friends on their iPhones today. Creative people like Bill Gates and Steve Jobs have improved the world by introducing new ideas and products.

Therefore, developing creativity is more important than learning knowledge from studying. Creative people usually have more success and can also change the world in a positive way. I would much rather be creative than have lots of book knowledge.