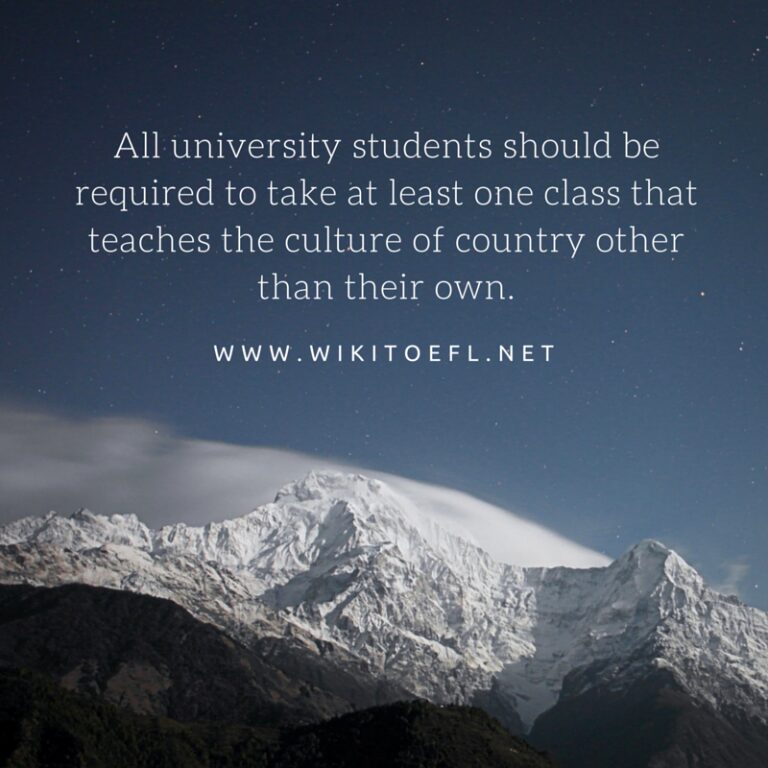 All university students should be required to take at least one class that teaches the culture of country other than their own.

Some students say they can see no reason why they have to learn about the cultures of other countries. I believe, however, all university students should take at least one class on a foreign culture, and there are some important reasons for this.

First, as the world becomes globalized, more people are traveling abroad. They are encountering people unknown to them. Travelers therefore ought to know about the countries they visit. They should know enough of a country’s language to ask simple questions. They should also be sure to understand the cultures of the countries they visit since certain actions that are polite in one place may be rude in another. For example, many Asians take off their shoes indoors, but Westerners do not. If a Westerner goes somewhere in Korea or Japan but does not remove his or her shoes, this could upset the host. Also, it is taboo to touch or pat someone’s head in Thailand because the head is considered the most sacred part of the body. Learning about foreign cultures, however, would help prevent these kinds of mistakes.

Many people are also getting jobs in other countries after they graduate. Therefore, schools owe it to their students to prepare them for the future. My cousin moved to Australia to work after he graduated from college. But he knew nothing about Australia or Australian culture, so he had many problems getting adjusted there. If he had taken some courses in college, perhaps he would have been more prepared to live and work in another culture.