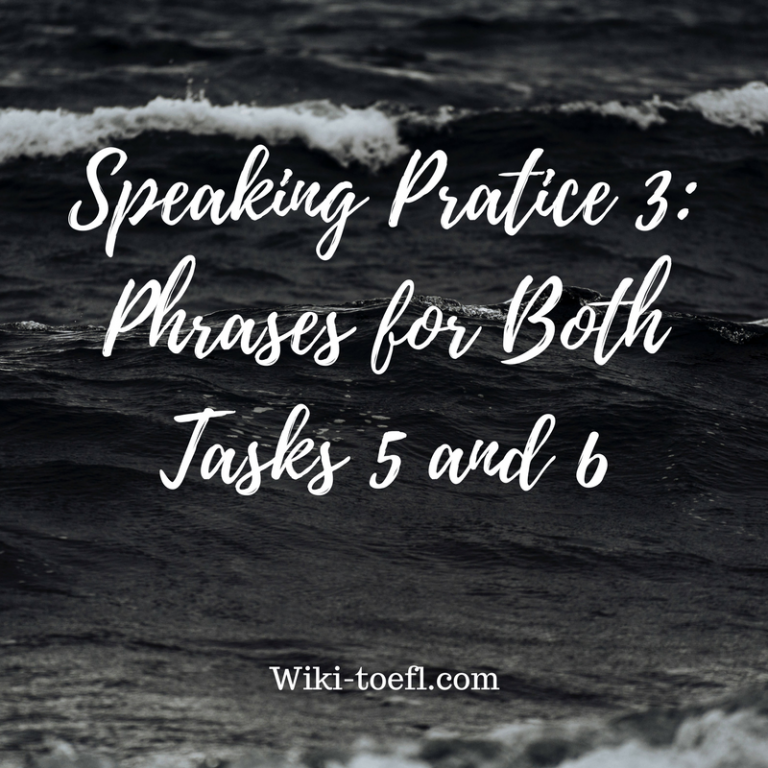 Speaking Pratice 3: Phrases for Both Tasks 5 and 6

Sample Question: Briefly summarize the problem the speakers are discussing. Then state which of the two solutions from the conversation you would recommend. Explain the reasons for your recommendation.

The issue is that the woman has two different plans for Thursday evening, and she’s not sure which she should do. First, her friend’s gonna go to Spain, and she wants to be at the going-away party. According to the woman, she won’t see her friend for a long time after that. But at the same time, uhh. she’s afraid that there will be many people at the party, so she—she won’t be able to see her friend. The second plan is to study for her history test. it’s the next day. However, she points out that she already has a high grade, so she doesn’t need to ace the test. If you ask me, I’d say that she should study for the test. After all, she can explain to her friend and say good bye separately, not at the party.

Well, ummm.. the problem the students discuss is pretty simple. The woman is choosing between going to a party, uh……. her friend’s goodbye party, or studying for a history quiz. On the one hand, she wants to say goodbye to her friend. but the man points out that many people will be at the party, not just the Spanish friend. And on the other hand, she feels that a good student would study. But still, she already has good marks in the class, and she thinks that she might insult her friend by not going to the party. Personally, I think it’s better to go to the party. The reason I say that is that a bad quiz grade, like. it won’t have a big effect on the student’s total grade, but meanwhile, she only has one opportunity to go to the party.

Using points and examples from the lecture explain the difference between inbound and outbound marketing.

At the start, the professor defines uhh.. he calls them “inbound” and “outbound” marketing. Both types are ways that businesses get new customers. But whereas outbound marketing includes things like advertisements, inbound marketing includes umm. like, articles and information. That is, inbound marketing is material for people to find, y’know, when they want help. The professor illustrates the difference with a website, uhh, a site that sells shoes. He gives the example of a billboard advertisement as outbound marketing. It, uhh, the customer does not try to find it, and maybe they don’t want it. Then the professor explains how the same company could.. they could rate different brands of shoes on their site, and people might search for those ratings and find the site. The big idea is that both inbound and outbound marketing bring people to the website, but inbound customers are, uhhh. they’re being helped by the marketing.

The professor first. he gives a brief explanation of “inbound” and “outbound” marketing. The latter is, umm, it’s traditional marketing. He elaborates with a specific example, a shoe website that buys some advertising. Maybe customers will see the ads, and then they’ll go to the website. As the professor says, in the same way, inbound marketing has the goal of bringing customers to the website. But at the same time, it has some differences, because the advertisement didn’t help the customer. umm. they didn’t try to find the ad. On the other hand, inbound marketing could help the customer. In the lecture, we heard the example of that same shoe company, uhhh, writing articles rating different shoes. So if somebody is researching shoes, they might find the articles and go to the shoe company’s website. In both cases, customers go to the website, but the professor says that inbound marketing is based more on the customer’s needs.