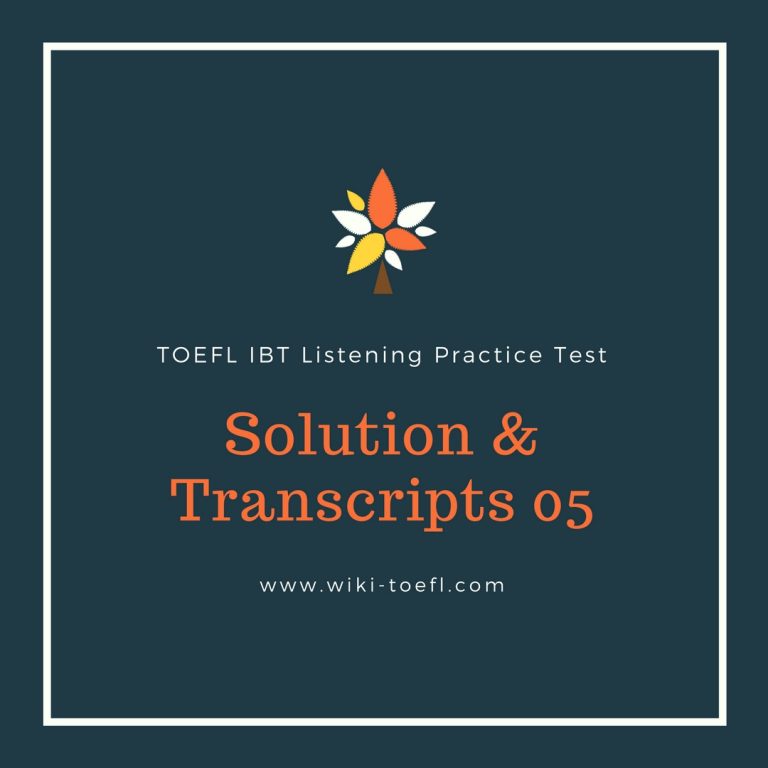 Narrator: Listen to part of a conversation between a student and a professor.

Student: Professor Collins. I’m really sorry. I mean … These are my daughters. They’re twins. I wouldn’t ordinarily bring them to an appointment, but the babysitter didn’t show up. and I couldn’t leave them. I didn’t want to cancel. I hope it’s okay.

Professor: It’s okay. I have three kids of my own, and I’ve been in the same situation.

Student: Thanks. Well, this shouldn’t take much of your time. I really just have one question.

Professor: That’s right. But you need to distinguish between them.

Professor: Okay, well, declarative memory is a memory that links us to a fact. Like a name or a date or even an experience.

Student: So when I remember a professor’s name when I see him, that’s declarative memory?

Professor: Yes, at its most basic level, it is. But declarative memory also includes problem solving. Like today, when you decided to bring your daughters to my office, you were using declarative memory to access previous experiences and facts that would allow you to make a decision.

Student: Oh, right. I remember your example in class. That makes sense now. You were talking about problem solving by recalling experiences. But wasn’t that episodic memory?

Student:… which is also a subcategory of declarative memory?

Student: Okay. Then procedural memory doesn’t include facts or experiences.

Professor: Not directly, no. Procedural memory refers to skills that we’ve learned and are now remembering in order to … to perform the skill without really thinking much about it Like, for example, riding a bike or… or do you play a musical instrument?

Student: Piano, sort of. Not really.

Professor: Okay. Well, when you ride a bike then, you aren’t thinking about the name of every part of the bike and how to use the handle bars or the pedals .. or at least not consciously.

Professor: But at some level, you are remembering how to do these things, so you are using your memory.

Student: And that would be procedural memory.

Professor: Yes, it would.

Student: Okay, then. That’s why you said that declarative memory can be more rapidly learned, but it can also be more rapidly forgotten – because a fact can come and go in the memory. But procedural memory takes repetition and practice, so it’s harder to unlearn I’m not saying that very well.

Student: That’s what I mean But…

Student: Well, I was thinking about language. When my girts were learning to talk …

Professor: Oh, I see where you are going. You want to know whether language learning is declarative or procedural.

Professor: What do you think?

Student: I was thinking that maybe it’s both? Because you have to memorize vocabulary, but eventually, it’s more like a skill like riding a bike … because you don’t think about each individual word. It’s more… more automatic. Um. Do you see what I mean?

Professor: A very good analysis. I think you’ve got this.

Student: Okay. Well, thanks a lot.

Professor: And, uh, if you ever need to ask me a question and if s… hard to get in to see me, just drop me an e-mail.

Student: I thought about that, but…

Professor: Look, I’m always glad to see you, but I answer a lot of questions like this by e-mail every day and if it’s easier for you, that’s fine with me.

Student: That’s very kind of you. Thank you so much.

Narrator Listen to part of a discussion in a literature class.

Today we’re continuing our discussion of Gulliver’s Travels by Jonathan Swift We left off last session at the point where Gulliver began his fourth voyage as the captain of a merchant ship. As you’ll recall, his crew had confined him and cast him ashore on an island. While making his way along a road, he was attacked by a herd of deformed beasts with brown skin and no tails, but suddenly the attack was interrupted by the appearance of a beautiful horse. And this is where we left off. So what happens next?

And what is Gulliver thinking about while he’s observing the Yahoos and the Houyhnhnms?

Oh, this was good. He starts to understand that the only difference between himself and the Yahoos is his clothing. But he’s… he’s horrified by this, so we see him trying to be more like the horses.

Professor: How do you know that he’s striving to emulate the Houyhnhnms?

Student 2: Well, he learns their language… so he can communicate with them.

Right. So this brings us to the most important part of the narrative—the comparison between the Yahoos and the Houyhnhnms. First tell us how the Yahoos are portrayed. What do they eat? How do they look?

Well, I think the author used the word depraved several times. They eat dog and donkey meat and even garbage, and they drink, um, they drink… too much. And he says they’re filthy, and they stink.

So their behavior… the Yahoos’ behavior… is neither rational nor moral. Now take a look at the description of the Yahoos that Gulliver has known in England. Let me refer to the book here. Okay, Gulliver explains that Yahoos in England fight wars for religious reasons, that lawyers use reason to argue for the wrong side, that the wealthy live to acquire more luxuries, and that greed makes them ill. By this, we assume that he’s referring to the rich gourmet diet that causes gout and other health problems among the upper classes. So this is in contrast with the Houyhnhnms, right? How so?

I was just going to say that they eat oats, bread, and honey, but not meat not other animals. And they don’t drink.

I think it’s important that they don’t even understand the concept of a lie. That proves that they are … that they have a very innocent nature.

Good point You’re referring to the fact that they failed to grasp how the crew was able to initiate the mutiny that brought Gulliver to their island.

Okay, so what do the Houyhnhnms think about Gulliver? And what does Gulliver conclude about him¬self?

Well, Gulliver isn’t really a Yahoo and he isn’t really a Houyhnhnm either. I’d say he’s kind of in the mid-dle. But, he’s trying to become a Houyhnhnm. When he goes back to England, he’s actually afraid of other humans… I mean… Yahoos.

But he cant quite achieve his transformation, can he? Even though his pride motivates him to continue the impossible pursuit of perfection So, what does this all mean?

I think it’s like the other chapters. The fourth voyage is … its another critique of the weaknesses in human nature.

Then Swift is making the point that although humankind is capable of rational behavior, we seldom choose to exercise it. The very meaning of the word Yahoo in the Houyhnhnm language is “evil.” So Swift is very satirical then. And when we consider the time period for the book, the early 1700s, we must appreciate the exceptional departure from the literature of the era, which was mostly written to flatter or entertain. Swift used satire to provide the reader with a perspective that’s very different from that of other writers in an age of science and reason.