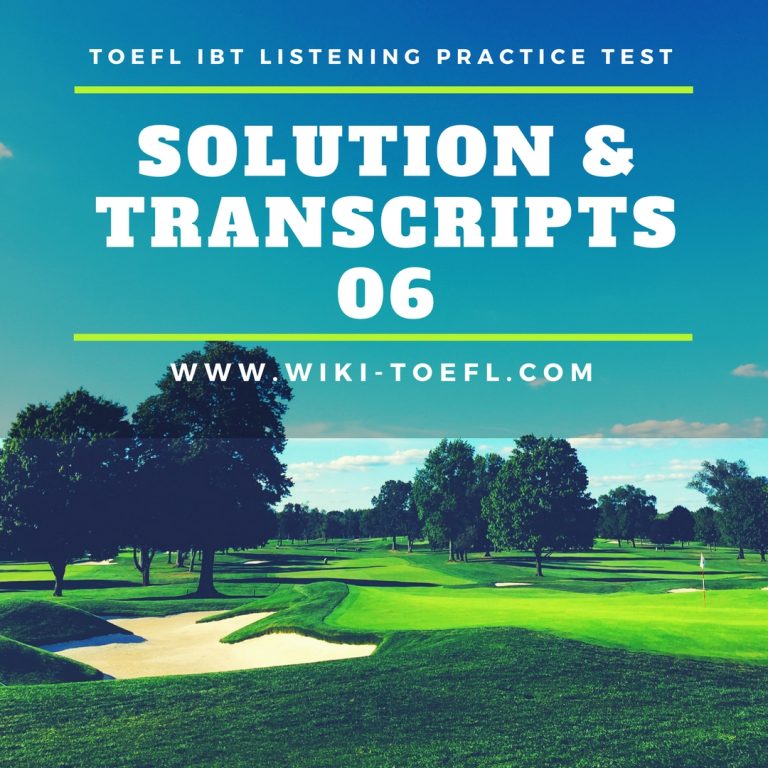 Listen to a conversation between a student and a professor.

Student: Hi Dr. Davis. I’m a little early. Should I wait outside?

Professor: No. Come on in. I’m free. What did you want to talk about?

Student: Well, I’ve read the first couple of books you had on my list… the reading list for my independent study . . . and I was just wondering how you want me to report them to you. We didn’t really talk about that.

Professor: Well, I’m glad you stopped by. Let me think … didn’t you have a project to do in addition to the reading list?

Student: Yes. You said it could be a research paper or I could come up with a proposal for a dif-ferent kind of project.

Professor: That’s right. So. the reading list is … background information then. Why don’t you just come in when you finish the first part of the list. I think it was divided in two distinct parts … so just come in. and we’ll talk about the readings.

Student: You mean I should prepare a synopsis of each book and .. . and kind of report to you on each one?

Professor: No, no. Nothing as formal as that. I was thinking more along the lines of a conversation.

As I recall, the list has a focus, doesn’t it?

Student: Definitely. All of the books are novels and plays from the second half of the twentieth century.

Professor: The Post Modem Period then. And all North American novelists and playwrights.

Professor: So we should be able to find some common threads then. Remember, though, Post Modernism is very difficult to define precisely. Maybe we could start with a discussion of the themes that emerge in the collection of literature from that period.

Professor: I think so, too. And by the time you get through with the second half of the reading list and we get together again, maybe we can figure out whether we’re looking at a logical extension of Post Modernism or whether there’s actually a new movement there … in the readings on the second part. If you’ll notice, there are quite a few minority writers represented, so you might want to think about what that means.

Professor: Good. So have you decided whether you want to do a paper or. . . something else perhaps?

Student: To tell the truth, I’d really like to do something a little more creative. Maybe bring in some visuals on the computer as part of the … I don’t know … I suppose you would call it a mixed media report. But I’ve never done anything like that before.

Professor: But that’s what an independent study is designed to do. It’s an opportunity to experiment and to have some one-on-one time with a professor.

Student: But a research paper is easier in some ways. At least I know that I can do a decent job. The computer project is unknown territory.

Professor: True. But remember, it’s unknown territory for all of us. I think I’ve heard some references to Cybermodemtsfn, if you want to investigate some of the work that’s being created in, as you call it. mixed media literature.

Professor: I think you’d find it interesting. Anyway, it’s up to you. It’s your project.

Student: Thanks. I’m really excited about doing this independent study. Actually. I’m spending more time on it than on any of my other classes.

Professor: I’ve found that students usually invest more time and energy in a class that they can design. That’s why I like to direct them. Oh. and Terry, if you run into any problems, don’t wait until you’re halfway through your reacting list. Just stop by during my office hours. Maybe I can give you some references or at least a sounding board.

Student: Thanks. This is better than I even expected.

Narrator Listen to part of a lecture in an environmental science dass. The professor is talking about wind power.

Today I want to talk with you about another renewable source of energy… wind power. This isn’t a new concept. In fact, wind has been used for centuries to pump waler and launch sailing vessels. But more recently, wind power has been used to generate electricity.

By the year 2000, California was using, maybe 15,000 wind turbines to produce about 400 megawatts of electricity. And that was happening at a cost that would be considered competitive with coal or nuclear power. And, although California currently leads Ihe United States in harnessing wind power, there are several other areas that also hold considerable potential for increased production.

Texas and the Dakotas alone have enough wind potential to power the nation, but, since the winds there are so variable, well, wind power alone would be unreliable as a primary source of continuous energy. Nevertheless, it could be used as a secondary resource, along with fossil fuels. The strong and steady winds of the Pacific Northwest, especially in the Columbia River Basin … these winds would be ideal as a supplement to hydroelectric power when the river is experiencing periods of low water levels. Studies by the U.S. Department of Energy indicate that wind power generated from the Great Plains in the middle of the country could supply the continental United States with almost… 75 percent of the electricity required for the region.

In another section of the same report, it was noted that wind power is the world’s fastest growing energy source. Since 1998. the capacity for wind energy has increased by more than 35 percent worldwide. And improvements in wind turbine technology in the past couple of decades has improved efficiency. cutting the cost dramatically, from roughly 40 cents to about 4 cents per kilowatt hour, and a new turbine design is being tested with a lower torque, so that may actually move the price closer to 3 cents.

Europe currently accounts for over 17 … Oh, sorry that’s 70 … seven–zero percent of the world’s wind power. India, China, Germany, Denmark, Italy, and Spain have published plans for major increases in wind–generated electricity projects in the next few years, and recent interest and exploration have been initiated in the United Kingdom and Brazil. Remote areas, especially islands, and other regions at a distance from electrical grids are vigorously exploring wind options. Clearly, the global implications not only for cheap energy but also for clean energy could be enormous. And, in some areas, the consumers are even willing to pay a subsidy for the pollution-free energy that wind provides their communities. In Colorado, for instance, through a program called Windsource, about 10,000 customers pay an additional $2.50 per month for every 100-killowatt hours of wind power. Legislation in several states in the United States now requires utility companies to guarantee that a percentage of their electricity will be generated from renewable sources like wind power.

Of course, there are some problems associated with wind power that do need to be considered The blades on the turbines present a hazard to migrating birds. In some cases, the vibrations interfere with television reception in the area. And, there have been objections to wind farms because they produce noise and because they’re not visually appealing to residents nearby. So, in addition to the studies to improve turbine design and energy efficiency, some of the attendant problems also require research and development. Regarding the noise, let me mention that design modifications, basically modifying the thickness of the turbine blades and making adjustments to the orientation of the turbines … these modifications have diminished the noise substantially in a number of sites. As for visual appeal, some creative ways to share the land to create a more attractive wind farm are being piloted.

So that brings us to the issue of storing wind power. And, although wind energy can be stored temporarily as battery power, the real challenge for wind power exploration will be how to level out the energy source. Alternatives for storage will be critical because, even in an area with steady winds, wind is still not totally reliable. But, the Tellus Institute has released promising results from studies to investigate the problem of intermittent wind. This is what they did. By dividing the wind turbines from one farm into two smaller farms with geographical separation, the capacity of the pair of farms increased by 33!4 percent over the efficiency of the larger farm with the same number of turbines. So, by taking advantage of the slightly different wind patterns, a more continuous supply of wind power can be generated.

So where are we with all of this? Well, the research that will make wind power a viable option is underway but we need to continue to study … in order to solve some of the problems . . . before we can use wind power as a primary source of energy, globally.