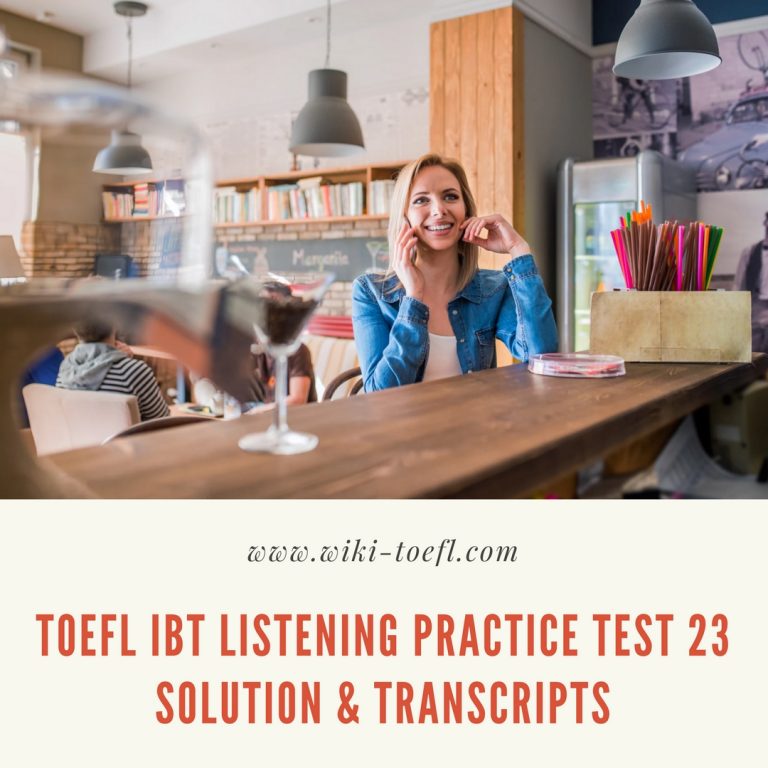 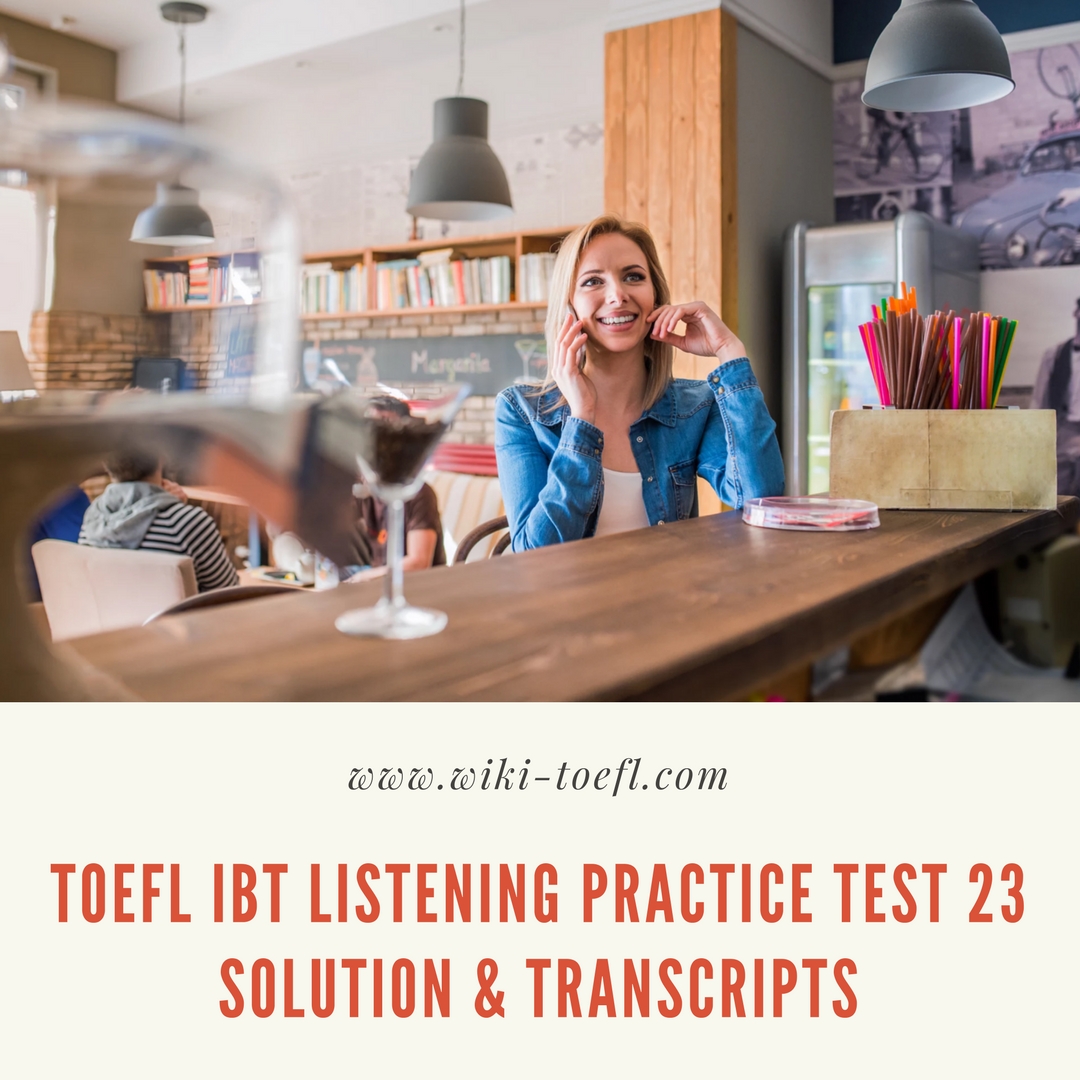 N: Listen to a conversation between a student and a professor.

S: Hi, professor Singh. Thanks for seeing me so close to the exam.

S: Well, I’m a little worried about the test. Um, I’m estimating that I need a C to at least get credit for the course, but I wanted to make sure how much the group project will count for the final grade.

P: Well, all of that was outlined.  In your syllabus, Barry.

S: Well, yes, I know, but I think I got a bad copy. It’s not really clear. Plus, I wanted to find out If the essay question on the test will cover just the most recent chapters or everything we’ve covered so far.

P: OK. Let’s see … the group project will count for twenty-five percent of your grade, just like the tests and your term paper. As for the essay, well, the entire test will apply only to the material we’ve covered since the last test. Ah, you should know that, Barry. I think I mentioned It in class.

S: Oh, I’m sorry. I must have missed that. Um. what about the supplemental reading? Will it be Included on the test?

P: Oh, well, yes. You will have to understand how all of that relates to the text material. Um, yes, you Should pay, ah, particular attention to those articles.

S: Hmm, OK. I see. Professor, could I ask how I’m doing with class participation?

P: Right, wall, I think you’re fine, Barry. Your participation and attendance have been pretty good so far, Don’t forget, though, that your contribution to your group project will be considered for your participation.

S: I see. Oh, that reminds me. Our project Includes a survey. Do we need to get approval for our questionnaire before we use It In public?

P: Yes, absolutely. I want to take a look at anything that will be used off campus. You understand.

S: I got it. No problem there.

P: Barry, I don’t think there’s much cause for concern here. If you’ve taken good notes and stayed on top of ail the reading, everything on the test should make sense to you. As far as the project is concerned, you know, just make sure you do your fair share and check in with me from time to time.

S: Right. I will. I guess I’m Just a little nervous, that’s all.

P: That’s natural, but I think you’re In pretty good shape overall, Barry. Mmm, was there anything else you wanted to ask me?

S: Um, no, I think that covers It. Thanks so much for talking to me, professor Singh.

P: Sure, Barry, and don’t forget to bring that questionnaire to me when It’s ready.

N: Lister to a discussion on astronomy. The professor is discussing Jupiter’s atmosphere.

P: May I begin? I’m sure many of you have seen pictures of the fifth planet from the Sun, Jupiter. Maybe a few of you have tried looking at the planet through a telescope. Well, what you are looking at is not the surface of the planet. It’s the atmosphere. So this Is what we’re going to discuss today … and I hope you did the readings because I’d like as many of you as possible to participate in the discussion.

F: Um … the light region is called a zone and the dark region Is called a belt You have aitemating zones and belts. The zones are actually higher In altitude than the belts, which means they’re cooler. And the belts are areas of low pressure.

P: Very good, Emma. And It’s these alternating zones and belts that have helped astronomers learn some-thing about Jupiter’s constitution. They were able to make certain contrasts between Earth and Jupiter. How did they do that? Well… every part of the Earth rotates at the same speed. That’s because it’s a solid. But what is Jupiter’s rotation like?

M:  It’s not all the same. Some parts are faster, The poles are faster. The equator area is slower.

F:  It means Jupiter is not solid.

P: Correct And one more thing. The speed of the rotation lends Jupiter’s atmosphere its characteristic bands. Now … In between these bands, jet streams develop. Jet streams are high-speed hlgh-altltude air streams flowing from west to east. On Earth, jet streams can affect the overall weather in a given area. Weil, we see this happening on Jupiter, too. Some jet streams last thousands of years. Perhaps one of you can describe to the class a result of Jupiter’s jet streams.

F: Old you say infamous? It’s like any other storm only bigger, stronger and colored red.

P: Right. Well, actually, It’s a bit smaller now. Its size keeps changing since It was first observed by English astronomer Robert Hooke In 1630. But, but let’s move away from the Spot and look at the atmosphere of Jupiter as a whoie. Can anyone here tell me what heavenly body within the Solar System has more or less the same constitution as Jupiter besides Saturn?

F: Uh … It can only be the Sun. Both Jupiter and Saturn are made of helium and hydrogen … just as the Sun Is.

P: Yes … the percentages are different, though, Saturn has 75% hydrogen and 25% helium, the Sun Is 94% hydrogen and 6% helium and Jupiter is somewhere In-between with 82% hydrogen and 18% helium, There are also trace amounts of cartoon, ethane, ammonia, and methane. At the top of the, uh. lighter bands, you’ll have ammonia ice crystals, and Just beneath, liquid ammonia.

F: I have a question, professor. You just now mentioned liquid ammonia … but the, uh, recent Galileo probe mission Into Jupiter’s atmosphere revealed that Jupiter is drier than scientists beileved. So … just how much water Is there on Jupiter?

P: Good question. I’m glad you brought that up. Yes, the Galileo probe mission did discover some very startling things about Jupiter … but the Information I’ve chosen to give you Is what’s still In the textbooks only because the new data has yet to be confirmed. But for those of you who are curious … maybe we can just sum up what the Galileo mission discovered- They found that the helium on the planet was half what they expected it to be … so we might be looking at a configuration that’s closer to the Sun’s own percentages. There was less neon, carbon, oxygen and sulfur. And the probe aiso discovered that the three–tiered cloud structure they had been expecting was not there. It’s absence, along with the lower amounts of oxygen, seems to tie In with a Jupiter that has a dry atmosphere. Why Is this so surprising? Well, clouds form when a compound of chemicals condenses from a vapor Into a liquid … or Into Ice. So scientists believed that there were three layers of clouds-one made of ammonia, the second of ammonia hydrosulfide and the third of water, But … as the Galileo reported, the three tiers weren’t there and the water wasn’t there. Puzzling, huh? So … just how much water is there on Jupiter? Well, that has yet to be determined … and there will probably be a readjustment of our existing views of Jupiter. Is that OK?

P: So let’s go back to the atmospheric structure. The atmospiie’e Is about a thousand kilometers thick, which is tfio same thickness as the Earth’s atmosphere, but Jupiter being a gas giant, ttie atmosphere simply gets more and more dense as you go down until it reaches what scientists believe to be a total liquid state. Well, let’s stop here, and I’ll give you the readings for the next class.