Question 1-5; Listen to a conversation between two students. 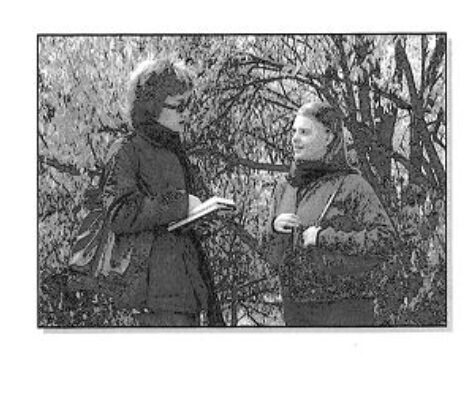 1. What are the speakers mainly discussing?
A. The works of the architect Aldo Rossi
B. The professor’s lequirements for a paper
C. Requirements for an architecture course
D. A report they are doing on a building designer

2. Why did the man choose Aldo Rossi for the report?
A. He has had an impact on architecture.
B. He is the best architect in the world.
C. He is not well known by many people.
D. He has designed the most number of buildings.
3. What aspect of Aldo Rossi’s architectural worfc does the man admire?
A. His regard for the memories of a city
B. His excellent memory for details
C. His ability to add function to a building
D. His worldwide influence on architecture

Listen again to part of the conversation. Then answer the question.
4. What does the woman mean when she says
A. She is not familiar with Aldo Rossi’s theory.
B. She believes Aldo Ros & has a good theory.
C. She thinks the topic would be good for a
D. She thinks they should start writing the

5. What can be Inferred about the man?
A. He has other topic ideas in mind.
B. He wants to do research before deciding on
C. He wants to ask the professor for advice
D. He was certain the woman would accept

Question 6-11: Listen to a talk on city planning in the United States.

8. In the lecture, the professor describes the changes that took place in American cities in the 19r and 20* centuries.
Indicate whether each of title following is a change. Click In the correct box.

Listen again to part of the talk. Then answer the question.

9. Why does the professor say this:
A. A To check whether the students did the assigned reading
B. By To express uncertainty about the history of gridiron
C. To encourage the students to participate in the discussion
D. To remind the students of something he discussed earlier

11. What can be inferred about early city planners in New York City?
A. Their designs were geared for low and middle-income residents.
B. They were not cooperative with each other.
C. They put a premium on attractiveness.
D. They considered functionality the most important aspect.

Question 12-17; Listen to a talk on a medical technique.

12. What does the professor mainly discuss?
A. The stress caused by an impending surgical procedure
B. What preoperative methods have achieved in patients prior to surgery
C. Communication between surgeons and patients
D. The most successful relaxation techniques for depressed patients

13. What does the professor say about patients scheduled to undergo operations?
A. They have an increased mortality rate because of age.
B. Their greatest fear is making a fool of themselves after surgery.
C. They are as anxious as the surgeons about the outcome of the operation.
D. Their worries can cause their chances of dying to increase.

14. What can be inferred about the surgeon- patient relationship?
A. It is not especially close because of the treatment involved.
B. A surgeon is not required to give his patient special care.
C. A patient looks to his doctor for comfort and reassurance.
D. A surgeon and his patient naturally develop a close relationship.

15. What does the professor mean when he says this:

A. He wants to give an example of an issue he brought out earlier.
B. He thinks the surgeons must determine what is proper for patients.
C. He does not think it is necessary to inform patients about procedures.
D. He thinks the information he is giving is unimportant.

16. According to the professor, what do studies on various relaxation techniques indicate?
A. Only some techniques are approved for calming patients.
B. The most effective technique ¡s deep breathing exorcises.
C. The success of a technique depends on the cooperation of the patient.
D. All of the techniques achieved some success in relaxing patients.

17. What does the professor imply about studies on relaxation techniques?
A. They are inconclusive.
B. More have to be conducted.
C. They were not properly done.
D. They were Incorrectly recorded.

Question 18-22: Listen to a conversation between a student and his professor.

18. What are the speakers mainly discussing?
A. The benefit from wording as a teacher’s assistant
B. Part-time work the man has taken
C. The money problems the man has
D. The paper the man Is doing for professor King’s class

19. What can be Inferred about professor Lucas?
A. She would prefer rt if the man quit his restaurant job.
B. She will recommend another student for the teacher’s assistant job.
C. She will help the man with his money problems.
D. She is worried the man is not making enough money.

20. In the conversation, the man gives several reasons why he wants to keep the restaurant job.
Indicate for each of the reasons below whether It was a practical or an academic reason. Click In the correct box.

23. What is the main idea of the talk?
A. The development of glaciers around the world
B. The shrinking of glaciers and its effects
C. The effects of global warming on glaciers and icebergs
D. HOW a glacier forms and moves

24. What are two characteristics of glaciers? Choose 2 answers.
A. They move like a slow river.
B. They melt during warmer seasons.
C. They develop mostly on mountains.
D. They form on every continent.

25. In the lecture, the professor explains the sequence of steps that takes place in glacier formation and movement.
Put the steps listed below in the correct order. One of the answer choices will not be used.

27. What can be inferred about ocean rise?
A. It was originally believed to be a result of glacier retreat temperatures.
B. It may be caused by glaciers flowing into the ocean.
C. It is not as much of a threat as scientists once believed.
D. It has not been studied enough for scientists to determine its cause.

28. In the lecture, the professor describes some
possible effects of glacial retreat, indicate whether each of the following is a possible effect. Click in the correct box for each phrase. .

Question 29-34: Listen to part of a lecture in a history class.

30. Why does the professor start by asking who invented the printing press?
A. To point out the students’ lack of knowledge
B. To draw attention to a common misconception
C. To establish a fact to be supported later In the lecture
D. To give an example of a simplified view in history

32 According to the professor, what was the greatest development in print technology?
A. Woodcuts
B. Movable type
C. Metal type
D. Cultural migration to Europe

33. Why did the printing press have such a big Impact in Europe?
Choose 2 answers.
A. Phonetic alphabets
B. Latin-based languages
C. Advanced metalworking technology
D. Charged religious environment

34. What is the professor’s opinion of Johannes Gutenberg?
A. He thinks that Gutenberg receives undeserved credit. .
B. He feels that Gutenberg was more lucky than inventive.
C. He resents the fact that Gutenberg made the first printing press.
D. He respects Gutenberg as a businessman but not as an inventor.