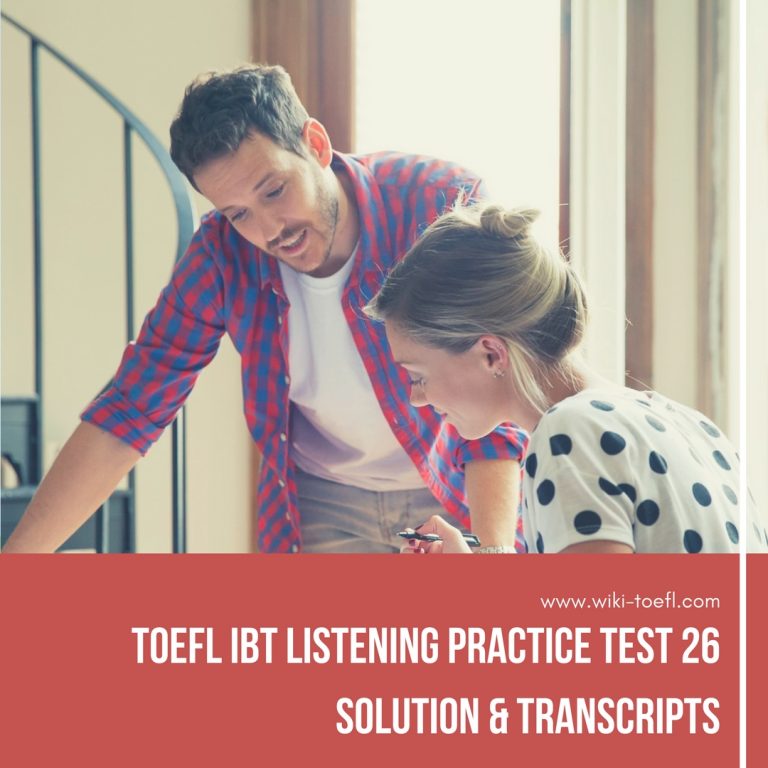 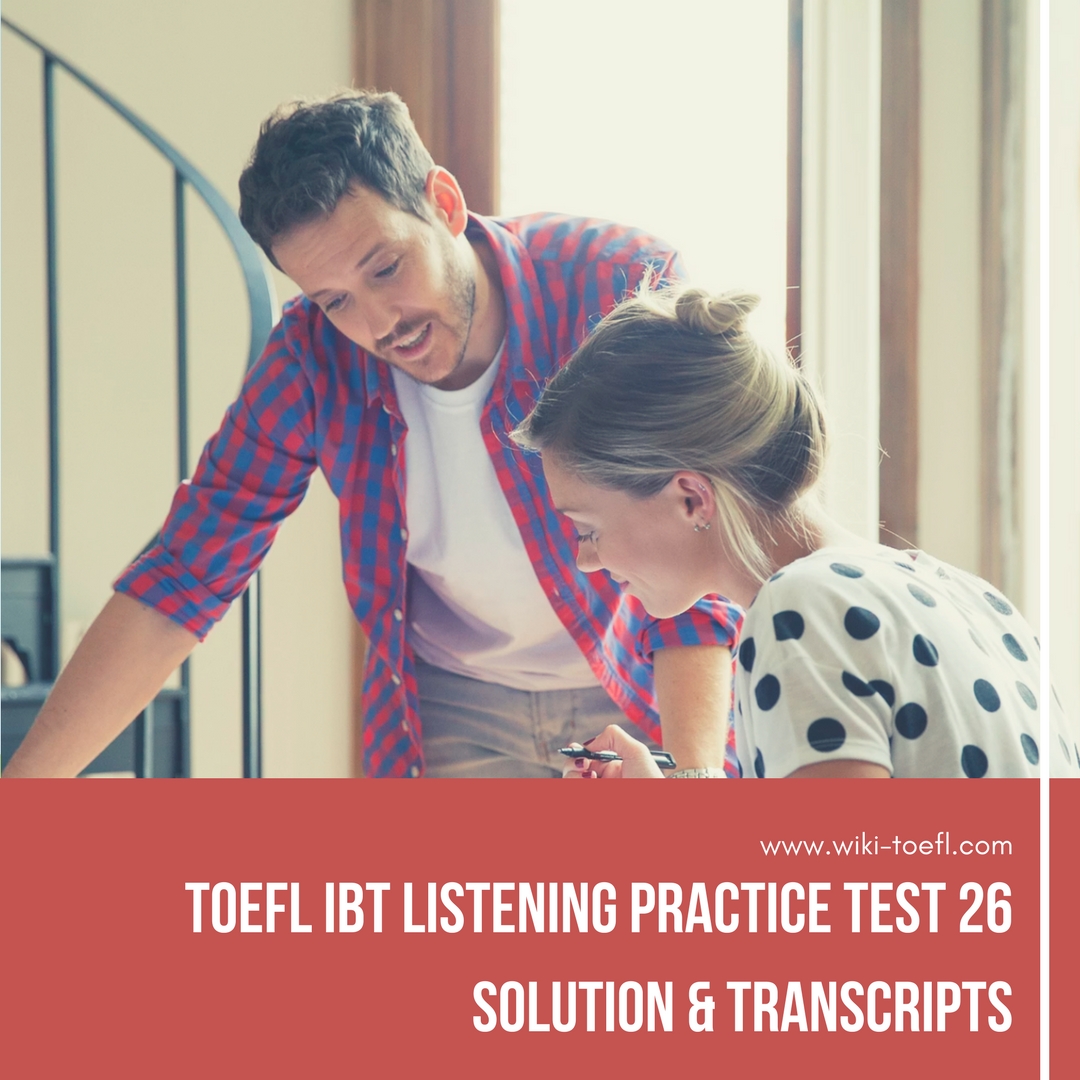 N Listen to a conversation between a student and her professor.

S: Professor Keyes? May I come In?

S: It’s the lab experiments, professor. I’m getting different results from everyone else, so I thought better ask for your advice or else I’ll fall the class.

P: Not everyone gets the right results but … well, the only reason I didn’t talk to you about this is I thought you might’ve discovered on your own what you were doing wrong.

S: Well. I’ve gone over every step of every experiment we did in the lab, and I haven’t been able to figure out where I went wrong In any of them.

P: OK, I think you probably study the steps carefully and you’ve probably even memorized what to do …

S: Yes, that’s what I do before every experiment.

P: But I’ve observed something in my classes ever since I started teaching chemistry. Some students know the steps Involved In an experiment but they don’t understand the purpose and the objectives of the experiment.

P: Do you actually read through the reference and the handouts I give?

S: Um, not really. I just find It very difficult reading … so I thought that If I just did the experiment right, I mean, you know, the steps, I’d be able to understand what It was I was doing.

P: Well, think about It this way, Jessica. Knowing what the steps are will help you when you write up a lab report, but would you be able to write a conclusion about the results If you didn’t understand what you were doing?

P: So … why not spend just half an hour going through the material … and If It Isn’t clear to you, you can either ask me … or you can go over to the Chemistry Club … there are a lot of really helpful students there who’d be willing to explain It to you.

P: There’s something else. I’ve noticed that you aren’t always precise in your measurements. You’re not going to get the results you’re looking for If you don’t measure things right… or heat an Ingredient at the right heat … or heat it for the exact amount of time required.

S: Does it really have to be that precise?

P: Sure It doesl And this is something you would’ve learned if you had read the textbook and my handouts.

I better go and read the textbook now … and 1*11 take your advice about asking for help If I don’t understand what I’m reading.

N Listen to part of a lecture from a neuroscience class.

S: OK class, I have an interesting statistic for you today. According to current research on sleep disorders in this country, at least 33% of the population suffers from one form of sleep disorder or another. So, uh … that’s roughly 20 people in this class alone, right? Now, if I asked for a show of hands, we probably wouldn’t get an accurate result. This Is because many people go through life undiagnosed. How so? Well, one of the reasons sleep disorders go untreated Is because people who suffer from poor sleep blame things such as tension at work or problems at home, not realizing that there is a medical condition that better explains their tiredness.

Besides insomnia, the most common form of sleep disorder is sleep apnea. Do we have anyone from Greece here? No. OK, well apnea is a Greek word meaning “without breath.” People with sleep apnea actually stop breathing hundreds of times for about ten to twenty seconds at a time in the night. According to the National Institute of Health, sleep apnea affects more than twelve million Americans. To put that number into perspective, um, let’s see … that number Is comparable to the amount of people in our country who suffer from diabetes. In fact, the risk factors are actually similar to diabetes as well. Your chances of having sleep apnea rise if you are male, over forty, or overweight. Now, even though these risk factors don’t seem to apply to any of you In here,

I should note that sleep apnea can affect anyone, even children.

Obstructive sleep apnea, often referred to as OSA, is the most common of the three types of apnea. Approximately 90% of those who suffer from sleep apnea have OSA. The cause of OSA Is a blockage of the airway. Uh … sorry, those of you who haven’t had first-aid training may not be familiar with the term “airway.” What I should say Is that air is blocked from entering the trachea, otherwise known as the windpipe. This is the passage that brings air into your body. There are a number of different things In your mouth that could cause this blockage. One is the uvula, or uh … the small thing that hangs at the back of your throat. The tissues and muscles In your throat can also cause this blockage If they are overly strained. In some cases of OSA, the tongue is found to be the culprit. The other two types of sleep apnea are central and mixed apnea. Central apnea is caused by a brain malfunction that forgets to signal muscles to breath. And I’m sure I don’t need to mention that mixed apnea Is a combination of the two.

I know what you are probably thinking now. If sleep disorders go undiagnosed so often, how will you know If you’ve got sleep apnea? Well, unfortunately, many people who suffer from sleep apnea do not recognize the symptoms of the condition because they don’t notice themselves gasping for air, It Is usually a partner that first notices strange breathing and waking In the night. Loud snoring is usually accompanied by frequent arousals caused by the brain signaling for the sleeper to wake up and breathe. People who sleep alone might not realize they are waking in the night, but will notice tiredness during the day. Headaches, memory loss, and lack of concentration are early signs of a sleep disorder. Sleep apnea can make it dangerous to operate a vehicle and can affect one’s job performance. Need I mention falling asleep In class? All kidding aside, severe sleep disorders, such as OSA can cause high blood pressure and cardiovascular disease if left untreated.

So, what can be done for those who are diagnosed? Well, as It turns out, there are plenty of simple and non-intruslve solutions. For starters, sleep experts usually suggest avoiding alcohol, sleeping on one’s side Instead of one’s back, and losing weight. Elderly people who use sleeping pills are asked to put away their medication for an experimental period to see if the apnea disappears. Ironically, sleep medication can relax the muscles too much, causing the air to get blocked. In cases where symptoms do not Improve, patients are sometimes treated with CPAP, which means wearing something similar to an oxygen mask to bed at night. Sorry, I should mention that CPAP stands for Continuous Positive Airway Passage. In very extreme cases, routine surgery Is used to eliminate the problem.