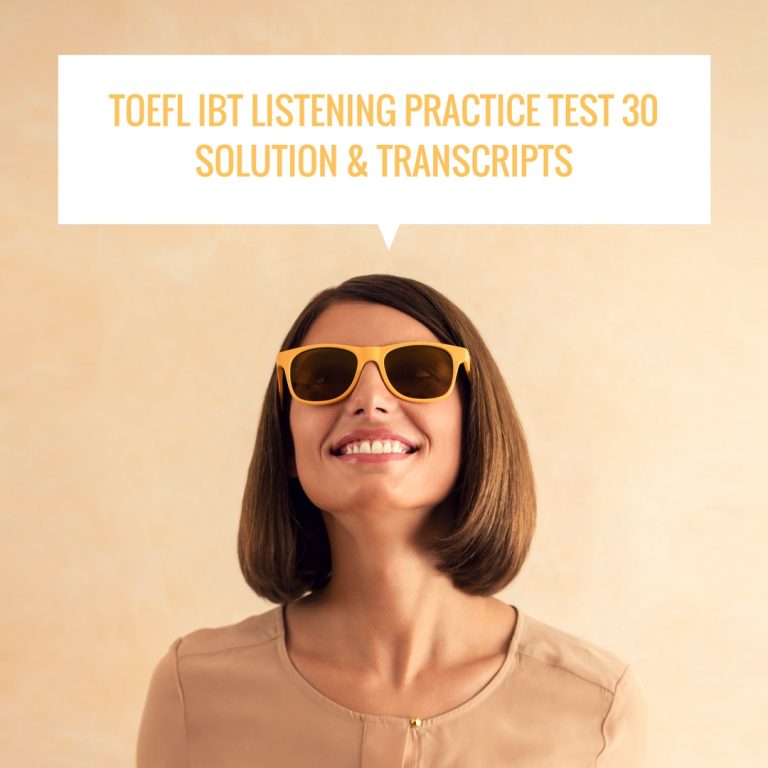 Listen to a conversation between a student and an employee in the campus computer center.

Hi, what can I help you with today?

Hi, um, I wanted to—you see, the thing is, I don’t know much about computers, so I was wondering if, uh, if there’s a class or something … so I can learn how to use computers, like to write papers for my classes.

Oh, I see … um, we don’t really offer a course for beginners, since most students already have computing experience. But all the computers in our labs have a general tutorial installed on them. You could just go there and run it.

And the tutorial explains everything? I mean, it might sound strange but I’ve never used a computer.

Well, all the computer labs on campus are staffed with student assistants, and I’m sure that any one of them would be more than willing to get you started.

Yeah? That sounds good. But is it expensive?

No, in fact, it won’t cost anything; it’s one of the services of the computer center.

That’s great. How do they—I mean, how do I get in touch with the student assistants? Should I just go to a computer lab and ask whoever’s there?

Sure, you could do that, or I can let you have a list of names of the students who are assistants in the labs. You might know one of them.

Actually, I think I’d prefer someone I don’t know, um, so I can ask dumb questions .

Is there anyone you’d recommend?

All of our student assistants are really knowledgeable about computers. I mean, they have to be, in order to work in the computer labs … It doesn’t mean that they’re necessarily good at teaching beginners … but you probably won’t be a beginner for very long.

And I just thought of something else. The bookstore has a lot of books on computers—there might be one for people like you, I mean, people who don’t have a lot of experience with computers. I actually bought one for my father so he could learn how to use e-mail, basic word processing, that sort of thing—and it worked pretty well for him.

OK, I’ll try that, too. And if the bookstore doesn’t have it, they can just order it for me?

Right. Now is there anything else I can help you with today?

Uh, just the list of names and the times they’re working. I’d like to get going on this as soon as possible.

Listen to part of a lecture in an economics class.

When attempting to understand international trade, some things seem so obvious that they can hardly be controverted, and other points that are important are invisible unless you’ve thought about the subject carefully.

Consider the following: if there’s an increase in imports, let’s say, um, let’s say imports of furniture, and the domestic producers of furniture find this new competition very difficult and are cutting production and employment, then it seems obvious and easy to understand and many people conclude from this that increasing imports will cause generally greater unemployment at home.

What is not so obvious is that how much we import and how much we export… those are interdependent and you can’t understand the one without the other. But the exports that are generated are not easily discernable, so most people don’t see them. They see only the imports of furniture rising and employment in domestic furniture production falling.

So as a result, many people argue that we ought to protect jobs by limiting imports— either by tariffs, quotas, regulations, or whatever—without realizing that this also has the effect of reducing potential future exports to the rest of the world, things that we can produce very, very … cost effectively and therefore profitably.

The fundamental proposition in international economics is that it makes sense to import those things that we … that can be produced more economically abroad than at home and export things to the rest of the world that we can produce more cost effectively than produced elsewhere in the world. Therefore, if we limit imports we put ourselves in danger of not being able to export.

The details of this relationship will take much longer to explain than I can fully go into now but the point of the matter is that gains—the benefits of gains—from international trade result from being able to get things cheaper by buying them abroad than you can make them at home. Now there’re some things that we can make at home that are .. . that we can do more economically than they can do abroad.

In the case of the United States, typically high-technology products, uh . .. are things that Americans have innovated in and started firms doing that sort of thing at which they do very well. Whereas goods that produce … that use a lot of relatively low skill labor, like furniture production, cotton production, sugar production … those are things that are frequently made more inexpensively in places where wage rates are low and the cost of using capital is very high.

However, in Florida they produce a lot of sugar, but the costs are so high, if we didn’t have extensive restrictions on imports of sugar, the output of sugar would decline dramatically. But the sugar industry in the U.S. doesn’t produce high-paying jobs, it uses resources in ineffective ways and it blocks the import of more cost-effectively produced sugar. It, it’s a very bad bargain for the people in the United States to want to protect low-paying jobs thereby halting the growth of world trading and international… uh, more international specialization. It would be better to remove restrictions on imports and allow other countries in the world … countries that can produce them more cheaply … let them specialize in producing those products.

Now, I agree that people who are directly affected by imports, what they focus on … is, is that their prospects … their job prospects are being reduced, and their economic circumstances are getting worse. And that’s a relevant problem and an important problem; what isn’t so obvious is … that by retraining and relocating people to places and industries where jobs are expanding rather than contracting, we can make the whole economy function more effectively and productively than by trying to block imports.

Um, what is interesting to note is that, even if there were no international trade issues, like imports, any changes that occur in a country’s economy—any new technology, change in preferences, change in regulations or whatever—will lead to “adjustments” that lead some sectors of the economy to decline and others to expand.

And that’s what we have to figure out, and that’s a hard problem to deal with in detail, is howto facilitate people adjusting from sectors where their job prospects are not so good, and in particular where real wages aren’t so high, to acquire skills that will permit them to move into higher-paying jobs in other parts of the economy either by retraining or relocating. Helping pay for the relocation of these people would be very helpful, but trying to block the changes is really counterproductive. It makes people in our country poorer, and it makes people elsewhere in the world poorer as well.