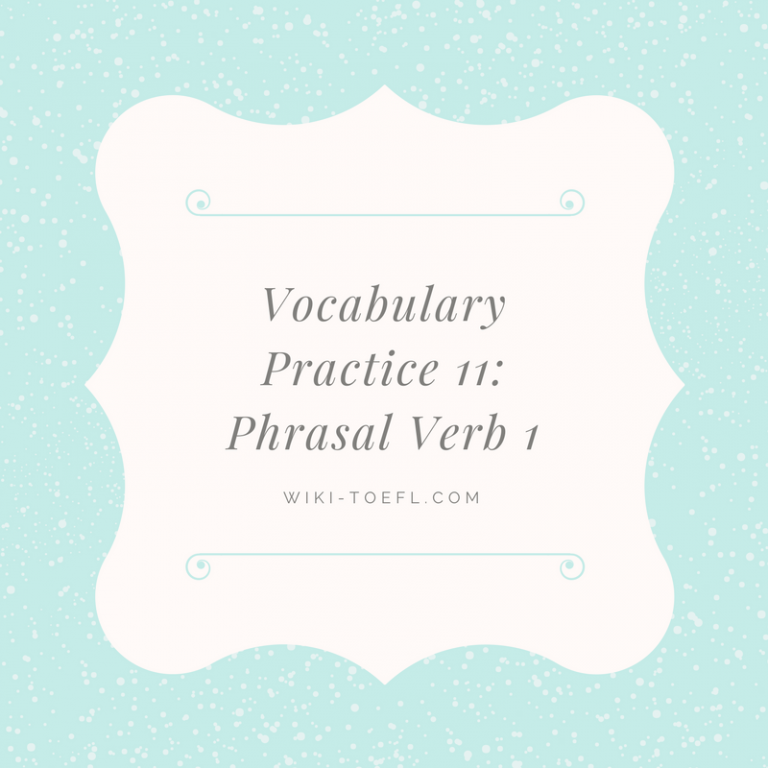 Phrasal verbs are very common in English, and should be learnt like any other item of English vocabulary. In the TOEFL, they are tested in the Listening Comprehension section, and appear frequently in other parts of the test.
Exercise 1:In the following sentences, choose the correct verb in bold to complete the phrasal verb in italics. The meaning of each phrasal verb is given in brackets at the end of each sentence.

1. Some parents are criticized for the way they bring / make / throw up their children. (to raise children)
2. They refused to move / face / come up to their responsibilities, with disastrous consequences. (to accept an unpleasant state of affairs, and try to deal with it)
3. The President decided to shout / cry / call off his visit to Europe. (to not to go ahead with a plan)
4. It is only at election time that senators add / count / read on support from their constituents. (to rely / depend on other people)
5. Many developing countries are failing to run / chase / catch up with their more developed neighbors. (to get to the same level)
6. It can take months or even years for political scandals to die / cut / fall down. (to become less strong)
7. An alarming number of students jump / drop / fall out of school early every year. (to leave a race, a competition, a course of study, etc., early or before you have finished)
8. Major international companies can’t carry / cut / figure out the popularity of the anti-capitalist movement. (informal: to find it hard to understand)
9. The committee members dropped / made / fell out over plans for the new health center. (to argue)
10. If they examined the issues more closely, they would search / look / find out the reasons. (to discover)
11. As we grow / stand / look up our priorities change. (to change from being children to being adults)
12. Salaries very rarely catch / keep / work up with the cost of living. (to rise at the same speed as something else)
13. The latest government report leaves / keeps / throws out the real reasons for current demographic shifts. (to not include)
14. The journalist showed / pointed / spoke out the mistakes made by the agency over the last few years. (to show)
15. Before you write your essay, you should search / hunt / look into the Party’s history. (to research)
16. Nobody at the meeting carried / brought / moved up the subject of paid leave. (to start discussing a subject)
17. Once people lose / jump / fall behind with their mortgage payments, they come under extreme financial pressure from their bank. (to fail to do something or pay something at the time that you should)
18. The first step to a healthier lifestyle is to cut / slice / chop down on the amount of saturated fats you eat. (to start doing less of something, usually because it is bad for you)

Exercise 2: Instructions as above. In one of the sentences, all of the verbs are possible.

1. During the early 2000’s, a lot of state-run schools were controlled / taken / acquired over by private companies. (to start to do something in place of someone else)
2. In my last essay, I tried to argue / place / put forward the arguments in favor of global capitalism. (to suggest or state the case for something)
3. Despite the seriousness of the illness, he managed to carry / pull / take through. (to recover from a serious illness or accident)
4. A lot of restrictions on imports have been done / gone / put away with. (to get rid of something)
5. If you have a complaint, put it in writing and ask the company to investigate / look / see into it for you. (to try to discover the facts about something such as a problem)
6. It is very important to carry / work / do out my instructions carefully. (to do something that you have been told to do, often in a particular way)
7. Many employees went / kept / carried on working despite pressure from the unions. (to continue)
8. The drug’s effects are very powerful, but they begin to wear / come / fall off after a few hours. (to gradually disappear or become less intense)
9. The meeting will be canceled if not enough people arrive / move / turn up. (to come somewhere, often unexpectedly)
10. At first, sales of the product were slow, but they kicked / hit / picked up when people realized how useful it was. (to slowly improve)
11. I have given / put / moved across several suggestions, but so far they have all been ignored. (to explain an idea, often in a way that is easy for people to understand)
12. I came / ran / moved into Laura outside the theater last week. (to meet someone by chance)
13. This course has set / moved / put me back by about $2000. (informal: to cost someone a particular amount of money, especially a large amount)
14. When I look / consider / move back on my childhood, I remember the many sacrifices my parents made for me. (to think about something that happened in the past)
15. We were all disappointed with the way things turned / came / changed out. (to develop in a particular way or have a particular result)
16. The exhibition was so popular that a lot of visitors had to be pushed / turned / thrown away. (to be not allowed to enter a building)
17. The total cost of the project makes / moves / works out to about $250,000. (to add up to a particular amount)
18. The telephone service is rather unreliable, and it’s quite common to be cut / shut / run off in the middle of a conversation. (to be disconnected while talking on the telephone)