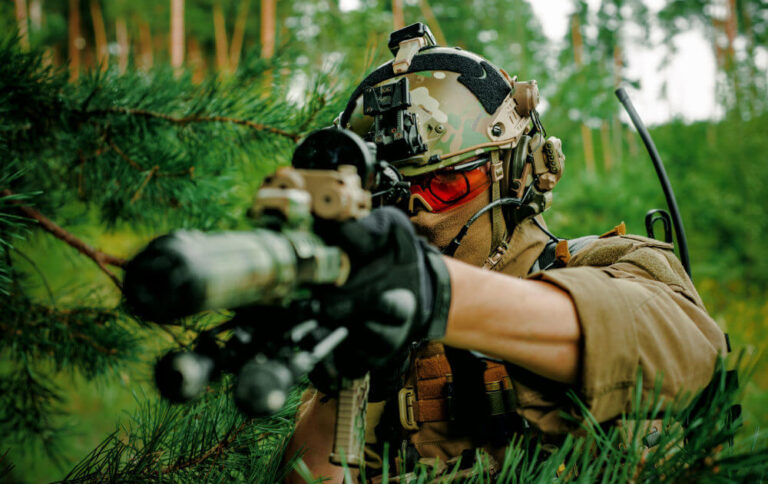 So you’ve heard of Airsoft and now you’re wondering what all the fuss is about. Maybe you’re a hardcore paintballer and want to know if it’s worth making the switch to Airsoft.

There is an ongoing battle between Airsoft and paintball. Which is the better way to spend your weekends. The only answer to that is, of course, personal preference. Check out Quora to read how people compare the two.

Paintball is the more popular of the two, but that’s because there are more paintball operations (especially in the UK) than there are Airsoft events. What is evident is that whichever activity you choose, you are almost guaranteed an adrenaline-fuelled experience.

The key difference between paintball and Airsoft is that the latter is more focused on simulating an authentic military experience. The best airsoft events feature authentic battlegrounds complete with military props – and even a fleet of military vehicles.

Airsoft participants are dedicated to making skirmishes as realistic as possible. Whilst replica military guns and safety vests are available for hire, fanatics are typically kitted out with their own gear.

The games are also military-themed. Airsoft organisers typically play several games that focus on a different goal. For example, there may be a deathmatch, the last man standing competition or fast shooting competition.

These additional competitions will be organised outside or inside the main activity which typically takes the form of a “skirmish” or a full-on military simulation (MilSim).

Skirmishes and MilSims fully engage the military-style focus of Airsoft by pitting two teams against one another in battle-like conditions. Teams are highly organised, and may even feature a hierarchal system of command.

Airsoft relies heavily on the honesty of the participants. If you’re shot, you have to remove yourself from the game. However, unlike paintball, Airsoft pellets do not leave a mark to indicate you’ve been shot. This is paintballers win the one-upmanship in the Airsoft v paintball debate.

If you’re declared dead, it’s against the rules and the spirit of the game to give away the position of opposition players. The purpose of the trust-all rules is to build camaraderie and respect among players – especially the regulars.

The weapons used in Airsoft are different to paintball markers. Again they closely resemble actual military guns such as AEG rifles (Automatic Electric Guns) that can shoot off multiple rounds with a single trigger pull. Pellets are loaded into a magazine which slots into the gun.

Imitation rifles add to the look and feel of an actual war zone – except the pellets are hard plastic or composite biodegradable material rather than metal bullets.

This is where Airsoft has a lot of appeal in paintball. Plastic pellets are less painful than paintball pellets because they are lighter and carry less energy. Airsoft guns are limited to between 1.14joules and 1.68 joules whereas paintball markers blast you with 14-16 joules which naturally causes bruising.

Airsoft champions win the safety debate. Of course, hardcore paintballers hit back way calling Airsoft fanatics pansies. But at least they are pansies without painful bruises.

Which military-themed activity do you prefer, Airsoft or paintball?