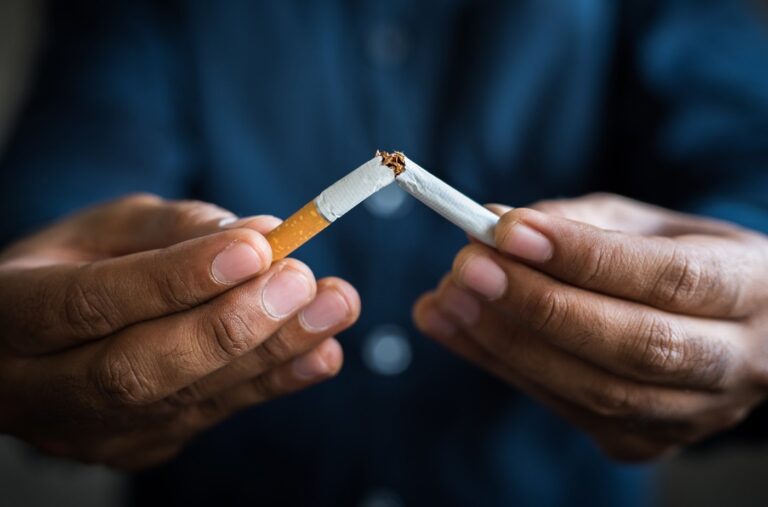 You know you should quit smoking, but it’s difficult to do. There are many reasons to quit it. The American Cancer Society quotes the U.S. Surgeon General as saying, “Quitting smoking is the most important action that smokers can take to improve the quality and length of their lives.”

There are decades of research to prove how harmful smoking is to the body. Although it’s common knowledge that smoking causes lung cancer, it also damages the body in many other ways. The following are a few health reasons why you should quit smoking.

Hazardous to the Lungs

When you smoke, chemicals are inhaled into your lungs. These chemicals can damage breathing function and cells within the lungs. About 90% of all deaths from lung cancers are caused by smoking. For women, more die from lung cancer than breast cancer.

Lung diseases like COPD can also be caused by smoking. About 80% of COPD patients are smokers. With COPD, people have difficulty breathing because the lungs become inflamed.

Hazardous to the Heart

The lungs and the heart work closely together, and smoking affects both in significant ways. People who smoke have a higher risk of heart diseases and stroke. The CDC states that even for people who smoke less than 5 cigarettes a day, early heart disease is already present. It also injures blood vessels and raises blood pressure, causing further damage to the body.

Cancer cells can grow due to smoking. It increases the likelihood of cancer growing anywhere in the body. For instance, the following cancers occur at higher rates in smokers:

Aside from the health benefits of quitting smoking, many smokers simply want to take back control of their lives. There is also a social stigma attached to smoking. Smokers are forced to smoke in smoking booths or outside due to the dangers of secondhand smoke. Then there is the smell of smoke on clothes as well as all the money wasted on a habit that is often deadly.

You Should Quit Smoking Today

When you quit smoking, your body immediately starts to try to heal itself. The risk of a heart attack, for example, drops within 1 year of quitting smoking. The risk drops even lower at 2-5 years of being smoke-free. For those who have quit it for 5 years or more, the risk of stroke drops to that of someone who doesn’t smoke.

Unfortunately, quitting smoking is not easy. Especially for people who don’t want to take medication, quitting it can take several stops and starts until quitting sticks for good. Counseling and alternative therapies can help people to quit smoking. Acupuncture and hypnosis sessions are other medication-free methods to help curb cravings from smoking.

Hypnosis is portrayed in movies and on TV as an all-powerful and magical way to control people. While this is not true, hypnosis has helped people lose weight, stop smoking, manage pain, and overcome fears. Hypnosis is a natural state of focus and dissociation where the conscious mind is bypassed, and the unconscious mind is open to receiving positive suggestions. To learn more, visit the NYC Hypnosis Center.

Stanford University researchers set out to learn what happens in the brain during hypnosis. The hope was to determine if parts of the brain functioned differently with patients who were guided into hypnosis. There was increased activity in the part of the brain that controls what the body does.

There are many common misconceptions about hypnotic trance. Some people believe that hypnosis is a form of mind control. While hypnotherapy is extremely powerful, only hypnotic directions that the patient truly wants will be accepted by the unconscious mind. It is impossible to get stuck in hypnotic trance or to be forced to share secrets with a certified hypnotist. Hypnotic trance is safe, relaxing, and a powerful tool that can be used for accelerated and profound change.

How is one guided into hypnotic trance?

By following the direction of a seasoned hypnotherapist, patients are guided into a state of hypnotic trance. Patients often report feeling rested and relaxed, but they are not asleep and remain aware of their surroundings. Hypnotic trance is achieved through a combination of misdirection, guided imagery, breathing exercises, confusion, and relaxation.

Once hypnotic trance is achieved, the unconscious mind can be reprogrammed. The subconscious mind is taught to eat healthy portions of healthy foods or in the case of smoking to be free of nicotine cravings. In hypnosis, the inner mind is open to positive changes which include, but are not limited to, overcoming addictions, releasing stress, overcoming fears and phobias, and automatically making healthy lifestyle choices.

Letting go of the past

After being guided into a relaxing hypnotic trance, experiences from the past that cause us to respond in a negative or limiting way can be uncovered. Once found, these limiting beliefs and experiences can be released and reframed. Being told you are not a man unless you smoke can have long lasting implications. This is an example of an event that the subconscious mind holds onto and must be released to help a client quit smoking.

Through hypnosis, a certified hypnotist can help to identify what triggers your need to smoke. By targeting your subconscious, hypnosis can change the way you view smoking and any cravings you might have. A hypnotist can program your mind to seek other healthier habits. Hypnotherapy is a fast and natural way to be free of nicotine cravings. Patients can quit smoking in as little as one to three sessions. There are many reasons why you should quit it but the most important one is almost always health. With the help of hypnotherapy, smokers can take back control of their lives.