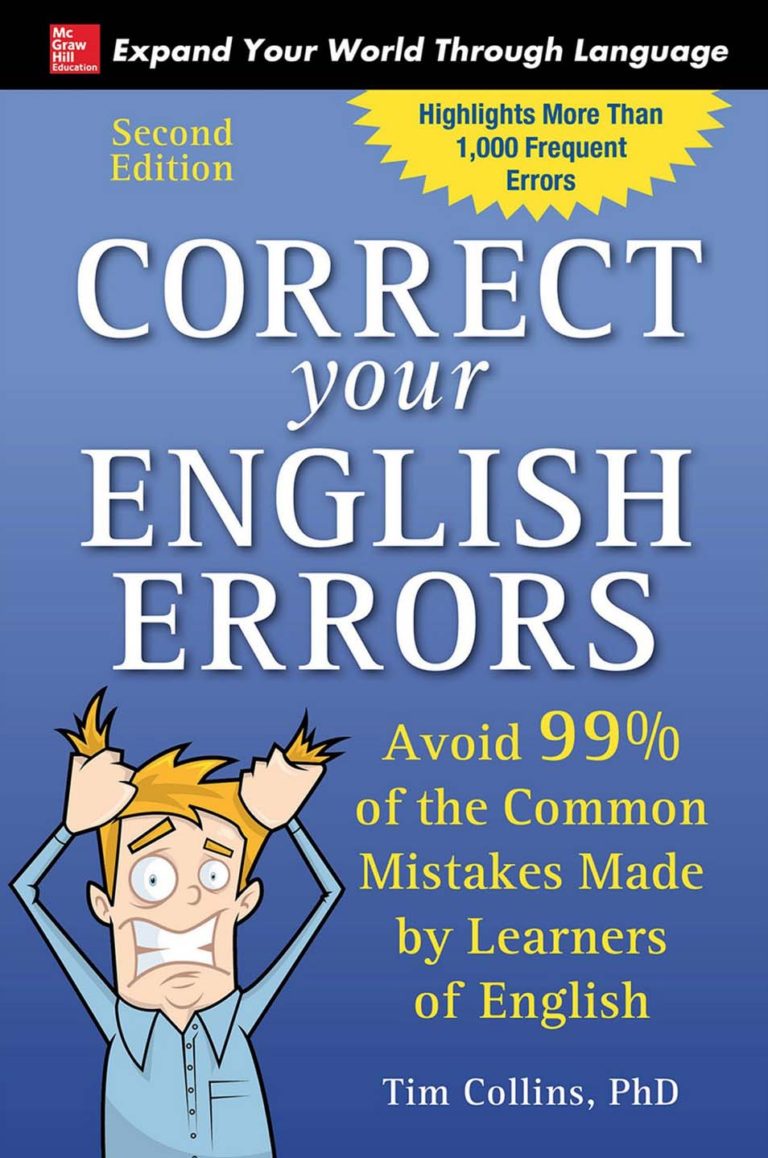 Speak and write English as if it were your native tongue!

Are you tired of making the same mistakes in English again and again? End the bad habits that can leave the people you talk to confused. Correct Your English Errors warns you of hundreds of typical errors learners make and explains the reasons behind the mistakes, so you can correct yourself in the future.

Improve your English skills with this fun and comprehensive guide and avoid all the common mistakes, such as:

Correct Your English Errors offers exercises covering all parts of grammar and provides review passages to check that you are error-free. Soon, biting your nails will be your only bad habit!

The purpose of this book is to identify the most common trouble spots for English language learners, to provide a basis for understanding why these trouble spots cause difficulties, and to offer guidance and practice for avoiding potential errors.

Many errors commonly made by speakers and learners of a second language are caused by transferring patterns and features of the native language to the new language. This happens in all aspects of language from pronunciation to word formation to sentence structure:

Another source of error is the learning process itself. That is, learners tend to over apply or misapply patterns and rules in the new language, do not learn exceptions to the rules, or do not apply the rules fully. Here are examples of these kinds of errors:

In this book, you will find help with these and many more common errors through explanation and example. You will become aware of potential trouble spots and learn how to break the habits, learn the necessary rules, and correct your mistakes. Several examples are given for each topic, followed by exercises that test your understanding and help you avoid the pitfalls.

This book is divided into two parts: Pronunciation and Spelling and Grammar. The largest section is Grammar, which identifies the various parts of speech in traditional terminology for ease of comprehension. Each term is explained and illustrated with multiple examples, providing necessary review or clarification.

The guidelines in this book are based on current standard usage in North America. However, usage varies according to region and other variables, and language is constantly changing. In cases where variants exist for formal and informal situations, details are provided.

Because individual words of a language are used in connection with other words, you will find that many topics are mentioned in more than one place. Extensive cross-referencing will help you find connections between related topics. Topics and lists are presented in logical order. For example, irregular verbs are presented in groups of verbs that follow similar patterns. Comparative and superlative forms of adjectives are presented in logical groupings according to how they are formed and spelled. Verb tenses are presented in order from the present tense to modal verbs. Complex syntactic patterns, such as the passive voice, are presented at the end of the volume, after all the prerequisite knowledge has been presented. In addition, the back of the book includes a comprehensive and detailed index, which serves as a guide to locating all the references to each topic, as well as a key with the answers to all the exercises.

Author hopes that the materials presented in this book will help you improve your proficiency in English and avoid the most common and vexing errors in English.

Now you can download Correct Your English Errors by Tim Collins – Avoid 99% of the Common Mistakes Made by Learners of English below link here: