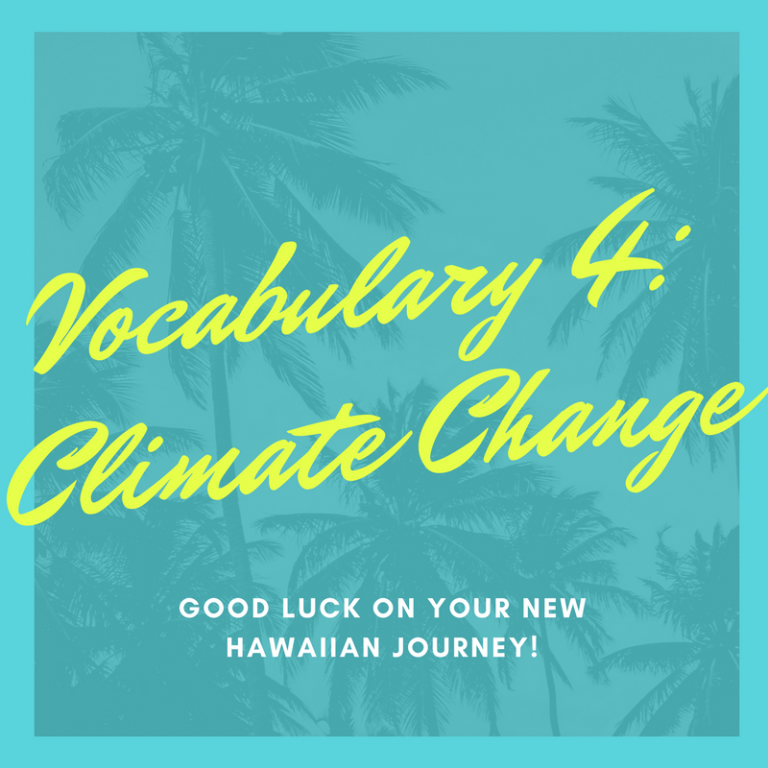 0.Talking about the size of the problem

Crisis: Climate change is a crisis that cannot be ignored by governments.

Record levels/amount: Despite the claims of some scientists, we are now producing record levels of CO2 and there is no dispute about the connection between this and global warming.

Disaster/disastrous: It is not an exaggeration to say that the effects of global warming are disastrous.

Global: Although some areas are relatively unaffected now, climate change is a global problem.

Irreversible: The major concern is that the effects of our actions on the climate will be irreversible.

Long-term: The effects of our use of fossil fuels today may last for generations and it is almost certain to have long-term consequences for humanity.

Ill-health: It sometimes goes unnoticed that there is a clear connection between climate change and ill-health.

Floods/rainstorms: One result of the rising temperatures is that floods and rainstorms are now a frequent occurrence.

The Polar ice cap: One major concern is that rising temperatures in the Arctic are causing the Polar ice cap to melt, which in turn is leading to rising sea levels.

Heatwaves and droughts: Most experts agree that there is an increased risk of heatwaves and other extreme weather conditions.

The natural world: Climate change will not only have a severe impact on people, but also devastate the natural world and lead to the extinction of important species.

Food shortages: We are already seeing in many parts of the world that climate change is leading to food shortages as a direct consequence of extreme weather conditions.

Housing/homelessness: One side-effect of rising sea levels is that more and more people who live by the coast will become homeless.

Conflicts/wars: If no action is taken on climate change, then it is likely that there will be more conflicts between nations, especially over water supplies.

Cost: It has been shown that any delay in making emission cuts will increase the cost of reducing carbon dioxide by almost 50%.

Human activity: It is no longer possible to say that human activity does not affect weather conditions.

Power stations: One of the leading causes of climate change is the number of dirty power stations using fossil fuels.

Illegal logging and deforestation: It should not be forgotten that illegal logging in the Amazon Basin is still a major factor in climate change.

Burning fossil fuels: Individuals can make a small contribution by not burning wood and other fossil fuels.

CO2: The root cause of much global warming is the amount of CO2 in the atmosphere.

Quick/immediate action: Any action should be immediate because this is not a problem that can be delayed.

Investment: There should be greater incentives to invest in renewables and to reduce the current reliance on fossil fuels.

Protest/campaign: Individuals can help force governments to act by taking part in legal protests against the continuing use of fossil fuels.

Avert: Investment in renewable energy will help avert the impact of the CO2 emissions.

Prevent: The only way to prevent the disaster is to reduce these emissions to zero.

Fight/combat: A way needs to be found to make combatting global warming that is affordable.

Sustainable and affordable: The key is to ensure that all countries around the world have the chance to adopt energy

5.How individuals can help:

Lobby MPs: If enough of us lobbied our MPs and other elected representatives then they would have to bring in legislation.

Share transport: We also have the responsibility to consider how we contribute to global warming by making unnecessary car journeys. We can always cycle to work, have a joint school run with other parents and even share a car on the daily commute to work.

Solar panels: There are an increasing number of solar panels on the market and these can not only reduce energy bills but also mean that less carbon fuel is consumed.

Heat insulation: Likewise, it is important that people insulate their houses well so that less gas and electricity is consumed.