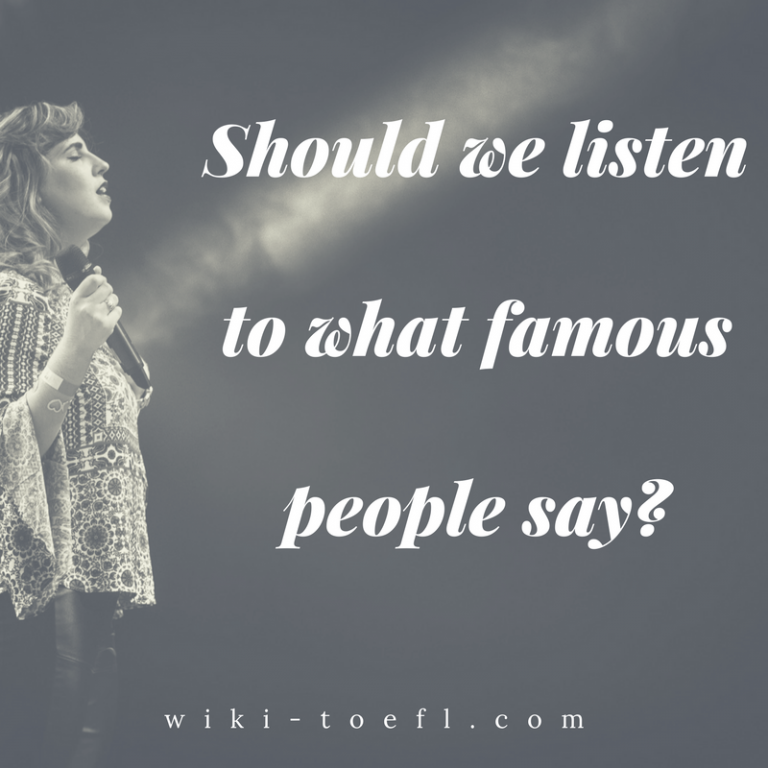 When famous people such as actors, athletes, and rock stars give their opinions, many people listen. Do you think we should pay attention to these opinions?

Everyone is entitled to have an opinion. When it comes to opinions, though there’s a difference between the majority of people and celebrities like actors, athletes and rocks stars . If you’ve an average person, only your family and friends care about your opinion. If your famous ,the whole world listens, or so it seems sometimes. Is this the way it should be ? I don’t think so.

We shouldn’t pay attention to famous people’s opinions just because of who they are. Being a famous basketball player doesn’t make someone an expert on environmental issues. However, that basketball player has a better opportunity to be heard than most people do. If that player feels very strongly about an issue ,he can use his fame to draw attention to it and get other people involved. That way they can draw attention and needed dollars to that issue.

People who are rich put their money behind a cause.. In the same way, famous people are using their most valuable asset. In their case, it’s not money, It’s their name recognition. Should people pay attention to what they think just because of who they are? I don’t think so. I also don’t think we should discount what they think just because of who there are. They have a right to their opinion. If their name draws people to that cause, all the better for the cause.

I think too often we categorized people and try to keep them in their place. Celebrities have brains and should be allowed to use them. When they ‘re advocating a cause, their opinion should be just one of money factors we use to evaluate that cause.