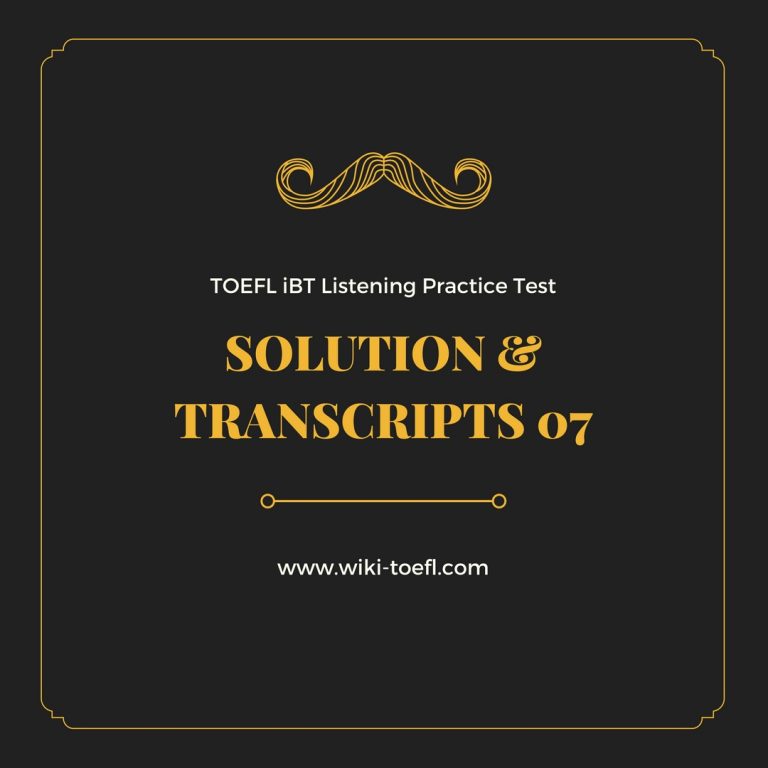 Narrator: Listen to part of a lecture in a psychology class.

The National Institute of Mental Health has been doing some interesting research on chemicals in the brain, the neurotransmitters, uh, by looking at brain images, and … at least some of the research has shown that the brain circuits responsible for sleep, appetite, concentration, and, uh, … and mood . , they are altered during depressed states. So. basically, we’ve concluded that depression is caused by chemical imbalances in the brain. But we re still unclear about what triggers those imbalances in the first place.

Some types of depression appear to be genetically inherited, but often there’s no family history of depression, or, conversely, a person with a (amity history may never develop a depressive disorder. So… It’s a thorny problem.

Here at the university, we’ve been studying a disorder called seasonal affective disorder. Norman Rosenthal first Identified this disorder In the mid 80s. The theory is that a decrease in light during the long winter months may be responsible for triggenng a chemical imbalance that in turn may cause depression among those people with a predisposition to depression. Supposedly, there’s an area of the brain called the suprachiasmatic nucleus, which is very close to the retina of the eye, so this area of the brain responds to light by sending a signal to the pineal gland, and the signal causes the gland to suppress the secretion of a hormone called melatonin. To make a long story short, the more light, the less melatonin in the blood

Okay, the acronym for seasonal affective disorder that’s being used in the field Is S.A.D. We didn’t come up with that, and in fact, I personally think that it’s an inappropriate way to reler to such a serious type of depression since it sounds rather mikf, and seasonal affective disorder can be a very severe and debilitating disorder for some people. In fact, in extreme cases, it’s life-threatening when patients become suicidal.

So anyway, as you can appreciate, tho winter here is very dark, cold, and gray. By spring, almost everyone is tired of the gloom, but for some people, those suffering with seasonal affective disorder, it can be a serious problem. People with seasonal affective disorder experience deep and prolonged depression throughout the winter months, with what looks like a spontaneous alleviation of the condition, when spring arrives. Before the disorder was identified, it was rather a mystery for friends and family since the depression appeared to vanish only to return several months later.

Now, although previous research isn’t conclusive, we do know that younger people, especially younger women, these women are at a higher risk for developing the disorder, and for being affected by It in a more severe form. If I recall, about 75 percent of those affected are women, with a typical age of onset about thirty years old. Other actors that contribute to the problem, apart from the long, dark days of course, these factors include heredity and stress.

What are the symptoms? Well, the usual spectrum of problems associated with depression anxiety, lack of concentration, a tendency to sleep more and eat more, cravings for food with a high sugar content. This may be accompanied by weight gain. On the other hand, some people actually lose their appetites ano tend to lose a significant amount of weight. We also see lower energy levels and for some people, a dull headache may accompany the problem.

So building on the research studies that identified the symptoms of seasonal affective disorder and the high–risk profile, we decided to undertake a longitudinal study of 120 subjects, and our research is really focusing on therapies that might help those people affected by S.A.D. Traditionally, psychotherapy has been used to identify and modify behaviors that contribute to depression, and it’s been somewhat successful with patients identified with seasonal affective disorder, especially when used in combination with relaxation and stress reduction therapies. Antidepressant drug therapy has also been proven to reduce depression in studies of people who had seasonal disorders. But we’ve been using phototherapy almost exclusively with the subjects in our studies. It’s very simple really. We’ve supplied each subject with a light box that provides the same type of natural lighting that would normally be shining through the window during the spring and summer. The subjects have been instructed to turn on the light box for two hours and then simply go about their activities in the room where the box is placed. They’re not supposed to use the box like a sun lamp no staring into the light, either with the eyes closed or open. They just ignore it once it’s turned on.

So … although we’re still evaluating our data from the first group of subjects, we have a few preliminary findings that I’ll share with you today. First, we think that it’s probably better to be exposed to the light box during the morning hours. Second, we’re noticing a relationship between sleep patterns and seasonal depression, so maintaining a regular schedule for sleep seems to be a helpful therapy in conjunction with the light treatment. We’re also fairly sure that the duration of light therapy can be modified for individuals. Some subjects who were exposed to the light for less than two hours did very well while others showed no evidence of relief until they reestablished the two-hour treatments. One interesting possibility that we’re working on is whether fluorescent lights might work as well as full spectrum light with the ultraviolet rays filtered out In our first trials, we used UV light exclusively, but now we have some trials underway with fluorescent light, and the results so far are encouraging. I’m also happy to report that there are few subjects who are experiencing side effects. There’s no evidence of eye damage. We’ve been careful to filter out any potentially damaging UV rays. And. in fact, the only negative side effect was minor headache that seemed to disappear after a few treatments.

So … next semester, we plan to begin the second stage of our studies, and we’ll be comparing the degree of depression on the part of subjects undergoing fight treatments with control groups who will receive either drug treatments or psychotherapy. What we really want to know is whether light treatments alone are as effective as the other options for therapy.

Narrator: Listen to part of a discussion in a physics class.

Okay, you’ll remember that when Einstein was doing his research, uh, the strong and weak forces they hadn’t been identified yet, but still, he had some questions about the two forces that were generally accepted at the time electromagnetism and gravity. You see. Einstein thought that nature, or rather a theory of nature, a good theory of nature had to be much simpler and, to use his term, more “elegant”. So he spent the next thirty years in an effort to arrive at a … a unified field theory that he assumed … that… that would demonstrate how these two forces were really defined by one underlying principle.

So. today, and that would be about sixty years later, a group of physicists believe that they are close to finding that principle in something called the theory of everything.

That’s okay. A lot of other equally distinguished physicists are also laughing at this idea. But, anyway, for the first time in the history of our field, we have, uh, at least, uh, a structure, a framework, with the potential to explain every fundamental characteristic of the universe. You see, until fairly recently, we’ve been conceptualizing the particles, that is, the protons, neutrons, electrons, quarks, and everything else… we’ve been viewing them as points very tiny points. But string theory assumes that if we could really take a look at the particles, and uh, that would have to be with technology that we haven’t yet discovered, but if we could, then we’d see that the particles aren’t points at all but… but strings and these strings are looped back into themselves. Look, think of the strings tike a very thin rubber band. Oh, and … and these strings vibrate.

So everything in the universe is made up of the same thing then? It’s all a combination of… of strings?

According to the theory, yes. But of course … we see differences, and those differences, uh, they’re accounted for because the vibrations of the strings are different.

Jim: So in physics, you buy into the theory of everything or… or what?

Wait a minute. So that would mean that we know it all now and there isn’t anything else to discover, right? Because, uh, everything is physics … everything is just a reaction between vibrating strings.

I see your point, but you could… you might look at it as a … as a … starting place to, uh, to build our knowledge. Dr. Blake, you said that if d be a strudure, didn’t you? So we’d have to fill in a lot of information but… we’d have a structure to start with. In my math dass we were talking about string theory because some of the recent advances in mathematics have been possible because of string theory.

True enough. And, string theory isn’t finished by any means. Ifs evolved from the beginning when we first started to think about it and, uh, the earty models that included both open strings and the closed strings that I just described to you the ones that look like a thin rubber band. And there’s a lot of discussion about vibration or rather various types of vibration. Then there’s the possibility of branes— b-r-a-n-e-s—which are kind of like closed strings with a membrane over them.

But all of this is theoretical, right? Because we don’t have the technology to observe strings—closed or open—and we certainly can’t verify that there are branes out there.

Sure. But there are some very complex and . . . and … persuasive, uh, mathematical formulas, and they’re presented in support of the theories. It isn’t like someone’s just dreaming this up without calculations.

But I don’t see why we should accept calculations when some of those calculations require us to think beyond what we can observe.

And many physicists would agree with you, Jim. String theory’s unverified. Richard Feynman wrote a very interesting book. The Character of Physical Law, and to Feynman, to him, the test of any scientific theory has to be whether the consequences agree with the measurements we take in experiments. Of course, that assumes that the experiment was performed correctly and, uh, that the calculations were done without error, but anyway, I think you see the point.

What do you think?

Jim: Well, I tend to be empirical scientist. I’m a biology ma|or. and I just warn to take something into the lab and dissect it.

Well, in fairness, any new theory has to begin as conjecture, but the real question is, can string theory pass through the developmental stages to a point where it can be verified or rejected. And, uh, these developments could be in the area of technology like Ellen suggests or perhaps that could be new methods of performing caculations and, uh, deriving the mathematical predictions. There are videos as well as animations and it includes a really good history of string theory, uh, but that’s not why I want you to see it. I think the site demonstrates where we need to go from here if we’re going to puesue an ultimate theory, a … a theory of everything, if you will. And it’s fairly objective so it should provide us with some interesting data for both sides of the debate.