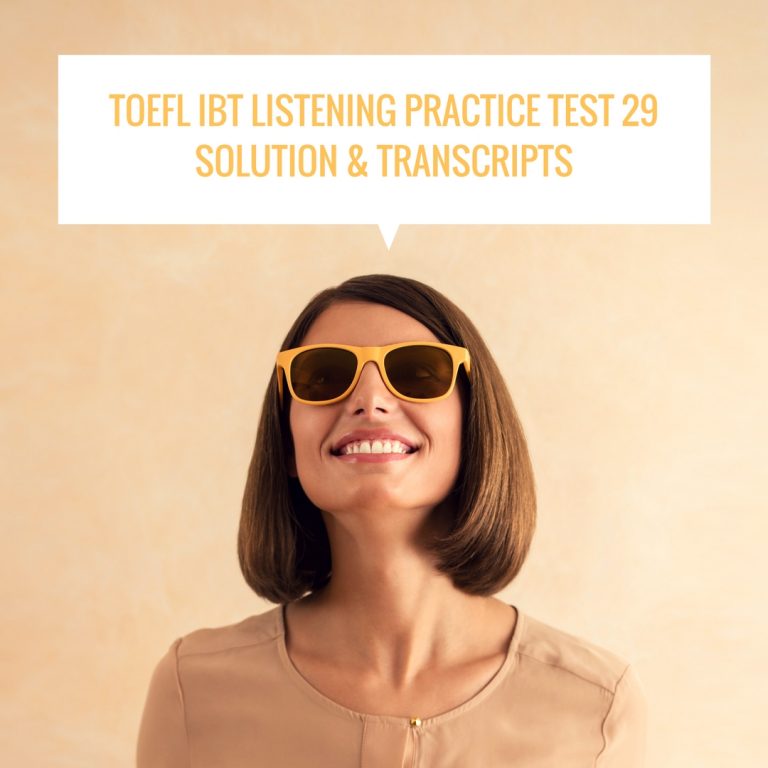 Listen to part of a lecture in a creative writing class.

All right everybody. The topic for today is, well… we’re gonna take a look at how to start creating the characters for the stories you’re writing. One way of doing that is to come up with what’s called a character sketch. I don’t mean a sketch like a drawing. I guess that’s obvious. It’s, um … a sketch is a way of getting started on defining your characters’ personalities.

To begin, how do we create fictional characters? We don’t just pull them from thin air, do we? I mean, we don’t create them out of nothing. We base them—consciously or unconsciously—we base them on real people. Or, we, um,.. blend several people’s traits … their attributes … into one character.

But when people think fiction, they may assume the characters come from the author’s I imagination. But the writer’s imagination is influenced by … by real people. Could be , anyone, so pay attention to the people you meet… someone in class, at the gym, that guy who’s always sitting in the corner at the coffeehouse … uh, your cousin who’s always getting into dangerous situations. We’re pulling from reality … gathering bits and pieces of real people. You use these people … and the bits of behavior or characteristics as a starting point as you begin to sketch out your characters.

Here’s what you should think about doing first. When you begin to formulate a story, make a list of interesting people you know or have observed. Consider why they re unique … or annoying. Then make notes about their unusual or dominant attributes. As you create fictional characters, you’ll almost always combine characteristics from j several different people on your list to form the identity and personality of just one character.

Keeping this kind of character sketch can help you solidify your character’s personality so that it remains consistent throughout your story. You need to define your characters … know their personalities so that you can have them acting in ways that’re predictable … consistent with their personalities. Get to know them like a friend. You know your friends well enough to know how they’ll act in certain situations, right?

Say you have three friends, their car runs out of gas on the highway. John get upset, Mary remains calm, Teresa takes charge of handling the situation. And let’s say… both John and Mary defer to her leadership. They call you to explain what happened. And when John tells you he got mad, you’re not surprised because he always gets frustrated when things go wrong. Then he tells you how Teresa took charge, calmed him down, assigned tasks for each person, and got them on their way. Again you’re not surprised. It’s exactly what you’d expect. Well, you need to know your characters like you know your friends … if you know a lot about a person’s character it’s easy to predict how they’ll behave. So if your characters’ personalities are well defined, it’ll be easy for you as the writer to portray them realistically .. . believably in any given situation.

While writing character sketches, do think about details. Ask yourself questions, even if you don’t use the details in your story … uh, what does each character like to eat what setting does each prefer… the mountains? The city? What about educational background? Their reactions to success … or defeat? Write it all down.

But here I need to warn you about a possible pitfall. Don’t make your character into a stereotype. Remember, the reader needs to know how your character is different rom other people who might fall in the same category. Maybe your character loves the mountains and has lived in a remote area for years. To make sure he’s not a stereotype, ask yourself how he sees life differently from other people who live in that kind of setting. Be careful not to make him into the cliché of the rugged mountain dweller.

Listen to part of a lecture in an earth science class.

We’re really just now beginning to understand how quickly drastic climate change can take place. We can see past occurrences of climate change that took place over just a few hundred years. Take, uh, the Sahara desert… in Northern Africa.

The Sahara was really different 6,000 years ago. I mean, you wouldn’t call it a tropical paradise or anything—ah, or maybe you would if you think about how today in some parts of the Sahara it only rains about once a century. Um, but basically, you had greenery and you had water. And what / find particularly interesting, amazing, really what really indicates how un-desert-like the Sahara was thousands of years ago, was something painted on a rock: prehistoric an—hippopotamuses. As you know, hippos need a lot of water, and hence … Hence what?

They need to live near a large source of water year-round.

But how’s that proof that the Sahara used to be a lot wetter? I mean, the people who painted those hippos … well, couldn’t they have seen them on their travels?

OK, in principle they could, Carl. But the rock paintings aren’t the only evidence. Beneath the Sahara are huge aquifers, basically a sea of fresh water that’s perhaps a million years old, filtered through rock layers. And, ah, and-and then there s fossiized pollen from low shrubs and grasses that once grew in the Sahara. In fact these plants still grow ah, but hundreds of miles away in more vegetated areas. Anyway, it s this fossilized pollen, along with the aquifers, and the rock paintings-these three things are all evidence that the Sahara was once much greener than it is today, that there were hippos and probably elephants, and giraffes, and so on.

Hovv did it happen? Well now we’re so used to hearing about how human activities are affecting the climate, right; but that takes the focus away from the natural variations in the Earth’s climate. Like the Ice Age, right? The planet was practically covered In ice just a few thousand years ago. Now, as far as the Sahara goes, there s some recent literature that points to the migration of the monsoon in that area.

What do I mean? OK. A monsoon is a seasonal wind that can bring in a large amount of rainfall. Now, if the monsoon migrates, well that means the rams move to another area, right?

So what caused the monsoon to migrate? Well, the answer is the dynamics of Earth s motions—the same thing that caused the Ice Age, by the way. The Earth’s not always the same distance from the Sun. And it’s not always tilting toward the Sun at the same angle. There’re slight variations in these two parameters. They’re gradual variations, but their effects can be pretty abrupt, and can cause the climate to change in just a few hundred years.

Well, yeah, considering that other climate shifts take thousands of years, this one s pretty abrupt. So these changes in the planet’s motions, they caused the climate to change; but it was also compounded. What the Sahara experienced was a sort of run-away drying effect.

As I said, the monsoon migrated south-so there was less rain In the Sahara. The land started to get drier— which in turn caused a huge decrease in the amount of vegetation, because vegetation doesn’t grow as well in dry soil, right? And then, less vegetation means the soil can’t hold water as well-the soil loses its ability to retam water when it does rain. So then you have less moisture to help clouds form … nothing to evaporate for cloud formation. And then the cycle continues-less ram, drier soil, less vegetation, fewer clouds, less rain, etcetera, etcetera.

But what about the people who made the rock paintings?

Good question. No one really knows. But there might be some connection to ancient Egypt. At about the same time that the Sahara was becoming a desert mmm 5,000 years ago, Egypt really began to flourish out in the Nile River Valley. And that not that far away. So it’s only logical to hypothesize that a lot of these people miarstJ to the Nile Valley when they realized that this was more than a temporary drought And some people take this a step further—and that’s OK, that’s science—and thev ypothesize that this migration actually provided an important impetus in the development of ancient Egypt. Well, we’ll stay tuned on that.