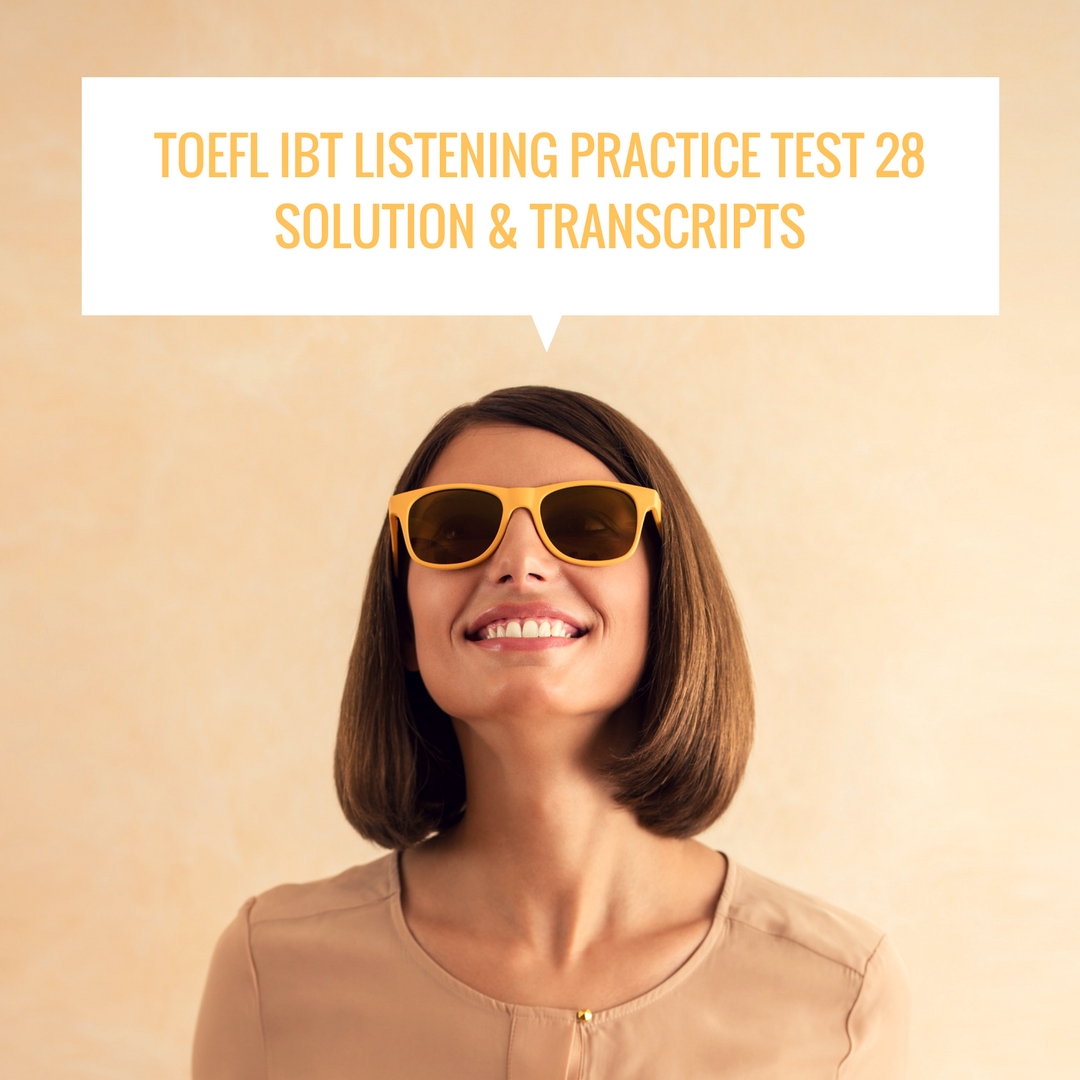 Listen to part of a lecture in a chemistry class.

OK, I know you all have a lot of questions about this lab assignment that’s coming up, so I’m gonna take a little time this morning to discuss it.

So you know the assignment has to do with spectroscopy, right? And your readings should help you get a good idea of what that’s all about. But let’s talk about spectroscopy a little now, just to cover the basics.

What is spectroscopy? Well, the simplest definition I can give you is that spectroscopy is the study of the interaction between matter and light. Now visible light consists of different colors, or wavelengths, which together make up what’s called a spectrum—a band of colors, like you see in a rainbow. And all substances—all forms of matter— can be distinguished according to what wavelengths of light they absorb and which ones they reflect. It’s like—well, every element has what we’d call its own spectral signature; if we can read that signature, we can identify the element. And that’s exactly what spectroscopy does.

Now laser spectroscopy, which is the focus of your assignment, works by measuring, very precisely, what parts of the spectrum are absorbed by different substances. And it has applications in a lot of different disciplines. And your assignment will be to choose a discipline that interests you and devise an experiment. For example, I’m gonna talk about art—I’m interested in art. And to me, it’s interesting how spectroscopy is used to analyze art.

Let’s say a museum curator comes to you with a problem. She s come across this painting that appears to be an original—say a Rembrandt—and she wants to acquire it for her museum. But she’s got a problem: She’s not absolutely certain it’s an original. So what do you do? How do you determine whether the painting’s authentic?

So first of all, you’ll need to know the techniques Rembrandt used when he applied paint to canvas-his brushstrokes, how thickly he applied his paint-so you’d need to work with an art historian who has expert knowledge of Rembrandt’s style. You’d have to know when he created his paintings, um, what pigments he used-in other words what ingredients he used to make different colors of paint. ‘Cause the ingredients used in paints and binding agents—plus varnishes, finishes, what have you—have changed over time. Since you’re trying to verify if it’s a Rembrandt, the ingredients in the pigment would need to have been used during Rembrandt’s lifetime, in the seventeenth century. And that’s where chemistry comes in. You’ve got to find out what’s in those pigments—learn their composition. And that requires lab work—detective work, really—in a word, spectroscopy.

So how do we use spectroscopy? Well, we put an infrared microscope—a spectroscope—on tiny, tiny bits of paint, and using ultraviolet light, we can see the spectral signature of each component part of the pigment. Then we compare these signatures with those of particular elements, like zinc or lead, to determine what the pigment was made of.

So you can see why this type of analysis requires a knowledge of the history of pig-ments, right? How and when they were made. Say we determine a pigment was made with zinc, for example. We know the spectral signature of zinc, and it matches that of the paint sample. We also know that zinc wasn’t discovered until the eighteenth century. And since Rembrandt lived during the seventeenth century, we know he couldn’t’ve painted it.

Now, spectroscopy has a very distinct advantage over previous methods of analyzing artworks because it’s not invasive—you don’t have to remove big chips of paint to do your analysis, which is what other methods require. All you do is train the microscope on tiny flecks of paint and analyze them.

Now, a word or two about restoration. Sometimes, original artworks appear questionable or inauthentic because they’ve had so many restorers add touch-up layers to cover up damage—damage from the paint having deteriorated over time. Well, spectroscopy can reveal the composition of those touch-up layers too, so we can find out when they were applied. Then, if we want to undo some bad restoration attempts, we can determine what kind of process we can use to remove them—to dissolve the paint and uncover the original.

Listen to part of a lecture in a literature class.

Now, we can’t really talk about fairy tales without first talking about folk tales … because there’s a strong connection between these two genres, these two types of stories. In fact, many fairy tales started out as folktales.

So, what’s a folk tale? How would you characterize them? Jeff?

Well, they re old stories, traditional stories. They were passed down orally within cultures, from generation to generation, so they changed a lot over time; I mean, every storyteller, or maybe every town, might have had a slightly different version of the same folktale.

That’s right, there’s local difference, and that’s why we say folktales are communal.

By “communal,” we mean they reflect the traits and the concerns of a particular community at a particular time. So essentially the same tale could be told in different communities, with certain aspects of the tale adapted to fit the specific community. Um, not the plot… the details of what happens in the story would remain constant; that was the thread that held the tale together. But all the other elements, like the location or characters, might be modified for each audience.

OK, so what about fairy tales? They also are found in most cultures, but how are they different from folktales? I guess the first question is what is a fairy tale? And don’t anyone say, “a story with a fairy in it.” Because we all know that very few fairy tales actually have those tiny magical creatures in them. But what else can we say about them? Mary?

Well, they seem to be less realistic than folktales. Like they have something improbable happening—a frog turning into a prince, say. Oh, that’s another common element, royalty … a prince or princess. And fairy tales all seem to take place in a location that’s nowhere and everywhere at the same time.

What’s the line, ah—how do all those stories start? “Once upon a time, in a faraway land …” In the case of folktales, each storyteller would specify a particular location and time, though the time and location would differ for different storytellers. With fairy tales, however, the location is generally unspecified, no matter who the storyteller is … that “land faraway …” We’ll come back to this point in a few minutes.

Um, I thought a fairy tale was just the written version of an oral folktale.

Well, not exactly, though that is how many fairy tales developed. For example, in the late eighteenth century, the Grimm brothers traveled throughout what’s now Germany recording local fontales. These were eventually published—as fairy tales— but not before undergoing a process of evolution.

Now, a number of things happen when an oral tale gets written down. First, the language changes, it becomes more formal, more standard some might say less colorful. It’s like the difference in your language depending on whether you’re talking to someone or writing them a letter.

Second, when an orally transmitted story is written down, an authoritative version, with a recognized author is created. The communal aspect gets lost; the tale no longer belongs to the community; it belongs to the world, so to speak. Because of this,  elements like place and time can no longer be tailored to suit a particular audience, so they become less identifiable, more generalizable to any audience.

On the other hand, descriptions of characters and settings can be developed more completely. In fontales, characters might be identified by a name, but you wouldn’t know anything more about them. But in fairy tales, people no longer have to rpm ber plots they’re written down, right? So more energy can be put into other elem of the story, like character and setting. So you’ get more details about the charart and about where the action takes place, what people’s houses were like whether t ey re small cabins or grand palaces … And it’s worth investing that energy because the story, now in book form, isn’t in danger of being lost, those details won’t be forgotten. If a folktale isn’t repeated by each generation, it may be lost for all time But with a fairy tale, it’s always there in a book, waiting to be discovered again and again.

Another interesting difference involves the change in audience—who the stories are meant for. Contrary to what many people believe today, folktales were originallv intended for adults, not for children. So why is it that fairy tales seem targeted toward children nowadays?